Bicyclists Get a Sharrow on Oakland’s 40th Street

The sharrow on 40th Street in Oakland.

Oakland’s 40th Street is looking decidedly more colorful these days. If you’ve been wondering what the bright-green five-foot-wide band painted on the road is, the answer is: a sharrow. It’s part of an experimental pilot program that aims to improve bicycle access on 40th Street, which connects Emeryville to Oakland’s Piedmont Avenue and runs past MacArthur BART, one of the most heavily used BART stations by bicyclists. The term “sharrow” directly reflects its intent: to draw attention to the shared use of the street by bicyclists and vehicles.

It took the City of Oakland and key stakeholders approximately seven years to compromise on and implement the sharrow. Jason Patton, manager of the City of Oakland’s Bicycle and Pedestrian Program, explained that the only way to create a separate bike lane on 40th Street would have been to remove a lane or part of the median. “We couldn’t get agreement on what would be removed,” he said. 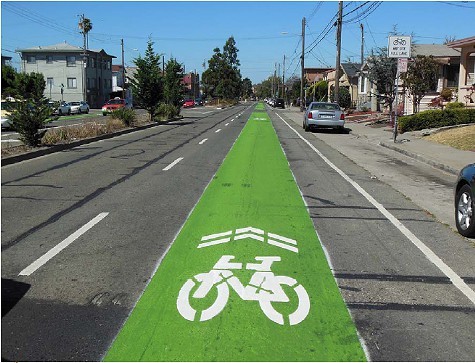 Renee Rivera, the executive director of East Bay Bicycle Coalition, said that the coalition initially pushed for the creation of a separate bike lane, but neighbors were opposed to getting rid of the median on 40th Street, which they had enhanced with plants and continue to maintain. The coalition worked closely with the city to reach an agreement, which Rivera described as “not an ideal situation.”

Currently, the lane on 40th Street nearest to the sidewalk is too narrow to be comfortably shared by both a bicyclist and a motorist. Patton said that vehicle code allows bicyclists to use the full lane if needed to ensure his or her safety — and that in reality, that means motorists need to follow at a safe distance or change lanes to pass. But that doesn’t always happen. (A recently signed state law will require motorists to give bicyclists three feet of clearance; it goes into effect next year.)

“The interesting thing about this project is that it doesn’t change anything about how people should be using 40th Street,” said Patton. “It just makes the existing law very visible. None of the treatments the city has done change the legal use of the street. It’s simply that oftentimes, people aren’t following the law.”

Cities like Long Beach and Salt Lake City have also begun using sharrows, but the jury’s still out on their effectiveness. Oakland’s Public Works Agency will be gathering data about how the sharrow is used — like whether it encourages more people to commute by bike and if it reduces collisions — in partnership with the Federal Highway Administration and California Traffic Control Devices Committee.

“Even if the [sharrow] is successful, it’s still a Plan B or C,” said Rivera. “Wherever possible, we want a separate bike lane … ideally with a buffer zone against the curb. Shared treatment is only for those places where we cannot do anything else.”

The sharrow runs along 40th Street between Adeline Street and Martin Luther King Jr. Way, and then again from Telegraph Avenue to Webster Street. It is being paid for by a grant from the Regional Measure 2 Traffic Relief Plan, which was passed in 2004, raising the bridge toll by a dollar to pay for projects that reduce congestion. Patton said no more sharrows are planned at this time until the analysis on the existing one is completed. In the meantime, bike lanes are being painted green in other parts of the city.

What do you think of the sharrow?