Best Place to Get Lost 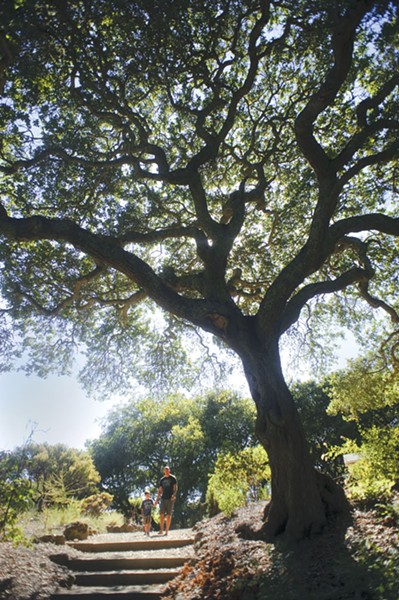 There are many ways to get lost in the East Bay hills: literally, by wandering Tilden or Redwood Regional Park's mazes of narrow trails without a map; or figuratively, by losing oneself in the natural solace of Sibley Volcanic Preserve or the grand redwoods of Joaquin Miller Park. But there's another option, a hybrid of the two, which may offer the best escape of all. The UC Botanical Garden, situated on a northwest-facing slope in Strawberry Canyon above UC Berkeley, features 34 densely planted acres of meticulous landscapes corresponding to various regions of the world: Asia, Australasia, Eastern North America, the Mediterranean, Mexico/Central America, New World Desert, South America, and Southern Africa. Each functions as a mini-park of its own, with trails winding among gardens featuring plants and trees native to the region. Follow a map provided at the ticket booth, or wing it and see where you land. Either way, it's easy to imagine yourself travelling the world and viewing each locale's indigenous fauna in its natural setting. You may forget you're in Berkeley — at least until you glance west to see the bay and the Golden Gate laid out before you.

Categories We Didn't Think Of