This year’s theme is ‘Sankofa,’ which explores revisiting what has been left behind to strengthen the community. 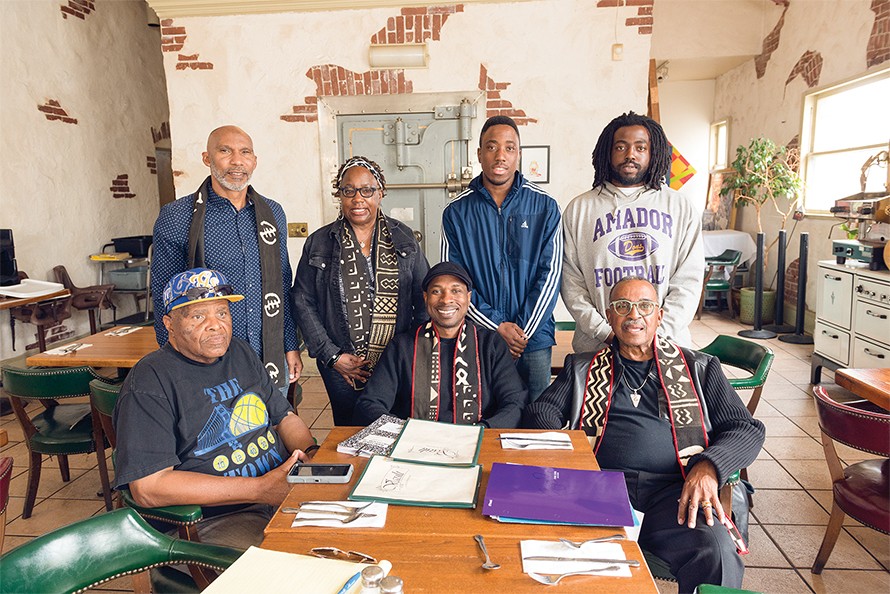 Martin Luther King Jr. Way in Berkeley only became a tribute to the Civil Rights leader in 1984. Before then, Grove Street represented Berkeley’s dark history of rampant discriminatory housing practices. For decades, it served as a geographical line above which African-Americans and Japanese immigrants could not settle.

Delores Cooper worked as part of a community effort to rename Grove Street back in the 1980s. Since, she has witnessed Berkeley’s demographics change. The Black population — the majority clustered in South Berkeley — dwindled from about 24 percent in 1970 to 10 percent in 2010, largely due to surging rents. And that’s why Cooper believes celebrations like Berkeley’s annual Juneteenth festivities are all the more important: to celebrate freedom, build community, and honor history.

“There’s a lot of things about the Black community that become negative at times, a lot about our history that’s hidden,” Cooper told the Express. “It’s a way for us to celebrate our history and celebrate who we are ... and be reminded and be proud that we endured slavery.”

In 1986, through the committee that Cooper worked with to rename Grove Street, she became involved in organizing Berkeley’s first official celebration of Juneteenth, which commemorates June 19, 1865: the date on which slaves in Galveston, Texas, found out they were free.

It took time for the information to reach slaves in regionally secluded Texas, far from the Civil War battlefields. The slave population in Galveston was the last to hear the news, more than two years after the Emancipation Proclamation.

Berkeley Juneteenth Cultural Celebrations is a nonprofit formed by RD Bonds to bolster community pride and South Berkeley businesses, and it has put on the festival every year since 1987 (with a one-time hiatus in 2008). It is the most well-established and consistent Juneteenth celebration in the Bay Area, with nearly 15,000 congregating at a three-block stretch of South Berkeley over the course of the day.

Berkeley’s festival offers everything from arts and crafts, food, music, and dance to health screenings, rock climbing, and historical exhibitions. This year, the two live-music stages will feature Alvon Johnson, Samba Funk, Sistahs of the Drum, and The Chris Black Experience, among others.

“It’s about people coming out and having a good time, and seeing old faces from the neighborhood,” explained current board chairman Orlando Williams.
Williams says the Berkeley he was born and raised in, which was “kind of a melting pot,” is very different from the one he sees now: gentrified, and a place where the “communication lines aren’t there.”

But Juneteenth is a way to keep community involved. And, over time, festival attendance has risen, with its footprint now extending an extra block. This year is the thirtieth annual celebration in Berkeley.

Juneteenth began in Texas, though it’s grown nationally over time, according to UC Berkeley history professor Waldo Martin. Black migration from the South to California boomed during World War II, and in particular from Texas and Louisiana.

Martin said that, in the South, ceremonies such as Juneteenth tended to come with those who migrated west to build and sustain identity and community.

Martin, who studied at UC Berkeley back in the 1970s, remembers his neighbors in South Berkeley throwing parties for Juneteenth. Having grown up in the deep South, Martin was amazed at Berkeley’s cultural cohesion: He celebrated Jewish, Chicano, and Black holidays. “I went to a lot of everything,” he said.

Cooper agreed that Juneteenth has morphed into a celebration about diversity. “It’s kind of an introduction to other cultures and to our culture,” he explained.

The city has attempted to move the festival to other locations, like Civic Center Park or Caesar Chavez Park, over the years. And, one time, the city even banned hip-hop from the festival stages. In 2008, the festival was actually canceled, due to the city’s security concerns about the South Berkeley location. But Williams said it’s crucial that Juneteenth remain rooted in South Berkeley, where Berkeley’s Black population is concentrated.

“If we moved it, it would fracture into a less-attended event,” Williams said. People know Juneteenth as a staple of South Berkeley, and it is ideally situated by the Ashby BART station. Moreover, the neighborhood’s rich past, known as the Alcatraz-Adeline Corridor or the Lorin District, is important to preserve, Williams added.

For example, in the 1960s, the city was planning for new BART tracks that would run above ground in South Berkeley. Mable Howard, a community activist, spearheaded litigation and halted construction for nine months, until BART officials agreed to build underground, so that BART wouldn’t divide and disrupt the neighborhood.

Cooper is deeply interested in the key historical figures instrumental in the development of South Berkeley and the once-thriving Black community; she puts together the festival’s historical exhibit and details the work of Black community leaders in Vision Magazine.

Recently, a movement successful in renaming the South Berkeley branch of the public library after Tarea Hall Pittman joined the cadre of community efforts to carve out a space to honor Berkeley’s notable African-American leaders. Pittman, a Civil Rights leader, led the charge to build a new library for South Berkeley at Russell Street and Martin Luther King Jr. Way — then Grove Street — when the city was still segregated.

Pittman worked extensively in the NAACP, serving several years as the western regional director, and created and hosted a radio program to highlight the history and work of African-Americans.

The theme of this year’s Juneteenth is “Sankofa,” an African symbol of a bird with its head turned backward. It represents bringing back what has been lost, or left behind, to strengthen the community, Cooper explained.

Fittingly, the theme of looking at the past fuels solidarity today. “[Juneteenth] is not only a celebration of a specific moment and specific heritage, but a rich diversity that helps to make this a very special place,” Martin added.