An East Bay nonprofit health center that provides care to low-income and uninsured patients closed its doors this week because of financial troubles — and left thousands of confidential medical records behind. The Berkeley Health Center for Women and Men, a clinic located at 2908 Ellsworth Street in South Berkeley, is part of the Bay Area Consortium for Quality Health Care, a private nonprofit that filed for bankruptcy last August. Extensive court records filed in the bankruptcy case and state and county reports about the nonprofit revealed that the organization, which has received substantial public funding over the years, has been plagued by financial mismanagement and protracted disputes — a controversy I covered in last week's issue (see "The Collapse of Berkeley Health Center").

After a federal bankruptcy judge officially terminated the center's Berkeley lease in January, due to the nonprofit's continued inability to pay off its debts, the center refused to shut down and vacate the property. At a hearing earlier this month, the judge then ordered the center to immediately vacate the premises and sent the US Marshals Service in last week to deliver an eviction notice (see the official order here). Federal marshals showed up yesterday to enforce the order and ensure that the tenant had left the property. I stopped by the center late yesterday afternoon, and no Bay Area Consortium officials were on site — but stacks of confidential medical records were. 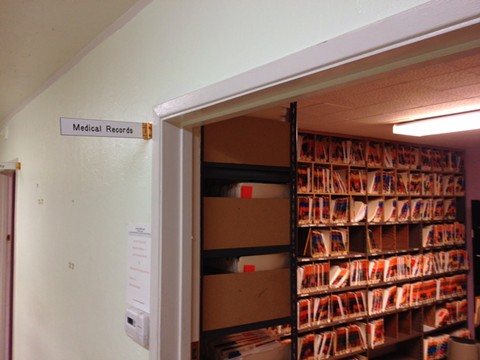 Hab Siam, a representative for the landlord, SLG 2908 Ellsworth LLC, was at the facility and let me inside. Although the center apparently moved out some of its possessions, a room labeled "medical records" appeared largely untouched. Shelves throughout that room were filled with folders that said "Confidential Patient Record for Authorized Personnel Only" on them. Several other rooms in the facility also contained boxes and filing cabinets that appeared to have personal patient records in them.

As I noted in my story last week, US Bankruptcy Court Judge William Lafferty had scolded the Bay Area Consortium's executive director, Gwen Rowe-Lee Sykes, for failing to prepare to close the facility. The judge repeatedly emphasized that Sykes has known for months that a shutdown was a very real possibility. (The nonprofit owes hundreds of thousands of dollars to the state and federal governments and to its landlords, employees, vendors, and consultants, according to bankruptcy court records). Despite these debts, the center has seemingly failed to inform patients about the closure and also apparently has not made arrangements to handle confidential documents at the facility. At the recent hearing, Lafferty also noted that months earlier, the court had given the consortium an opportunity to appoint an ombudsman to represent patients during the bankruptcy process, but the nonprofit did not follow through. When hospitals and health centers close, there are procedures they are supposed to follow to ensure that patients are informed and can access their personal files.

Here are some more photos from inside the facility yesterday: 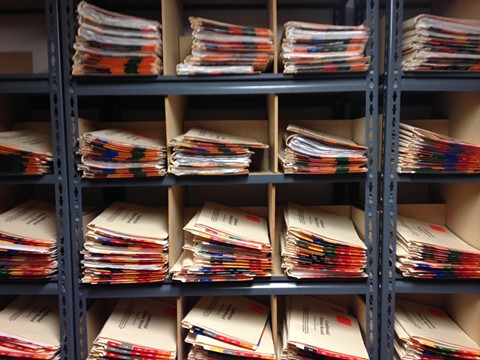 Siam told me that he saw at least eight patients show up yesterday to the clinic unaware of the closure. Several of them said they recently had their medical records transferred to the facility, according to Siam. As of this morning, callers to the Berkeley Health Center are greeted by a standard message that makes no mention of the current situation and gives the center's hours and other generic information as if it were still operating at that site. The consortium's website — bacfqhc.snappages.com — also provides no information about the closure. One patient yesterday had traveled from Contra Costa County just to cancel an appointment, Siam said. The center's voicemail is currently full and not accepting messages — and the Berkeley Health Center charges $40 for missed appointments or late cancellations.

It appears that consortium officials have done little to inform their own workers about the situation as well. Siam said two individuals who identified themselves as "externs" with the nonprofit also showed up yesterday, apparently unaware that the lease had been terminated and that the center had been forced to shut down. Those externs arrived around the same time that federal marshals did, he said.

The clinic had even posted a sign on its door saying it was closed for President's Day and would reopen after the holiday:

The judge's recent order said that the consortium had to remove all of its personal property by yesterday. Any possessions that remain on the site past Tuesday "can be sold or otherwise disposed of unless Bay Area Consortium for Quality Health Care pays SLG 290 Ellsworth, LLC the reasonable cost of storage and takes possession of the personal property within 15 days." Siam, however, said that neither he nor attorneys for SLG 290 Ellsworth have heard from anyone affiliated with the nonprofit with any requests about the medical records or other possessions.

Here's a sign that is now taped to the center's door:

I did speak briefly today with Dr. Deborah Wafer who had written a letter to bankruptcy court in January identifying herself as the "medical director" for Berkeley Health Center and pleading that the judge not terminate the consortium's lease. She told me this morning that she is a volunteer for the consortium and said that the organization is making arrangements to transfer the medical records from the Ellsworth site. She said that there will be a new location where the organization will be able to treat patients — but she declined to tell me where. "Care will be continued. There will be no question about that," she said.

"Medical records will be available," Wafer continued, adding, "Volunteer staff will be ... taking care of business."

When I asked her how the consortium or Berkeley Health Center could continue operating in the wake of the bankruptcy case and the massive debts, she said she could not speak to the organization's finances.

She noted that patients have been calling her seeking information, and she said that patients should call the Berkeley Health Center's general line — 510-843-6194 — which will transfer to a new line sometime later today where they can get information about future care. She said she could not say how soon patients might have access to care at a new facility.

For more on the Bay Area Consortium's bankruptcy case, check out "The Collapse of Berkeley Health Center."