Berkeley Greenlights BART Housing in Principle, But the Devil Is In the Details.

Some observers are prioritizing maximum housing density, but other residents near the Ashby station are pushing for 100 percent affordability. 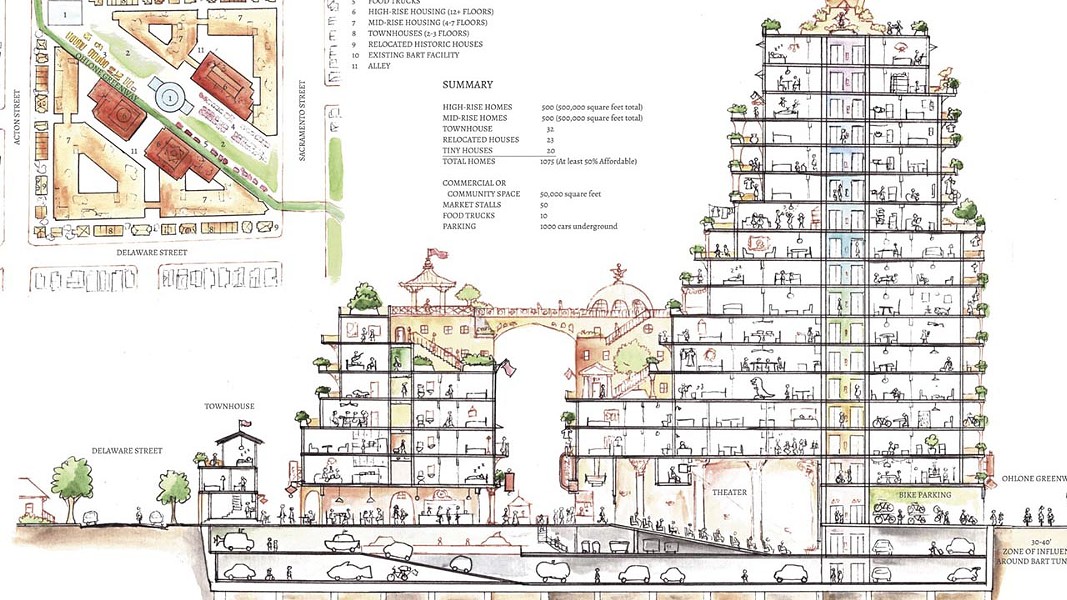 Images courtesy of Jesse Areguin At an October “visioning event,” planners, architects and others suggested what they would like to see.

Berkeley community organizations are getting ready to push their competing priorities in the next stage of planning for housing near the Ashby and North Berkeley BART stations. Last month, in a rare unanimous vote, the city council approved a Memorandum of Understanding with BART to go ahead with the process. But the memorandum is just a plan to make a plan. It includes no specifics: how many units of housing, how many will be affordable and to whom, how tall the buildings will be, what they will look like, and what happens with riders who now park on the lots that will be repurposed for housing.

Just about everyone involved agrees that they want housing at the BART stations, and that as much as possible should be "affordable," although that can mean a range of things. All agree that "transit-oriented development" is a key strategy for tackling both the housing crisis and climate change. But different groups have very different visions.

Leading the campaign to approve the agreement was a coalition of pro-development organizations including North Berkeley Now, South Berkeley Now, and Berkeley Neighbors for Housing and Climate Action. Libby Lee-Egan of North Berkeley Now said her group knocked on a lot of doors in the neighborhood around the station and polled its members. "The consensus was that density was the most important goal," Lee-Egan said. "We want as many homes there as possible."

For the Friends of Adeline, the hope is that 100 percent of the housing built at Ashby BART be affordable to low-income people, and that it be built with "community-driven, nonprofit development," according to their letter to the city council. Meanwhile members of the North Berkeley Neighborhood Alliance are concerned about the possibility of high-rise buildings and want to make sure development there will harmonize with the neighborhood.

Lee-Egan of North Berkeley Now said she's lived in the neighborhood near the BART station about six years and "always felt the surface parking lot was underutilized." She said her group emphasizes density because "it's a more efficient way to build more housing. And a ton of people could just hop on BART and get to work."

Besides, she said, in the neighborhood surrounding the North Berkeley BART station, "there are hardly any places to get groceries on the way home. You're not going to get cool retail there unless more people can walk to it."

Darrell Owens said, "I grew up three blocks from North Berkeley BART and I've seen the gentrification and displacement." The neighborhood "used to be affordable, mostly African American like myself." Now the people who once lived there have moved out to Vallejo, Antioch, Stockton. Owens said North Berkeley Now wants "first and foremost to maximize the number of affordable units" built at the station, "not the percentage."

Owens is a policy analyst for California YIMBY, a statewide organization funded mainly by high-tech and real estate businesses, which argues that building as much housing as possible will lower costs by increasing the supply to match the demand. But he said, "my job has nothing to do with my activism."

Lee-Egan agrees that her group wants "as many units to be as deeply affordable as possible." But she cautioned that making the housing 100 percent affordable, as some advocate, "would be really expensive — the project could get bogged down trying to get the financing together." And Rashi Kesarwani, who represents North Berkeley on the city council, noted in a recent newsletter that "market-rate units are an important part of the equation because — all other things being equal — they cross-subsidize the creation of a greater number of below-market-rate units than would otherwise be created by available affordable housing funds alone." That's because Berkeley's inclusionary zoning law requires market-rate developers to include at least 20 percent affordable units or pay a fee to support affordable housing elsewhere.

At the other end of town, South Berkeley residents in the Friends of Adeline group want nothing less than 100 percent of the housing built at Ashby station to be affordable for low-income people. In a letter to the city council, the group said, "This will obviously require a different approach than what is currently used to develop housing." The letter calls for "community-driven, nonprofit development... utilizing alternative funding sources/investors."

Building on BART-owned land is a unique opportunity, said Friends of Adeline member Margy Wilkinson. "If we expect to achieve the city's and BART's goal of significant low-income housing in areas surrounding the BART stations, the only way possible is to build on public land that has no cost."

Affordable housing requires subsidies, and public funding is very limited. But Ben Bartlett, who represents South Berkeley on the city council, pointed out that in Berkeley, "we are blessed with some public financing resources we created ourselves." Ballot measures passed in the last three years set up two ways to fund affordable housing: a $135 million bond fund and an increased transfer tax on the most-expensive one-third of real estate sales. In addition, the city increased the gross-receipts tax on owners of five or more housing units to fund services, including housing, for people who are now homeless. According to a draft affordable-housing framework prepared for the city council, these city dollars could leverage up to five times as much in federal and state subsidies.

Barlett said he's "open to" the goal of 100 percent affordable housing at Ashby BART, a goal that's also been endorsed by Mayor Jesse Arreguin. Igor Tregub, immediate past chair of the Berkeley Housing Commission and member of the rent board, said achieving that goal would be challenging, but pointed to the recent success in creating a new 100 percent affordable housing development on Berkeley Way between Shattuck and Milvia, in a space that's now a parking lot. That development is designed to be affordable to people making below 30 percent of the "area median income" — for example, a little less than $30,000 for a two-person household. Rebecca Saltzman, who represents North Berkeley on the BART board, noted that another 100-percent-affordable development was just completed near the San Leandro BART station.