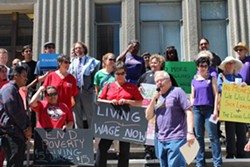 Tomorrow at 11:30 a.m., the Berkeley City Council will convene a special meeting to try one more time to reach a compromise on the minimum wage.

All sides sound optimistic. But it's been a long, hard road.
[jump]
For over two years, a coalition of workers, labor unions, and other activists have been pressing the city's leaders to increase the minimum wage. But business owners and moderate members of the council have been resisting a substantial increase.

The inadequacy of Berkeley's existing minimum wage has been conceded by virtually everyone. At $11 an hour, a full time employee who takes no vacation can only make about $22,000 in annual income, before taxes. Berkeley's average rent for a one bedroom apartment is now $31,000 a year. Rents in nearby cities aren't much better. Many low-wage workers are barely surviving as the region's cost of living continues to rise.

In April, the Berkeley for Working Families coalition qualified a ballot initiative to raise the minimum wage to $15 an hour by October 2017 and then to increase this by 3 percent each year, plus inflation, to reach the city's official living wage. Backers of the measure include State Senator Tony Thurmond, Berkeley councilmembers Kriss Worthington, Jesse Arreguin, and Max Anderson, and the Alameda Labor Council.

But opponents of this measure, including the Berkeley Chamber of Commerce, Mayor Tom Bates, Councilmember Laurie Capitelli, and some nonprofits, crafted an alternative that would raise the minimum wage at a slower pace, and not reach the living wage. The alternative would increase the living wage to $15 by October 2019. In April, a majority of the Berkeley City Council voted to put this alternative measure on the November ballot alongside the Berkeley for Working Families initiative.

Labor activists with the Berkeley for Working Families coalition have called the alternative measure a cynical attempt to confuse voters and sabotage their minimum wage initiative.

Since then, both sides have met several times to negotiate a possible compromise that would avoid expensive campaigns for and against both ballot measures. Until recently, it was unclear whether the two sides could reach common ground.

On August 11 they almost struck a deal. Capitelli called a special meeting of the Berkeley City Council to consider voting on an ordinance that would have increased the minimum wage to $15 by October 2018. But only councilmembers Kriss Worthington, Darryl Moore, and Jesse Arreguin showed up to the meeting, and it was cancelled for lack of quorum.

"Capitelli got a lot of heat for his screwup last time," said Worthington. "It was rude to not show up."

Worthington said the compromise is not a new idea, and that it has been discussed for several months.

Capitelli told the Express the August 11 meeting was premature, and the compromise measure hadn't been properly vetted. "Really we just ran out of time and I hadn’t had opportunity to release the document, so it didn’t seem fair to me, to all parties that we go forward."

Both Worthington and Capitelli said tomorrow's special meeting will happen, and they both expect the compromise to win approval.

"The good news is that workers will be assured they don’t have to worry about whether both ballot measures will win or lose, or whether the weaker one will get more votes and trump the stronger one," said Worthington.

But even if the compromise is approved tomorrow, Berkeley voters will likely still have two minimum wage measures on their ballots. What then?

Capitelli said the city council and the Berkeley for Working Families Coalition are in talks to go to court and ask a judge to possibly remove the ballot measures. But if that doesn't work, it puts both sides in the awkward position of campaigning against their own ballot measures.

Worthington doesn't think that's too big a problem. "If we pass the compromise, I think both sides will send a loud and clear message to tell everyone to vote no."