"Being a wonder woman is surviving in a male dominant society." 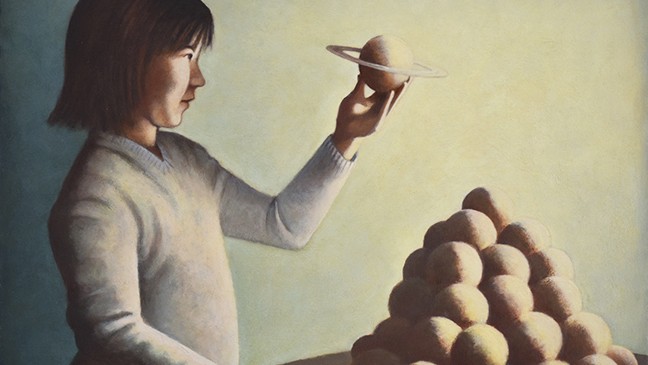 Highly regarded women artists no longer must be like Hildegard von Bingen, the 11th-century nun who operated under the dominion of a male god. Nor are women subjugated to play unacknowledged helpers to male artists, which was common a mere 100 years ago. Even so, the work of professional women in the arts is often overlooked, undervalued, or outright ignored in exhibits, performances, museums, libraries, and the marketplace.

In response to such inequities, one could flail their hands, pay lip service, or give up in frustration. Or, a dozen people could band together to present the fine artwork of 10 Bay Area women whose painting, sculpture, drawing, photography, and printmaking spans decades.

If there is a through line to the exhibit's wide range of mediums, styles, and thematic content — other than gender — it is the works' invitation for active participation. The artists deliberately leave loose ends, as if to suggest that a viewer complete the visual storytelling. Instead of displaying false power by over-controlling the narrative, the art offers provocative, complex subjects in tight or unusual compositions. A person's history, reality, biases, interests, and other concerns are as much a part of taking in the art as eyesight. That raises the question: Will men and women view it differently?

Already, response to Krevsky's role as curator provides a clue. "I'm getting pushback from the art community on what I say, who I'll bring in as moderators," he said. "I'm asked, 'Why's a man doing this? Why aren't there more women on the panels?' My answer? This is art through one male person's eyes."

Don't be fooled — Krevsky is correcting what he perceives as an oversight. "I simply felt these are fabulous women artists making statements for years that the art world did not give the recognition they deserve," he said. "I've been lucky as an art dealer/curator to have great teachers, many of them women, who taught me about viewing art. Politically, we've become divided on gender issues. Whether men look at art differently or men artists paint differently is secondary."

Even though Berkeley-based artist Jan Wurm believes separating male and female artists risks exacerbating inequities in the art world, she still chose to participate for the opportunity to discuss the topic of women artists. "I don't see this exhibit as setting up a parallel system: It's one event in time, not a matter of joining or creating a women's collective like in the '60s," she said. "Of course, it's still important to be viewed as an artist without gender classification."

Wurm's vibrant paintings are independent of narrow, only-of-the-moment time frames. While "Trance," "Trick," and "Trust" were completed in 2007, they bristle with relevancy at a time when women are speaking out against abuse at the hands of powerful men. They feature male-female relationships that are masked — both literally, in scenes drawn from magic acts and circuses, and figuratively, with men positioned as dominant to women. "I've been involved with men and women and power for a long time," she said. "It's about smoke and mirrors, deceit, skills — like the knife thrower where danger is masked but the thrower can actually see through the black fabric. It appears beyond belief when it's not. It's a sham — it's us wanting to believe in magic power. That's in relationships, too."

Dana DeKalb was born and raised in Indonesia until age 15. It could be said her art is "outsider art," except that the imagery embeds itself in classic, good-versus-evil narratives. The first art-related images she took to heart were Renaissance paintings depicting the lives of the saints — and comic books. Both feature protagonists and tell partial stories, as do the museum dioramas of ancient cultures she admires that blend science, mythology, archeology, art, culture, and history.

DeKalb's paintings allow viewers the same satisfaction of imagining various stories that she felt during childhood trips to museums and art galleries. In "Harmony," which depicts a little girl playing with toy balls, the girl could also be interpreted as a young god or mythical creature creating planets. "Catch and Release," DeKalb said, could be seen as a man trying to trap a flock of birds in an impossibly small birdhouse or a metaphor for seeking order in a chaotic world.

DeKalb wishes gender was not a factor when evaluating art. "Since we don't live in anything like a perfect world, the voices of women in the arts are largely drowned out and we have some serious catching up to do," she said. "For now, at least, the best thing women — and sympathetic men — can do is continue to support each other and celebrate our strengths."

Stacey Carter's multimedia prints, "3 Mile Island," "Obama," and "Surfers," document history through time-honored photography, printmaking, and painting techniques. For "Surfer," she found the original photo at a flea market. She treated the image, printed it, and transformed it with 30 to 40 layers of color. "It evokes a mood that vacillates between old and new," she said. 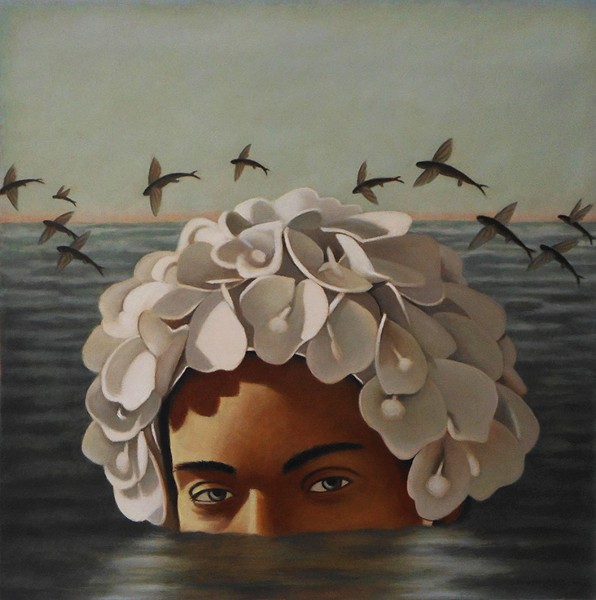 Memory plays a role in these pieces. She remembers the 1979 explosion at 3 Mile Island, for example. "The past informs the future," Carter said. "The nuclear stuff — didn't we decide a long time ago that's not the way to go? Now it's coming up again. We have to be aware."


Awareness comes with reminders and repeated exposure. If it's true that the past informs the future, then the end result of Wonder Women will be a balanced playing field for women artists. "Our time has come. Enough already," Carter said. "Being a wonder woman is surviving in a male dominant society. When people meet me, thinking my work is 'guy art,' they're surprised. I wonder, would I sell more work with a male stand-in? I might try it sometime to see what happens."