Berkeley and the Road Not Taken

In contrast with its 2010 attitude toward transit improvements on Telegraph Avenue, the city now seems to see bike and bus lanes as the future of a denser San Pablo Avenue. 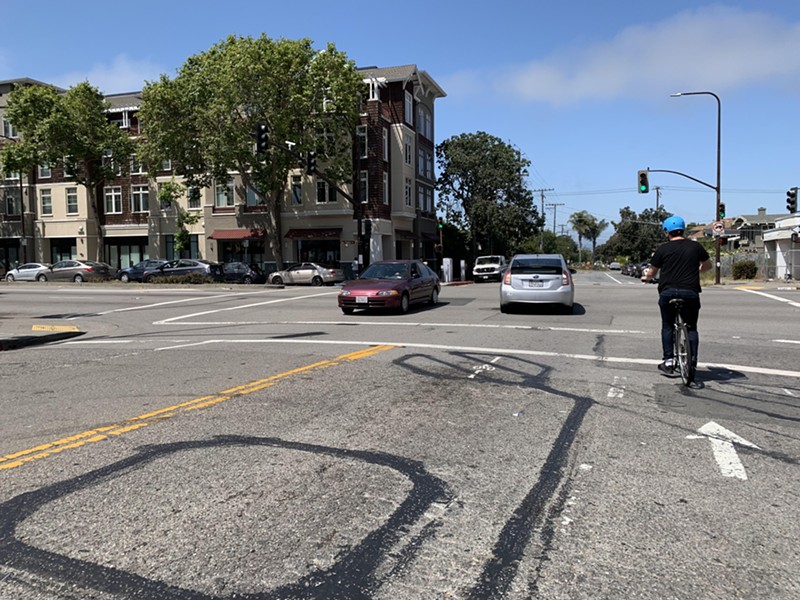 Although her daily bicycle commute to Oakland typically avoids San Pablo Avenue, Berkeley resident Ali Von Klan has had her fair share of near misses on the convenient-but-dangerous corridor. One day, as she approached the intersection of San Pablo and Ashby Avenue, she narrowly avoided a galling threat. "I looked to my left and saw a driver not looking at her mirrors, but looking at her phone on the dashboard, watching a television show," she said. "I feel that the corridor is designed for people driving, not people on foot or on bikes. I go out of my way to avoid it."

Even as a pedestrian, Von Klan feels unsafe crossing San Pablo, as right-turning drivers frequently disregard pedestrians at crosswalks. Fortunately, there's a plan to fix that.

The San Pablo Avenue Corridor Project is still in its initial planning phases, and much fanfare has been made over the potential to speed up transit with bus-only lanes stretching from downtown Oakland all the way to Richmond's Hilltop Mall. But separated bike lanes also are under consideration, along with multiple traffic-calming measures to make San Pablo safer for walking and cycling.

"Whatever the safest way is to get bicyclists through the corridor is what I'll support," said Berkeley Mayor Jesse Arreguín, who also indicated that the city's own future planning efforts would likely include proposals for protected bike lanes around the area.

Berkeley seems poised to fully support bus-only lanes through San Pablo Avenue, and bike lanes may prove just as popular. It's a major political shift from just a decade ago, when a city council majority — including then-councilmember Arreguín — rejected a proposal for a Bus Rapid Transit project along Telegraph Avenue in 2010. Comments from newly elected councilmember Rigel Robinson, whose district encompasses the Telegraph corridor, show just how much opinions appear to have changed.

"Dedicated bus and bike lanes are the right choice for the planet, for the housing crisis, and for our small businesses," Robinson said. "The East Bay missed a major opportunity to enhance the Telegraph transit corridor several years ago — I hope we do not make the same mistakes as we plan for the future of San Pablo."

With studies showing just a 60 percent parking occupancy rate at peak hours along San Pablo, bike advocates will have significant momentum to push for protected bike lanes along the whole corridor. Karen Parolek, a member of the street safety advocacy group Walk Bike Berkeley, cited the safety and traffic challenges of routing bike traffic away from the San Pablo corridor.

"Women riders have commented that riding on the Ohlone Greenway after dark isn't really viable, and that's been my experience as well," Parolek said. "But pedestrian safety is our priority, and I think there are some designs we haven't seen yet that can address both."

The joint project between Alameda and Contra Costa Counties is primarily intended to increase bus transit reliability by reducing car traffic congestion as regional population grows. Simultaneously making the corridor safer for biking and walking would encourage car-free trips for more travelers, in turn making the street even safer.

San Pablo Avenue is a major arterial through Berkeley, but one of the most dangerous and stressful corridors for cyclists. So even under current traffic patterns, there's more to be gained from making San Pablo safer for a variety of transit types. According to data from Berkeley's 2017 Bicycle Plan, a full 8.5 percent of commuters in Berkeley ride their bikes to work — the second-highest such percentage in the country, and double the rate of Oakland. The Alameda County Transportation Commission estimates that roughly half of the current 13,900 daily automobile trips along the corridor could switch to transit, 39 percent could switch to cycling trips, and 4 percent could switch to walking.

"As the data shows, most trips on this street are short trips," said Dave Campbell, Advocacy Director for Bike East Bay. "San Pablo has the destinations — off on the side streets, that's where people live. We know we can design San Pablo Avenue for everyone, and the task for this project is to see how to make it work."

The City of Berkeley conducted public surveys and found that all of its major arterials have very high ratings for "Level of Traffic Stress," making streets like University and San Pablo Avenues daunting to all but the most fearless athletic cyclists. According to a report by the Alameda County Transportation Commission, conditions on San Pablo go from the lowest traffic stress rating, a 1 along the northbound bike lane between 16th and 19th Streets in Downtown Oakland, up to the highest rating of 4 north of 20th Street. By 36th Street, average car speeds exceed 30 miles per hour, but the traffic stress level for cyclists remains consistently high.

Bike East Bay's Dave Campbell cautioned that some "mixing zones" at intersections in currently proposed designs, where the protected bike lanes abruptly end to permit a right-hand turn lane for cars, could pose dangers for pedestrians and cyclists. "That might be nice for local access, but it's not crucial," he said. One potential solution, Campbell said, would be a "scramble" crossing for cyclists and pedestrians, in which auto traffic stops in all directions at once to allow for diagonal crossings.

"We should not be maximizing automobile convenience on the corridor for people who don't have a destination on the corridor," said Matthew Lewis, a member of Berkeley's Transportation Commission. According to the surveys by the county's transportation commission, one-third of trips along the corridor begin and end on neighboring side streets.

"But as San Pablo fills in with more people, we need to be making it safer for people with destinations on the corridor," Lewis added. "The cities need to be thinking about what's best for the local business base, and for the local residents living there — that means maximum bike facilities, minimum opportunities for cars to mix with pedestrians and cyclists."

Elsewhere along the San Pablo corridor, other cities are fully embracing the safety and traffic relief benefits of protected bike lanes. Notably, the city of Emeryville recently approved a two-way protected bike lane along 40th Street.

"In the case of 40th Street, we determined that physically separated two-way cycle track on the north side is the safest way to ensure that cyclists can commute through our community with fewest conflicts with cars," said Emeryville City Councilmember John Bauters. "We strongly support physically protected bike lanes through main arterials."