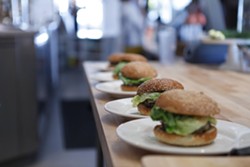 What the Fork recently speculated that Belcampo Meat Co., the sustainability-focused meat company, was gearing up to open a new restaurant in a 5,000 square-foot warehouse in Oakland’s Jack London district, at 369 3rd Street. In an email, Anya Fernald, founder and CEO of the Oakland-based company, confirmed those plans and offered a general outline of what customers can expect.

First off, unlike some of the other Belcampo restaurants around California, the Oakland location won’t feature a full-service butcher shop. It will, however, have refrigerated display cases stocked with selected meat products — things such as stock, packaged ground beef, chickens, and so forth. Fernald said she might add a full-service butcher counter later on if it seems like there’s demand for it in the neighborhood.

Mostly, though, the Oakland shop will be a restaurant, with a menu focused on steaks, burgers, and meaty salads. Belcampo’s “Fastburger” — a smaller, less expensive version of the company’s well-regarded signature cheeseburger — will be available during both lunch and dinner for $6–$8. There will also be a full bar, with most cocktails priced under $10.

It will be a busy couple of months, then, for Belcampo, which also just announced a new burger shop opening at The Yard, the open-air food court located across from AT&T Park in San Francisco. No word yet on an estimated opening date for the Oakland restaurant, but Fernald said that more detailed plans will likely be finalized by June, which means the restaurant probably won’t open its doors until sometime after that.