The Green Door’s Lounge8Four7 on Howard Street in San Francisco has regularly drawn hundreds of patrons each day with its walls of flatscreen TVs, plush stools, broad tables, billiards, vaporizers, and snack machines. A home to many cannabis community events and meet-ups, it’s among the Bay Area’s best spots.

That lounge is now medication-free, The Green Door reports in an email yesterday.

“We are sorry to announce that Lounge8four7 is temporarily closed to medicating. We are undergoing a new permitting process and plan to re-open the Lounge for medicating in the very near future. For the time being the Lounge will remain open if you just need a place to relax. We sincerely apologize for this inconvenience.” 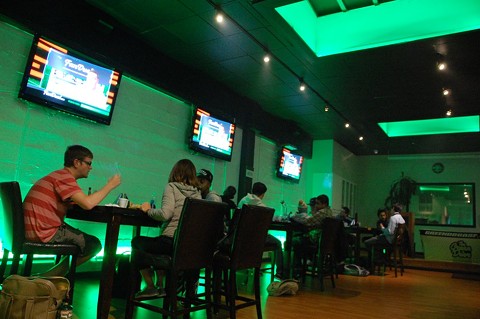 The Lounge’s closure fits in with the Bay Area — and the country’s — struggle over where exactly folks can use cannabis.

The birthplace of the medical marijuana movement — the Bay Area — has long-cherished the right to assemble. Dennis Peron's Castro Castle pioneered the concept of a place where patients could get cannabis and enjoy it with others.

But the advent of city-level medical marijuana regulations, as well as state-level legalization, has left out this right.

You can face discrimination for lawfully medicating in your apartment or condo. Smoking in public places, such as parks or sidewalks, remains prohibited. Health officials have deemed that all bars and other private businesses are "public" places as well. Legalization, it appears, is only for childless homeowners.

Such bans create a perverse incentive to accidentally overdose on edibles alone at home or in your hotel room, rather than risk an illegal joint in public, Brookings' John Hudak found.

Berkeley Patients Group ran one of the East Bay's best vapor lounges until it was closed by federal agents several years ago. The City of Oakland continues to ban “onsite consumption” at its eight dispensaries. In San Francisco, a few places allow patients to medicate with vaporizers, including SPARC and the Bloom Room.

In Seattle, the city attorney is calling for tweaks to adult use legalization to allow for vapor lounges.

And in Denver, activists are running an initiative campaign to restore cannabis users’ fundamental right to assemble.