On Sunday afternoon, during Día de los Muertos, the Impact Hub event space in Uptown Oakland was packed to the brim with social justice activists and Slow Food types who had gathered to celebrate Decolonize Your Diet, a new Mexican-American cookbook by two Oakland-based professors. Organized by the Oakland Food Policy Council, the event had a vibe more akin to a religious revival meeting, or perhaps a call to revolution, than your typical prim-and-proper book launch.

Calpulli Coatlicue, an Aztec spiritual dance group, started the meeting with a prayer in the form of thumping drums. Food activist Bryant Terry quoted the opening lines of “Beef,” hip-hop legend KRS-One’s anthem against industrial meat. And Gustavo Arellano, the Orange County-based Mexican food expert, argued that the only truly “authentic,” precolonial Mexican cuisine was the mostly plant-based fare that is the subject of Decolonize Your Diet.

For authors and life partners Luz Calvo and Catriona Esquibel, the cookbook is the culmination of years of research and conversation. The genesis of the project was Calvo’s breast cancer diagnosis and subsequent recovery in 2006, which led the couple to reexamine their relationship to food — and how their diet, and their people’s collective health, had been impacted by Mexico’s five-hundred-year legacy of colonization, from the arrival of the Spanish to the devastating effects that the so-called Standard American Diet has had on Mexican Americans in the United States. They concluded that the healthiest way to eat would be to go back to the traditional foods of their Mesoamerican ancestors, eschewing white flour, refined sugar, and the deep-fried, cheese-laden fare that many Americans associate with Mexican cuisine.

So, they started a small urban farm at their home in the Fruitvale district and began preparing traditional recipes using corn, squash, beans, and wild herbs. The project eventually grew into a course (“Decolonize Your Diet: Food Justice in Communities of Color”) that Calvo teaches at Cal State East Bay, a Facebook group with more than 14,000 followers, and, now, a cookbook. 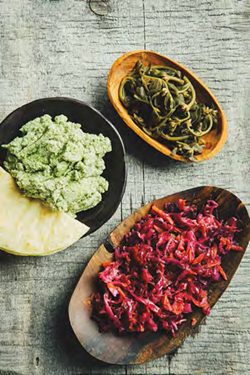 In an interview, Esquibel said that although the book keeps a tight focus on ancestral Mesoamerican cuisine, she and Calvo see themselves as part of a broader conversation — one that includes Terry’s efforts to reclaim the healthy, vegetable-centric roots of soul food, for instance. And while Decolonize Your Diet only contains plant-based recipes (because Calvo and Esquibel are both vegetarians), the authors acknowledged that for some people, eating a certain amount of meat might be an essential part of their cultural heritage. They acknowledged, too, that there might be positive outcomes from different food cultures coming into contact with each other. “It’s not like we’re trying to stop things in time and go back to some mythical past,” Calvo said.

But she added that it’s good to approach such changes with a critical lens: Was a new ingredient imposed on a culture, or was it chosen freely? Was it an ingredient that brought health or one that brought sickness and death?

Perhaps the biggest fear with a cookbook that urges readers to return to a simpler, more wholesome way of eating is that the food won’t be very good — that, in this case specifically, what you’d end up with is a bland cuisine made up mostly of nuts and seeds. I can’t speak for the entirety of Decolonize Your Diet, but I did try a few bites of the sample dishes that were on offer at the book launch and had been prepared, based on Calvo’s recipes, by People’s Kitchen — a nonprofit, community-oriented, traveling restaurant of sorts based in Oakland. There was a light, tangy cashew-based crema. There was a red salsa I couldn’t stop eating — smoky, brightly acidic, and complex in its layers of flavors in a way that reminded me of a good mole.

Most interesting of all, there was a kind of pumpkin-seed dip known as requesón de semilla de calabaza — a nutty, lime-green mixture with the texture of ricotta cheese. The recipe was of particular significance to Calvo and Esquibel because they’d found it, in an obscure Mexican archaeological journal, right before the cookbook was to be published — and because the dish hails from the Sonoran region of Northern Mexico, where both authors have familial roots.

“When I put it on a warm corn tortilla to test it, it almost brought tears to our eyes,” Calvo said. “It felt like the ancestors were with us as we completed the cookbook.”