Take a look at MTV's programming these days and you'll see that the "music" component of the MTV acronym has become less and less relevant. Shows like Jersey Shore and The Hills have taken over the spots where music videos and TRL once dwelt. Likewise, MTV's infamous "VJs," or "Video Jockeys," have now been usurped by "TJs," or "Twitter Jockeys." The Viacom-owned station is currently conducting a nationwide search for the most social-network-savvy individual to win $100,000 and a position as the channel's official Tweeter. Of eighteen contestants, two are from the Bay Area (two more are yet to be selected). Pegah Rashti and Ryan Carlos are both from the South Bay, are 21, and Tweet as if their lives depended on it. Our interviews with Pegah and Ryan after the jump.

Ear Bud: How did you become a Twitter jockey finalist?
I don’t know exactly how they found me — they didn’t tell me how. I had applied to MTV a long time ago. I think they went through their pool of applicants. They said they were spying on me for a few weeks — they found me and really liked me.

Why do you think they chose you?
Well basically I majored in public relations so I am a Twitter junkie, I’m always on social media. Started a blog called These Moments. I’m active in these kinds of things.
I’m definitely myself and you can see that through my Tweets. That’s what I’m hoping they saw and I do love pop culture, I love everything entertainment. I also love nonprofits — I show that through my tweets and blogs. I love that celebrity star life but I also love to give back.

What are you doing now?
I just graduated. I’ve had interviews. I came back home because my dad lost his job. We’re kind of struggling. I’m kind of helping out with money. I got a job at a restaurant on Santana Row. I’m on internship web sites every day. Hopefully this will be it.

When did you start Tweeting?
I’ve been Tweeting for a year and a half now. My best friend made me get a Twitter account two years ago. I didn’t get it so I stopped using it. My PR professor last year —Titter was part of the class requirements. I started Tweeting all my favorite celebrities and nonprofits. I saw how useful it is, and how informative it is.

How has it been useful?
One example, I was in a Maroon 5 music video just from hearing about it on Twitter. I don’t watch TV that much. We don’t have cable either at my house. So I don’t get to watch. I get everything from online, from Twitter. … What else I really like about it, I can see what people are saying. The things that I’m talking about, you can see what other people are talking about.

How often do you Tweet?
I Tweet all day long. I actually just got my new phone, it has Internet on it, so I’ll probably be Tweeting more. Before I was Tweeting on my laptop; I take it everywhere. I just got a Verizon Droid.

What makes a good Tweet?
A good Tweet is something that’s catchy: not too long but gets your attention right away. Something a lot of people can relate to, like some new gossip, adding a link in there. That’s really useful I think.

What would you Tweet about if you were to become MTV’s TJ?
The way it would work is of course I’m going to be communicating with the MTV audience — MTV is music, entertainment, celebrities. I’d have to keep updated on all of that, and get feedback on the audience on what they think. I’d also put in other things I’m interested in — daily life, news. I want to be a role model for everyone else. I want to be a girl that other kids can relate to and someone they can trust. I’ve done a lot and I’ve experienced a lot and I want people to know that they can relate to me.

What kind of music do you listen to?
I like everything — I like rap music and hip-hop and R&B, and I love soft rock as well, or alternative. I’ll drive home at night and listen to soft rock.

Does MTV play music anymore?
Not as much as they used to — that was one of the things that I would love to bring back because I love music videos. They don’t show that much of it. They’re into new shows now, like regular people and bring them into the spotlight.

What makes you stand out from the competition?
I think that something that I noticed about myself compared to others is that I’m very humble — I’m not trying to be something I’m not. I do love celebrities and music. But I’m always very aware of what’s going on in the world. I went to New Orleans to repair homes destroyed in Hurricane Katrina. I’m very well-rounded. I think I could open people’s eyes to different things.

Regarding privacy, do you think there should be limits on what you Tweet about? Or is it all open game?
No, I don’t think it’s all open game. I think that something that bothers me when I found Twitter is when people bash on their jobs, like talking bad about their jobs or co-workers. I want to tell them, don’t you know they could be watching this? Also I’ve seen people that use it just for fun. … I see Twitter as being a very interactive, informative, engaging tool. I think some people do go too far with it — they cross the line. I remember reading Perez Hilton and Lindsay Lohan fighting on Twitter. They were posting horrible pictures of each other.

Facebook vs. Twitter. Thoughts?
I use Facebook. I love Facebook because it’s more personal, more just talking to my friends and family. I can talk to people I haven’t seen since kindergarten. But I think Twitter is more public, more something I can use to communicate with my favorite rock band, favorite store, but it’s not personal. I think they’re both very helpful.

How are you preparing for the Twitter challenges?
We don’t know what the challenges are going to be — it could be interviewing a celebrity or a band. We’re gonna just try to complete the challenges the best we can — be creative and stand out. That’s how we’re being judged. … I have a lot of people supporting me and a lot of networks. I can find things easily. It’s also gonna be tough. Gonna be a challenge. I love a challenge. 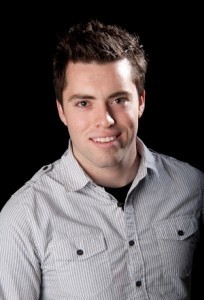 How did you become a Twitter jockey finalist?
They went through the Internet and they were scouting for people, looking for interesting personalities. They came into contact with me and asked me. Of course I said yes because it’s such an amazing opportunity. They’re looking for someone with a fun spontaneous personality who is into pop culture. I’m really happy that they thought that was me.

When did you start Tweeting?
A little over a year now. My friend got me into it. At first I didn’t really get it. I don’t really want people to know what I’m doing all the time. [But then I found out] it’s a lot more — it’s information sharing. If you find something interesting, you can share it with your friends and followers.

Why do you want the gig?
I’ve been majoring in radio, film, and television and this is something that I’ve always been interested in. I’ve always loved pop culture. This opportunity would open so many doors for me, it would completely change my life. It would be an amazing opportunity.

What kind of music do you listen to?
I love music. My music taste is actually really diverse. My favorite is definitely Lady Gaga. I think what she’s doing is really interesting, very new and fresh. … What’s gonna shape the music industry in the future is individuality.

Anyone else?
Hmm …. Miley Cyrus, Eminem, Drake. My taste is so diverse. I listen to anything from heavy metal to classic instruments. I think my taste is just evolved and she [Lady Gaga]’s the one I’m interested in the moment.

What makes a good Tweeter?
Anybody who can put themselves out there regardless of what you say or what you write. It takes a lot to put yourself on the Internet and express yourself. That’s the whole point of Twitter is to share information.

What would you be doing as MTV’s TJ?
Well, MTV would be sending me to different events. The first one is the Video Music Awards. I would updating with pictures in live real-time what was going on. I would also be giving a voice to the MTV audience as well. It would be very interactive.

Is music still part of MTV?
I’ve been watching MTV since back in the day when they had Daria and TRL. I think their network has definitely evolved. The format has definitely changed from when it first started. You can still find [music videos]. It’s also expanded beyond music.
There’s always room for more music. I’d love them to bring back TRL because that was one of my favorite shows growing up. But I love The Hills and Jersey Shore.

The contestants will face a series of Twitter challenges in July. Once the competition has been narrowed down to five contestants, they'll be flown to New York for more challenges. The winner will be announced live on August 8.