NASA Goddard Photo and Video The Eyjafjallajokull volcano in Iceland, as captured by NASA's Aqua satellite on April 17, 2010.

Spring touring schedules have been massively interrupted by the exploding volcano in Iceland, whose ash has resulted in canceled flights over Europe since April 16. As reported by Pitchfork, a bunch of European bands didn’t make it Coachella, including Bernard Sumner’s Bad Lieutenant and Gary Numan, who also had to cancel their San Francisco dates. Delphic also had to cancel its Popscene appearance. Other affected artists include Shrinebuilder, LCD Soundsystem, Crystal Castles, Los Campesinos!, Nas, Damian Marley, and Sharon Jones and the Dap-Kings, who were caught snoozing at an airport in Germany by the Washington Post. 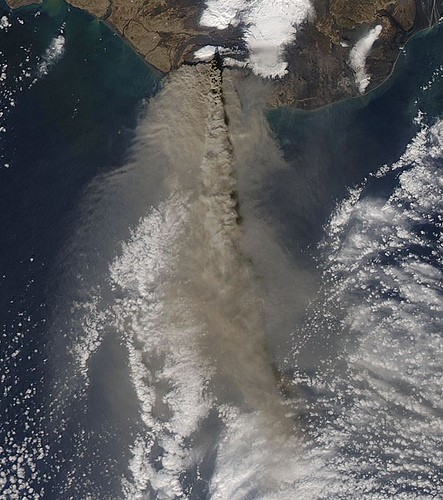