Greek food has a bit of an image problem in the Bay Area. Most diners only think of it — if they think of at all — as an inexpensive fast-food option, a quick gyro wrap served out of a hole in the wall. But chef Nick Eftimiou is banking on the fact that the cuisine is poised to really catch on: After a series of permitting delays that put off the launch for well over a year, Eftimiou’s new upscale Greek restaurant, Pathos Restaurant and Bar (2430 Shattuck Ave., Berkeley), opens tonight. The 55-seat restaurant features an extensive selection of imported Greek wines, a full bar, and a commitment to organic ingredient sourcing. 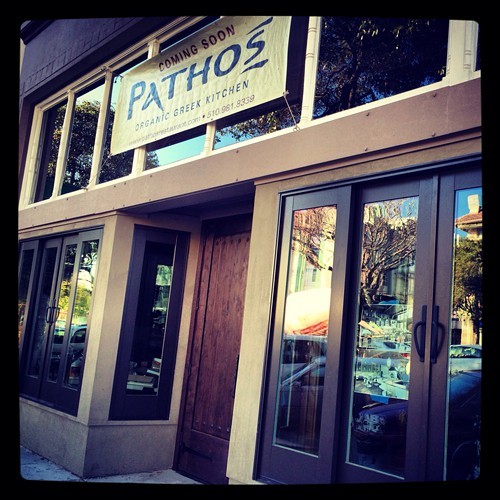 He cited the recent success of Troy Greek Cuisine (another new Greek restaurant in Berkeley) and the emergence of higher-end restaurants like Kokkari Estiatorio (in San Francisco) and Dio Deka (in Los Gatos), both of which have incorporated French and modern Californian cooking techniques to the cuisine while preserving its authentic flavors.

Until now, the Greek restaurants in the East Bay generally haven’t taken that upscale approach, and Eftimiou stressed that he isn’t exactly trying to emulate those restaurants’ styles either. While he studied high-end French cuisine in culinary school and did a brief stage at the aforementioned Dio Deka (a former Michelin star recipient), Eftimiou said his real food education came during summers spent visiting family in Greece — in the southern islands of Cephalonia and Kassos, as well as in Macedonia to the north.

So, simplicity will be the name of the game at Pathos — a combination of traditional Greek roasting and braising techniques and high-quality California ingredients. Eftimiou said he's in the process of applying for Pathos to become a certified-organic restaurant, but even without that official certification he said he's committed to sourcing only organic produce and sustainably raised meat and seafood.

“Greeks are not flashy in nature,” Eftimiou said. “We don’t have any molecular gastronomy going on over here; we don’t have any liquid nitrogen, none of that staff. Just really high-quality proteins cooked very simply.” 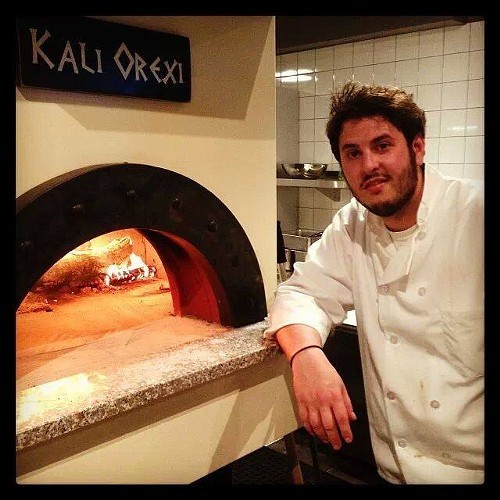 Appetizers form the largest section of the menu, with a focus on traditional items such as keftedes (lamb meatballs), grilled octopus, dolmades (stuffed grape leaves), and baked “horse beans” (“like big lima beans,” Eftimiou explained). The idea is for diners to order several order several of these to share, family-style.

Meanwhile, many of the entrées will be cooked in the kitchen’s enormous wood-fired oven — a roasted half-chicken and a wood-fire grilled whole Mediterranean seabass (aka branzino), for instance. Desserts, too, will be very traditional: There will be baklava, of course, and the fried dough balls known as loukoumades, whose vendors have had the longest lines at every Greek food festival I’ve ever attended. Eftimiou expects the honey-soaked treats to be so popular he's installed a dedicated fryer for them.

Despite the elegant-looking dining room and the expense of sourcing organic ingredients, Eftimiou said he plans to keep the menu moderately priced. He estimated that a typical dinner will cost about $32 a person, which is still quite a bit less expensive than the Bay Area’s most upscale Greek restaurants — “pocket-friendly” enough, Eftimiou hopes, to attract regular customers who might come two or three times a month.

To start out, Pathos will be open for dinner from 5:30-10 p.m., Tuesday to Sunday. In a few weeks the restaurant will roll out lunch service and, eventually, weekend brunch.