At Caleborate's Noise Pop Show, Love for Family and Berkeley

Repping his own swag, Caleborate waltzed out onto the Cornerstone stage last night like it was home. And, in a sense, it was. The Sacramento-born hip-hop artist spent most of his adult life in Berkeley. It’s where he launched his music career. “It shaped me into the individual I am today,” he said with gratitude.


It felt like a fitting place for the rising talent to headline his first Noise Pop show, and fans — including a remarkably large contingent from Modesto — came out in droves. His set dug into his archive while emphasizing his new record, Real Person, which dropped last year. Real Person is Caleborate at his most vulnerable — his divorced parents, career struggles, and Donald Trump-inflected woes are all on display.


Still, the night was definitely a party. He bounced across the stage to his signature, ’90s-influenced soundscapes with triumphant glee. “Soul,” in particular, brought unmatched energy. 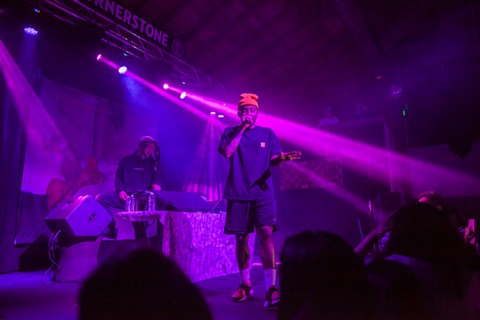 About half-way through, the rapper gave a shout-out to all his family members in the room — his mom, cousin, aunt, uncle, sister — before bringing out his brother, R&B singer Cash Campain, for a short interlude. It was a sweet, generous moment, given Cash already performed a set earlier in the evening, with Cash singing his latest single “Holy Matrimony” and Caleborate contributing a clever verse. But Caleborate’s set was full of similarly sweet, appreciative moments. After leading the crowd in a sing-along to “4 Willem,” perhaps the most personal, somber, and gripping track off the new album, he gazed out in awe.