At 50, Arhoolie Records Looks Back and Goes Forward 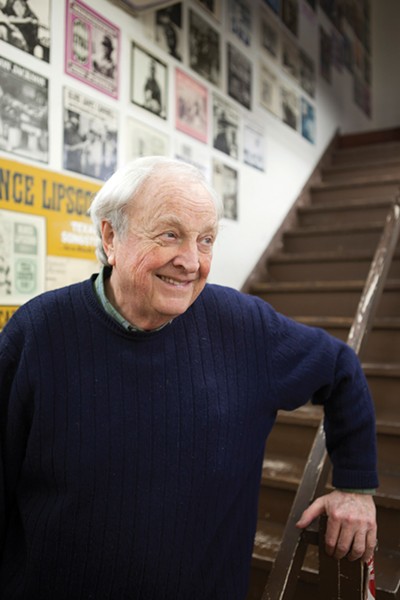 When it comes to musical treasure hunting, Chris Strachwitz is in a league of his own. While the dogged music sleuth has occasionally hit pay dirt with one of his recordings, his invaluable cultural trove can't be measured in dollars. Since the mid-1950s, the German-born producer and founder of El Cerrito-based Arhoolie Records has devoted his life to documenting, preserving, and nurturing a dazzling array of roots styles, including country blues, gospel, bluegrass, jazz, zydeco, Cajun and Tex-Mex music. He managed to make an indelible mark on the Bay Area music scene without ever veering into pop. Not to mention that in an era of record store closures and bloodletting in the music industry, Strachwitz has phenomenal staying power. His label is now fifty years old.

Never much interested in music produced for popular consumption, Strachwitz is a connoisseur of soul in its many manifestations. The sounds he's captured or uncovered have influenced generations of musicians, from Bob Dylan, Taj Mahal, and Bonnie Raitt to Ry Cooder and the Rolling Stones (whom Strachwitz famously and successfully pursued over royalties due ailing bluesman Fred McDowell for the version of "You Gotta Move" on "Sticky Fingers").

"I didn't care for the slick R&B," 79-year-old Strachwitz said, defining his particular vision of authenticity. "I liked the raggedy stuff, the stuff where the musicians are obviously expressing themselves. I like honking bands, the beat, the powerful rhythm, and I don't care if it's hillbilly or gospel.

"Meeting all these different cultures blew me away," he continued. "They were all so different. They all had their own thing, their totally unique music that was constantly changing. Records are such neat snapshots, a time and a place they'll never be again."

The celebration concludes on Sunday with Taj Mahal, Los Cenzontles, Suzy & Eric Thompson, Savoy Family Band, sacred steel guitar masters The Campbell Brothers Band, and Country Joe McDonald (whose 1965 deal with Strachwitz granting him half of the publishing rights for "I-Feel-Like-I'm-Fixin'-to-Die Rag" turned into a windfall when the hit album Woodstock included Country Joe and the Fish's rousing rendition of the tune). The event's proceeds benefit the Arhoolie Foundation, a not-for-profit educational organization dedicated to the documenting, preserving, and disseminating of "traditional and regional vernacular music."

"It's always a miracle when you listen to something you haven't heard for fifty years," Strachwitz said. "We were going to call it the Berkeley Box. It was a nightmare trying to contact all these musicians and the heirs. I was so into the ethnic stuff, I didn't think much about recording friends around here. I just love to make recordings. I was enamored by the whole process."Strachwitz's passion for blues, jazz, zydeco, and gospel music falls within the familiar trope of European appreciation for African-American culture. But his commitment to Mexican-American music is sui generis. He first discovered mariachi and accordion-driven Tejano music in the late-1940s, listening to Spanish-language radio stations while driving through rural Southern California. As a student at Pomona College, he frequented a bar with a conjunto, but could never convince friends to join him. Over the years he amassed a singularly exhaustive collection of Tejano music, including sessions recorded a century ago. While he released some of the music on Arhoolie, he kept on searching for rarities even when he already had thousands of sides he would never get around to anthologizing.

Music lovers from around the region often made pilgrimages to Down Home Music, Strachwitz's record store that shares the El Cerrito building with Arhoolie. Among them was guitarist Eugene Rodriguez, who went on to found Los Cenzontles Mexican Arts Center in a San Pablo storefront, which gave birth to the celebrated ensemble Los Cenzontles. In many ways, the group is an extension of Strachwitz's passion, and also resulted in the groundbreaking explorations of Tejano culture Chulas Fronteras and Del Mero Corazon, collaborations with Academy Award-winning documentarian Les Blank and editor Maureen Gosling (who's at work with Chris Simon on a documentary No Mouse Music: The Story of Chris Strachwitz and Arhoolie Records). The Arhoolie Foundation donated Strachwitz's massive Frontera Collection to UCLA, which started making them available to students and scholars last year.

"The fact that Chris Strachwitz has valued Mexican-American traditions, even more than Mexican Americans themselves, is so important — which isn't to say we won't come around and reclaim it as the years go by," Rodriguez said. "He spent so much of his life documenting and archiving, and it's such a gift to future generations." Which is not to say that Strachwitz wants to keep the tradition preserved in amber. "Arhoolie isn't just a story about the past," Rodriguez continued. "We're moving our traditions forward, and Chris has a passion for that as well."