Another Stingray Sighting in Lake Merritt!

January 02, 2015
8 comments
An Express reader has once again spotted some kind of stingray in Lake Merritt! Unfortunately, this one was not freely swimming around in the lake, a tidal lagoon where passersby have increasingly reported surprise sightings of various aquatic creatures over the last year. Today's photos come from Oakland resident Christina Flores, who spotted a dead stingray at the edge of the lake yesterday around noon. Images below!

Flores, who lives by the lake, said she and her boyfriend spotted the deceased creature at the southern tip of the lake near 14th Street and Lakeside Drive. Here are photos she sent us:

"It caught my eye, and I just kept looking at it," said Flores. "It looks just like a stingray, but why would that be there?" Though it was pretty decomposed, she said it was clear that it was some kind of ray, and after stumbling on the Express post from April (featuring photos of a swimming stingray), she was convinced.

These stingray sightings came after residents in the fall of 2013 spotted a river otter in Lake Merritt — the first seen there in decades. Measure DD — a bond measure that Oakland voters passed in 2002, aimed at improving the waterfront at Lake Merritt and the Oakland estuary — has helped fund a range of habitat improvements, including a project involving the removal of the culvert at 12th Street (which improved the water flow between the tidal lagoon and the estuary). For more on the ongoing efforts to enhance the water quality at Lake Merritt, check out our print story, "Improving Lake Merritt" (June 11, 2014).

And here are two photos of the stingray sighting last April, from reader Ashley Garver: 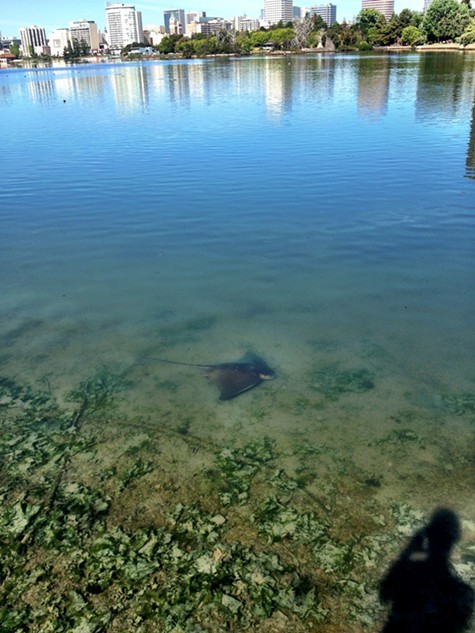