Ryanaustin Dennis invites filmmakers and audiences to wonder out loud.

Filmmaker Wes Anderson’s oeuvre possesses of one of the most identifiable aesthetics in cinema. With a great respect for color theory, the filmmaker assigns a striking palette to his works. And then there’s his penchant for symmetry and depicting familial life in extremes. Anderson has fashioned an aesthetic so distinct that it’s recognizable, and even imitable, off-screen. Of course, there’s also Quentin Tarantino, Stanley Kubrick, and David Lynch, who’ve also carved out their own movie aesthetics. But where does a Black film aesthetic come in? And, for that matter, is the Black aesthetic even monolithic?

At the beginning of the 20th century, Black actors appeared in prominent films, but were relegated to subservient stereotypes: mammy figures, incompetent butlers, harlots. While Black actors and filmmakers continue in their fight for more screen time today, Arthur Jafa is a cinematographer who’s managed to amass enough of it to make his signature aesthetic known. His work on Julie Dash’s 1991 film, Daughters of the Dust, is marked by a distinct specificity — so much so that Beyoncé’s Lemonade is a palpable homage to the film’s Southern Gothic quality and languid Gullah imagery, replete with specters and West African tradition.

Ryanaustin Dennis, curator of The Black Aesthetic Film Series, recalls watching Jafa’s works and relating to them, but also recognizing his Black aesthetic looked different. “On a deep level, I’m interested in aesthetics,” Dennis said of his curiosity.

Now in its second season, the mission of The Black Aesthetic Film Series is to, perhaps predictably, explore “What is the Black aesthetic?” But Dennis isn’t looking to walk away from this showcase with a cut-and-dry answer. The question, instead, serves as a facilitator for conversation, and a reminder that, for one, the Black aesthetic exists and, two, it contains multitudes. 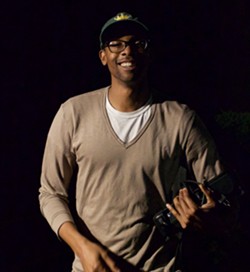 Its inaugural season kicked off in October 2016, when Dennis and his collaborator, local filmmaker Christian Johnson, became fed up with how Black women filmmakers in particular are so often left out of the larger conversation in cinema, Black or otherwise.

“I’m just over phallocentrism. I don’t buy into it,” Dennis said. “If you are a person who likes to see women in the world define themselves and be in the world, you just do the work,” he added. “How do you use whatever privilege and access you have to be a part of the right part of history? That’s what it really comes down to.”

The 2016 season of the film series boasted an eight-week roster of films, such as the aforementioned Daughters of the Dust and Drylongso by Cauleen Smith, followed by an audience discussion. The discussions weren’t muddled in esoteric film-school jargon, but rather an open forum for considering Black womanhood, and a space to form connections between the audience members and organizers.

The second season of The Black Aesthetic Film Series (which commenced on April 13 and runs through May 25) offers more of the same — provocative films and discourse. For this round, Dennis has curated a roster mostly featuring up-and-coming Black filmmakers from the Bay Area.

“I’m doing a season three, I’m doing a season four, five, six. I’m gonna do as many as I can until people tell me to stop.”  tweet this
Artist and musician Brontez Purnell opened the series with his directorial debut, 100 Boyfriends Mixtape. The semi-autobiographical, experimental film uses Purnell’s punk-rock aesthetic to share his daring perspective on life (Purnell currently fronts the band the Younger Lovers). Other filmmakers in this year’s lineup include Yetunde Olagbaju, Anaiis Cisco, and Alli Logout, whose film Lucid Noon, Sunset Blush will finish off the series.

The idea for the film series came to fruition during Dennis’ residency at E.M. Wolfman, a multi-hyphenate hub of creativity nestled in the thick of high-rises in downtown Oakland. The general interest small bookstore is hosting several of the series’ screenings, and Wolfman’s founder, Justin Carder, told the Express he’s excited to be “building the infrastructure around [the series] to make something lasting.” In fact, Johnson is currently in residency at Wolfman, where he’s working on a short film — a psychological thriller about an interracial couple in Oakland titled A Moment of Truth and Sin.

With this burgeoning partnership, and new projects like Johnson’s on the horizon, there will be no shortage of iterations to add to the ever-growing lexicon of Black aesthetics — and Dennis is eager to showcase them.
“I’m doing a season three, I’m doing a season four, five, six. I’m gonna do as many as I can until people tell me to stop.” 