In her series Spaces from Yesterday, the Oakland artist constructs immersive installations of inmates' fondest places from childhood.

When Oakland artist Amy Ho asked San Quentin Prison inmate Bruce Fowler to recall his favorite place as a kid, he described an old Cadillac with black leather seats. Fowler grew up in Los Angeles but always became motion-sick in the car. So, on long drives, he would lay down on the plush carpet covering the floor of the spacious backseat and soak in the new-car-smell as the world whipped past.

That experience is one of five memories belonging to San Quentin inmates that Ho will recreate as immersive installations for her series Spaces from Yesterday. The first, created with help from Bobby Dean Evans Jr., will be shown at Chandra Cerrito Contemporary from August 5 through September 29.

For years, Ho's art installations have investigated perception of space. Interested in what spatial awareness reveals about the connection between mind and body, Ho often attempts to trick her viewers into thinking space exists where it doesn't — usually by building miniature rooms out of card stock, lighting and photographing them, and then convincingly projecting those images onto walls.

During the past four years, Ho has also been teaching art classes at San Quentin Prison. "I know them better than I know friends I have on the outside," she said of inmates.

Although most of the students who come to her class are primarily interested in painting, Ho said she encourages them to try out three-dimensional projects. For her first assignment, she asked them to make dioramas, in the style of her own.

"I thought a lot about how prison is very much about space and the control of space," she said. With the dioramas, she hoped that her students could construct a space to call their own, despite living in a place where that freedom is denied.

During long hours of pieces materials together, Ho's students would often recall exciting stories from their pasts, waxing poetic about the lives they had to leave behind. After a while, she realized that recalling spaces from memory can be just as powerful as creating physical ones. "Some of the guys I work with have been in for decades — over forty years — so they have to have hope that they'll get out someday," Ho said. "To relive their memories of the outside is their own way of resisting against the institution. No one can stop them from doing that."

That realization, in part, inspired Spaces from Yesterday, a series that merges Ho's teaching and personal practices by creating physical, inhabitable models of the memory spaces that inmates describe to her. "It's like [my] version of writing a biography about somebody or like painting a portrait," Ho explained.

About one-and-a-half years ago, Ho presented the idea to her class. Five students volunteered. One of them was Bobby Dean Evans Jr., an inmate who she met over a mutual enthusiasm for origami. He described in detail the garage of his mother's house, where he grew up. Crafty with his hands, Evans would spend endless hours working on his motorcycle there, and it felt like a personal space where he could be creative, he told Ho.

Next, Ho built a miniature version of the garage and photographed it. In the Chandra Cerrito installation, the image will be projected inside of a sparse, stand-alone room that Ho constructed. Aesthetically, it's a rather unremarkable image. But that's part of the point.

"All these spaces are really ordinary," Ho said of the memories that inmates chose. "Having an ordinary life to them is so amazing. I think it says something that for [Evans] it's this super special place." The other spots that Ho's collaborators chose include the hallway in a childhood home, the area underneath a shopping mall that once served as shelter, a fort built in the backyard of an abandoned house, and the aforementioned backseat.

Alongside the garage miniature in Ho's studio, there's an intricate mixed-media collage portrait of the garage made by Evans. Before he could finish it, Evans was transferred out of San Quentin, so Ho brought it back to her studio and has been finishing it up with tiny components that Evans made out of scrap materials — a broken chain necklace and salvaged cardboard, for instance — and mailed to her. 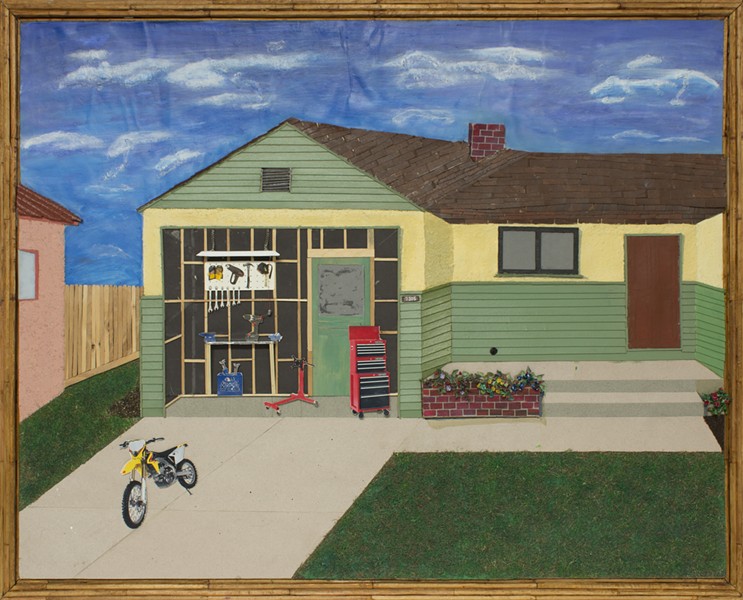 Evans' finished rendering will hang on the wall at Chandra. And every show in the series will feature a component made by one of Ho's collaborators. Dennis Crookes, the student who suggested the hallway memory to Ho, was unexpectedly released about eight months (due to California's Three Strikes Law being modified) and now lives in Los Angeles. In a recent interview, the longtime painter said giddily that he recently bought the biggest canvas that Michaels craft store offers, and is finishing up on a large-scale painting of the hallway — where he and his older sisters used to get up in the middle of the night to play board games near a night light. Crooke's work will hang in the second installment of the series, which will take place at Royal Nonesuch Gallery in October.

Although the other incarcerated artists won't be able to see Ho's installation, that doesn't faze her, because she's sure that her hazy recreations won't nearly live up to the memories they can access mentally. Rather, the intention for the project is to allow the memories to, as one student articulated back to Ho, "escape the prison." By allowing viewers to physically experience the chosen spaces, Ho hopes to create a connection between viewers and inmates by creating an opportunity for them to share some version of the same memory.

"I'm somehow trying to capture their story into an experience for a third party," said Ho, "and then hoping that it will live on that way."