Sheriff's deputies allowed ICE agents into a locked area in Santa Rita Jail to arrest an immigrant woman who had committed no crime. 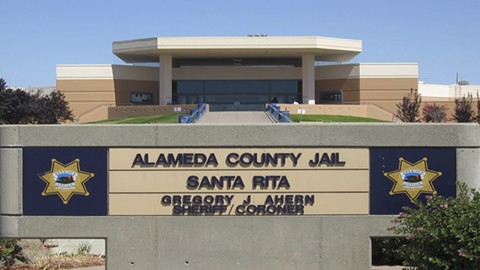 Eighteen years ago, Maria Ortega Rangel left her home state of Nayarit, Mexico and came to California in search of a better life. In Oakland, she got married, but in 2006 her husband was tragically murdered. The crime was never solved. Years later, she met another man, married a second time, and they had a baby girl.

Life's a "mixed bag," she said in a recent interview, with "happy and sad moments."

Ortega, who runs a small business making tamales while raising her 10-year-old daughter, said she wants a better life for her three children. Her two adult sons also live in the East Bay. She no longer has close family in Nayarit.

Until this year, she's never been in trouble with the law, but her current husband got her into a legal mess — but of the kind that California's sanctuary policies were meant to prevent. Now, she's lost her home, is facing deportation, and fears she'll have to take her daughter, who is a U.S. citizen, back to the poverty of rural Mexico.

Her problems began on Jan. 23, when Alameda County Sheriff's detectives entered her home with a search warrant. They found what they were after in Ortega's bedroom: a large quantity of heroin hidden inside a dresser.

Ortega cooperated with the detectives from the start. According to a report written by sheriff's deputy Aaron Bjork, Ortega told them the drugs belonged to her husband, who was not home at the time.

The detectives arrested Ortega, and initially, the district attorney brought the full force of the law down on her. Prosecutors accused Ortega of drug trafficking. They recommended she not be allowed to post bail because any money she might access could have been "feloniously obtained." Alameda County Judge Roy Hashimoto signed off on the order. Prosecutors then charged her with four felonies, including possession with intent to sell and willful cruelty to a child because the drugs were kept in the house where her daughter also lived.

However, four months later, prosecutors dropped all of the criminal charges against Ortega. It became clear the drugs were, in fact, her husband's — and that Ortega didn't feel safe or at liberty to ask him not to store drugs in her home. In other words, she and her daughter were innocent and afraid bystanders.

But this wouldn't matter, especially once federal Immigration and Customs Enforcement agents became aware that Ortega — who is undocumented — was being held in Alameda County jail. ICE wanted to arrest and deport her, and the easiest way to do it would be to grab Ortega while she was still in the sheriff's custody.

How ICE managed to coordinate Ortega's arrest with the sheriff is now the subject of a legal controversy that is putting Alameda County Sheriff Gregory Ahern's policies under closer scrutiny.

Several attorneys who have defended Ortega in criminal and immigration proceedings stemming from her January arrest on drug charges believe that sheriff's deputies working in the jail broke state law by tipping off ICE about the exact date and time they were going to release Ortega. The attorneys believe that if the deputies had followed the law and simply released her, Ortega could have avoided being illegally jailed by ICE for four months — and might not now be facing deportation.

Already, a federal magistrate judge found that an immigration judge employed by the U.S. Department of Justice wrongfully denied Ortega the right to post bond and instead had her jailed from February to May.

"The Alameda County Sheriff's Office violated the California Values Act at several junctures," Saira Hussain, a civil rights attorney with the Asian Law Caucus, alleged in a claim filed against the county in August on behalf of Ortega.

If true, the case would amount to a violation of the California Values Act, also known as Senate Bill 54, which went into effect Jan. 1, 2018. Known also as California's "sanctuary" law, it bars state and local law enforcement officers from communicating with immigration agents to enforce immigration laws — except in select cases where a person has been convicted of a violent or serious crime, or after a magistrate judge has found probable cause that a person committed a violent or serious crime.

The law, which the California State Sheriff's Association lobbied against last year when it was being considered by the Legislature, is meant to prevent the deportation of people who haven't been convicted of a violent or serious crime.

"People told me Oakland is a sanctuary," Ortega said about the experience. "You can't be turned over to ICE."

But Ortega was turned over to ICE. And the timing of the handoff between the sheriff and ICE agents is what led Ortega's attorneys to conclude that deputies in Santa Rita Jail improperly collaborated with ICE.

On Feb. 6, two weeks after Ortega was first arrested on drug charges, sheriff's deputies took her from Santa Rita Jail in Dublin to court in Hayward for a bond hearing. During the hearing, Alameda County Judge Armando Cuellar found that Ortega wasn't a danger to the community, nor a flight risk. He ordered the sheriff to release her from jail that day.

Sheriff's deputies drove Ortega back to Santa Rita that afternoon. According to the claim filed against the county, they placed Ortega in a pod with other inmates for several hours. She went to sleep. When she woke up later, deputies escorted her to the release section of the jail. According to Ortega's attorneys, it was in this locked, non-public part of the jail where an ICE agent suddenly arrested her.