Julia Bathasar sits on a step in the shade, fanning herself as the afternoon heat rises. She has multiple sclerosis, so staying cool is vital to her health. She also needs to lose 50 pounds before she can have knee replacement surgery. She’d love to jump in to the swimming pool, which is no more than 30 feet away from her front door, in the center of the courtyard at the Bayview Apartments. But there’s a fence around it, and not everyone is allowed to use it.

“It’s like they’re giving us the middle finger in the middle of the courtyard,” she said of her landlord keeping the pool closed. Many of her neighbors also don't have keys to the pool. They say their landlord has told them it will remain closed this season — again.

But the pool is but a single drop of water when it comes to the waterfall of issues many residents say they’ve experienced since the current landlord bought the 33-unit complex at 470 Central Avenue in Alameda in 2015.

The first wave of drama was eviction notices, sent to each-and-every resident in the fall of 2015. Since, “470 Central” has become the poster-child for rent control in Alameda, as renter groups fight to enact meaningful protections from landlords using “just cause” evictions.

Despite a defeat on this past November's ballot — a renter-written ordinance that voters rejected — and a recent wave of eviction notices, residents at 470 Central are hopeful for June 6: That's when Alameda City Council is scheduled to vote on new "just cause" renter protections.

Their landlord, however, says Alameda will ultimately lose should just-cause provisions pass. Matt Sridhar, the owner of the apartments and CEO of the San Jose-based Sridhar Properties, originally attempted to evict all tenants from the building just before Christmas in 2015. Since, he’s been a vocal opponent of “just cause," going so far as to threaten to sell his properties in Alameda should the ordinance pass.

“Just cause is a disaster,” Sridhar told the Express. “The people of Alameda did not vote for that” when they passed Measure L1 last year.

On its website, Sridhar Properties shows designs for a new façade at the Bayview Apartments, complete with exposed wood and faux-rock paneling. The “before” picture shows it in its current, weathered state, complete with a Dumpster out front. It’s Sridhar’s only property listed in Alameda.

The landlord says his intention was to create “a beautiful waterfront property” to “attract young professionals to bring up the neighborhood.”

Instead, he says, a few “undesirable tenants” acted belligerently and held loud parties, making the complex an unsafe place to live. “Some of these residents feel they have the right to do this, and the council has sided on their behalf,” Sridhar said. 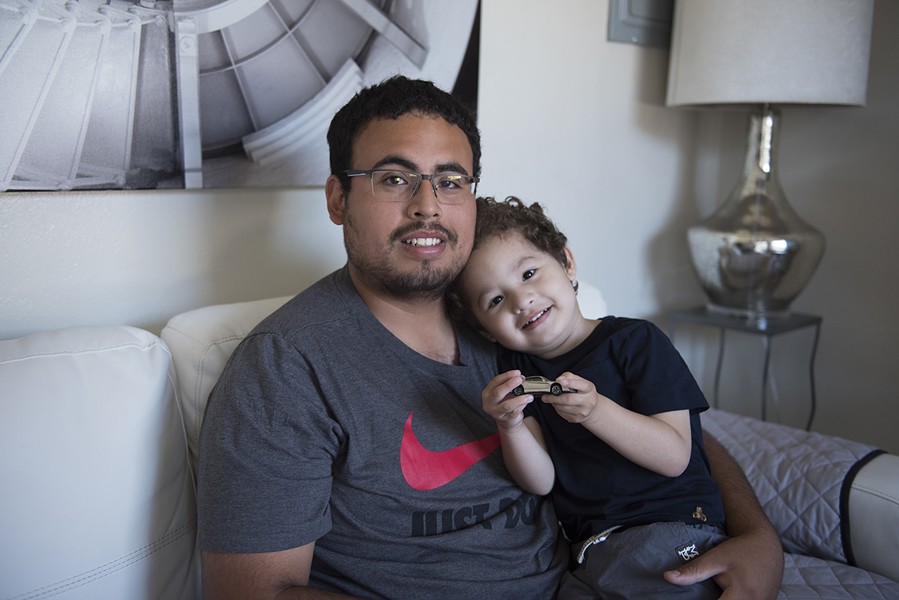 Sridhar has been serious about moving out tenants. In their four years at 470 Central, for instance, Christian Muñoz, his wife, and their son say they've received three eviction notices.

The first came in 2015, and gave them three days to vacate. The latest, he says, arrived earlier this month, when a man identifying himself as a San Jose police officer knocked on their window at 10:30 p.m. to serve a 60-day eviction.

Muñoz says he pays his rent on time each month. “It’s not about the money,” he told the Express. “They want us out.”

Current Bayside Apartment resident Rosemary Almasco said she watches her 11-year-old son walk to William G. Paden Elementary every morning through the window. She can’t walk with him, though, because of her cerebral palsy. So, she uses a motorized scooter, which she has to leave outside, because her apartment lacks a ramp up the two front stairs. “So, I just crawl,” she said.

She says her family pays its $1,600 rent every month, but they too were among those at 470 Central who received the most recent eviction notice, also with a knock on their window.

Alameda councilmembers have requested the city attorney to investigate the eviction notifications.

By now, most of the previous tenants of the Bayview Apartments have left and found new places to live. Some of their apartments have been refurbished and rented out to new tenants, for $1,900 or more. About half-a-dozen residents have been fighting for more than two years.

Just cause protections in Alameda were backed by groups like Filipino Advocates for Justice, Alameda for Black Lives, and the Alameda Renters Coalition. Mari Perez-Ruiz, president of ARC, said some renters are facing upward of a 30 percent increases in monthly rents, which she argued has shrunk the city’s Black and Latino communities, while also putting strain on people with low incomes, seniors, and people with disabilities.

“Since this decision was made, there’s a sense of relief,” Perez-Ruiz told the Express of Alameda recent vote to move forward just cause. If the ordinance passes on June 6, she feels the city will be “moving toward being an inclusive community.”

Muñoz said the vote felt good. “It’s the first time you don’t have to worry about an eviction notice,” she said.

If it passes, Alameda would join other Bay Area cities like Oakland, which offers renters — of which more than half of Alameda residents are — some form of a lifeboat in an increasingly competitive and expensive housing market.

They're going to need it: A listing for the Bay View apartments advertises the 500-square feet units for up to $2,295 a month. It also bars Section 8 housing and, perhaps ironically, people with prior evictions. Advertised as “quiet and quaint,” the listing boasts that students living there attend local schools, and that the pool is available “for your relaxation.”