Harry Hu, a former Oakland cop, is under investigation for alleged involvement in a racketeering and extortion ring. 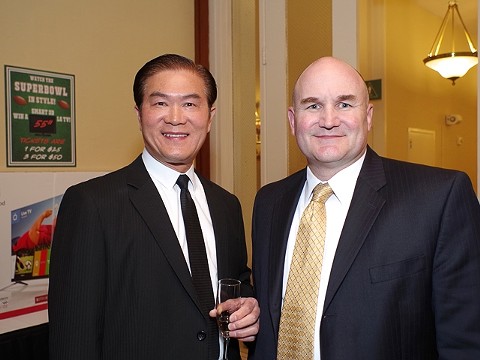 A former Oakland police officer who until recently worked for the Alameda County District Attorney’s Office is under investigation by the FBI for alleged involvement in a racketeering and extortion ring, according to multiple law enforcement sources.

Harry Hu ran the Oakland Police Department’s gang unit for years, focusing on organized crime in Chinatown. He was first hired by OPD in 1981 and retired as a lieutenant in 2007 after 26 years. While with OPD, Hu worked in federal organized crime task forces with the FBI and Drug Enforcement Administration. Hu also led training within OPD regarding organized criminal activity in Oakland’s Asian communities.

Then-Alameda County District Attorney Tom Orloff hired Hu as an inspector in 2007. At the DA’s office, Hu was responsible for investigating and building cases. Hu’s salary at the DA’s office was $125,518, according to public records.

Current District Attorney Nancy O’Malley and Chief Inspector Robert Chenault did not respond to an email sent last week requesting information about the FBI investigation of one of their staff members.

Teresa Drenick, a spokesperson for O’Malley, said Hu recently left from the DA’s office, but Drenick could neither confirm nor deny the existence of an FBI probe.

According to an NBC Bay Area report last night, Hu may have been identified by the FBI during the sweeping investigation into Raymond “Shrimp Boy” Chow. Investigative reporter Jaxon Van Derbeken wrote that Hu may have known in advance of Chow’s plot to murder his rival Allen Leung in 2006.

The FBI told the Express it could neither confirm nor deny any investigation into Hu. The U.S. Attorney’s Office also did not reply to a request for information.

Law enforcement sources also said that a second former Oakland police officer is under investigation by the FBI in the same case. This officer currently works for Alameda County, but not in the District Attorney’s office.

In an interview conducted years ago by Luis Martinez, a UC Berkeley Journalism School student, Hu described immigrating to San Francisco from Hong Kong where he was constantly around gangs. In the Bay Area, Hu continued to associate with gang members, but he ended up becoming an Oakland cop, not a gangster.

“I knew a lot of them, some of them were friends,” Hu said I the interview about Asian gang members. “I know all about these guys, how they do things - their mind set.”

Hu is well-respected in Oakland’s Chinatown and has received many awards over the years. He was awarded the Medal of Merit from the Oakland Police Department, and received a Life Time Achievement Award from the Asian Gang Investigators Association of California, a law enforcement group. Most recently, in 2015 he was recognized by the Wa Sung Association with a “Lifetime Achievement Award” presented to him by then Assistant Oakland Police Chief David Downing.
Prev
Next