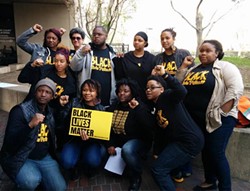 Alameda County District Attorney Nancy O’Malley announced today that she is dropping charges against a group of Black activists known as the Black Friday 14.

The Black Friday 14 stopped a BART train last year at the West Oakland Station on the shopping holiday known as Black Friday for 4 hours and 28 minutes in a protest against police killings of unarmed Black people.

After being arrested, members of the Black Friday 14 were booked at Santa Rita Jail. The BART transit system initially sought to recover $70,000 in “restitution” from the activists, but after significant pressure from the community, including protests at several BART board meetings, the transit system’s board of directors dropped this demand. O’Malley, however, pressed ahead with misdemeanor criminal charges of trespassing on railroad property.


Over the past year the Black Friday 14 and their supporters have waged a campaign to convince O’Malley to drop the charges. Most recently Bay Area labor union leaders and clergy occupied O’Malley’s office at the Wiley Manuel Courthouse in downtown Oakland. In May, the Alameda Labor Council uninvited O’Malley from an awards ceremony in her honor after she declined to drop charges against the activists.

In a press release today, the district attorney said her decision to drop charges against the Black Friday 14 are the result of an agreement with the activists that they would not disrupt BART train services on Black Friday this year, and that the activists also acknowledge their actions were a “violation of the statute governing the safe and efficient operation of public transportation.”

O’Malley characterized the agreement as a “restorative justice” process which also allowed the Black Friday 14 to “more deeply express their own experiences as well as those that have brought to the national and local forum the circumstances leading to the Black Lives Matter movement.”

Allies of the Black Friday 14 maintain that O’Malley discriminatorily prosecuted the group, seeking criminal convictions for acts of civil disobedience. For example, Black Lives Matter Bay Area, a chapter of the Black Lives Matter movement, wrote on their Facebook page today, “unlike hundreds of other protesters who blocked trains, buses, and traffic, the Black participants in the [Black Friday] civil disobedience were criminally charged by the DA, and a $70K restitution [was] demanded by BART.”

In a press release also issued today, the Black Friday 14 celebrated the DA’s decision to drop charges. The group wrote, however, that they believe there is a pattern to be drawn in the non-prosecution of police officers who commit violence against Black people, and the criminal charges that many activists are facing for participating in protests against police brutality.

The Black Friday 14 wrote: “While District Attorneys across the country are using their discretion to not indict police officers who kill unarmed Black people, and others are pursuing discriminatory charges against Black activists engaged in civil protest — DA Nancy O’Malley has listened to thousands of local voices, reviewed the facts, and thoughtfully chosen to end the prosecution of Black activists protesting for their right to live.”