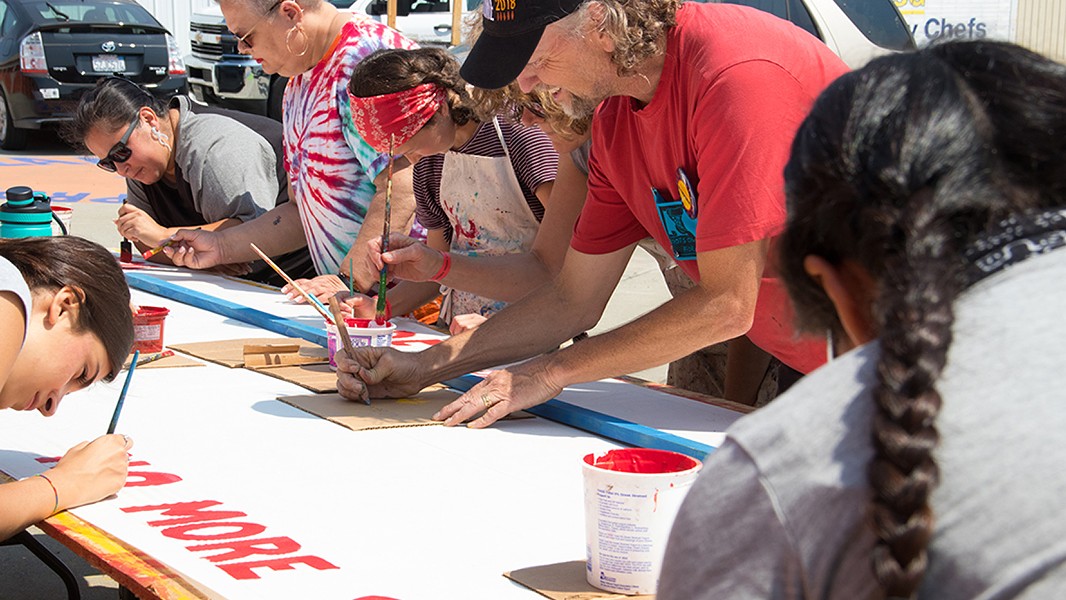 Tens of thousands of people are expected to take to San Francisco streets Sept. 8 for the Rise for Climate, Jobs & Justice march, the grassroots complement to the Global Action Climate Summit taking place Sept. 12-14. When they do, they will be greeted by 55 huge street murals, serenaded by "street choirs," and joined by giant puppets and hand-painted banners.

Much of this art will have been generated in the East Bay.

Internationally known art activist, puppeteer, and co-founder of Art and Revolution, David Solnit is also the North American arts organizer for 350.org, one of the march's major sponsors. At his Richmond workspace, Solnit has hosted multiple groups learning to create temporary tempera and clay paint murals, as well as design and paint banners carrying their groups' messages. Recently, Indian People Organizing for Change (IPOC), the Interfaith Coalition, and a Pacific Islander contingent mustered volunteers at the space to access Solnit's help on their banners. The Pacific Island banner will read "Moana Nui ej adwoj" ("The Pacific Ocean is Our Homeland") and the Interfaith Coalition's will state "People of Faith Coming Together to Protect our Common Home."

Solnit also points to Idle No More SF Bay, founded by indigenous Native Californians, who hosted a workshop on Aug. 25 at Oakland's Intertribal Friendship House to solidify their key role in helping lead the march as it unfolds and will also be creating art for the event.

Solnit has decades of experience of art activism and is known for his belief in the power of the arts to "change the narrative." The march will feature Solnit's giant puppets, including his famous Jerry Brown head, though Solnit was unsure which group would end up with the honor of featuring it. Along with the Brooklyn-based Peace Poets, Solnit has been traveling the state on the "Rise Arts Tour," generating attention and activities in cities other than San Francisco for march day and beyond. "The most powerful way to tell stories — even to explain science — is through the arts," he said.

Oakland portrait and pastels artist Katy Polony would agree. Though not a graphics designer, she agreed to design the street mural being used at the march for the "No Coal in Oakland" group. "We are facing no less than a climate catastrophe," she said. Like all the mural designs, Polony's was created to be executed by a group of non-artists, using a grid. "Sort of like paint-by-numbers," she explained. The bold image will emerge in black, red, and yellow.

Polony is a member of the East Bay-based environmental activist group Sunflower Alliance, and has participated in their freeway overpass bannering. She is enthusiastic that the march is offering art projects that all people can participate in. "I want them to feel, 'I can help with that,'" she said.

Creativity in the streets, she said, is both festive and uplifting, giving marchers something to be joyous about. Post-march, she hopes that some of the images can be used to help continue the fight against climate change, "calling attention to the urgent nature of it."

Thrive East Bay and its Oakland-based choir have been tuning up for the march's "Choral Flashmob," which the group believes will be the largest singing climate mobilization ever assembled in one place. On Aug. 30, the Thrive Street Choir and the Peace Poets conducted a workshop in Oakland to teach and practice the songs the choir will be singing at the Embarcadero Plaza during the march. At this workshop, the choir taught both songs about climate justice and techniques for being an effective song leader for the mobilization.

Those who drive by the historic Oaks Theatre in Berkeley on Monday nights from 5 to 6 p.m. have seen Occupella during its weekly "Tax the Rich" sing-alongs. Known for its appearances at BART stations and elsewhere in the Bay Area in support of progressive causes, the group will be mounting a "Curbside Climate Chorus" for the march. Occupella's so-called "Environmental Justice Songbook" includes tunes such as "Bee My Baby," "Bye Bye Coal," and "Let's Frack." Some of the lyrics for "Exxon Lied" run: The scientists in their employ / Told them what they would destroy / But profits rose and they said, "Oh boy! / Throw them into prison!"

Though playwright Sharmon J. Hilfinger and director/designer Giulio Perrone will be in rehearsal the day of the march, Hilfinger sees the upcoming production of her newest work, The Gods Are Not Happy! A Dark Comedy for Dark Times, as part of the arts' continuing call to action on climate change — and, in a sense, an extension of the summit. "Given this crazy news cycle, the issue of the environment keeps getting pushed down the list," said Hilfinger. "But it is the most pressing dilemma of our time."

A co-production of Inferno Theatre of Berkeley and BootStrap Theatre Foundation, the piece plays Oct. 12-28 at Oakland's Brooklyn Preserve. Hilfinger and Perrone met in 2015 while collaborating on another environmentally themed play, Arctic Requiem: The Story of Luke Cole and Kivalina, produced at San Francisco's Z Below. Shortly thereafter, they began working on what became The Gods Are Not Happy, working through several drafts and workshops.

The play's plot brings together an international cast of gods, who must create a solution to global warming. According to press materials, "They devise a Silicon Valley-style solution, and to raise money for this, they kidnap a pair of elderly billionaire brothers." Asked about the basis for "the pair of billionaire brothers," Hilfinger admitted that a last name pronounced the same as a soft drink was accurate.

A special performance will be held Oct. 26 at the David Brower Center in Berkeley, featuring a panel discussion with representatives from East Bay environmental nonprofits Earth Island Institute; The Center on Race, Poverty and the Environment; and The Greenlining Institute. Hilfinger noted that the company is planning other post-show discussions for audience members during the rest of the run.

Circling back to the idea posited by Solnit, Hilfinger observed, "Theatre has a kind of staying power. You remember a story like you remember a person." A story that she, along with hundreds of artists helping create the Rise for Climate Change March, hopes will resonate long after the marchers have gone home. 