Much of Saturday's protest focused on the need to protect East Bay children.

On a neighborhood ball field just a block from several huge, unused fuel tanks, about three hundred residents of the East Bay city of Pittsburg and neighboring communities, joined by environmentalists from around the Bay Area, gathered Saturday to protest the plan to develop a massive crude oil transportation terminal there. WesPac Energy Group wants to restore the fuel tanks and add rail and shipping connections to create a hub that would bring up to 375,000 barrels of crude oil a day to this quiet residential neighborhood close to downtown Pittsburg. 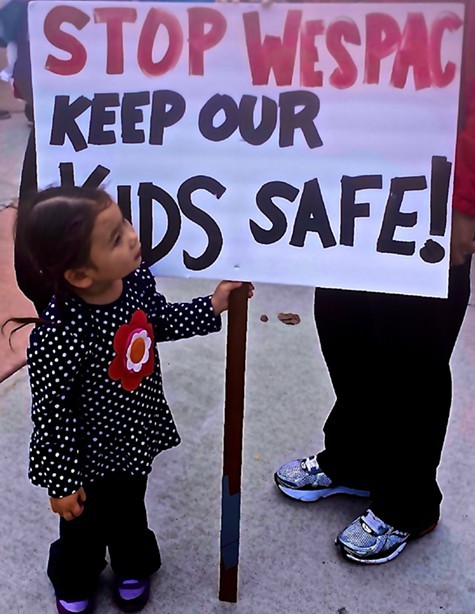 Art Diefenbach, spokesperson for WesPac, has assured the public on many occasions that the fuel tanks and rail cars would meet the highest safety and cleanliness standards, but neighbors fear the project will increase air pollution and create a danger of spills, derailments, and explosions. Pittsburg residents speaking at the rally cited recent explosions of derailed trains shipping crude oil in Quebec, North Dakota, and elsewhere. Lyana Monterrey, who helped spearhead local opposition to the project, said trains carrying crude oil are “bombs on rails.”

Speakers also referred to a current disaster stemming from the processing of fossil fuel: the ongoing crisis in West Virginia, where a toxic chemical used in coal mining, 4-methylcyclohexane methanol, has contaminated the water supply of 300,000 people.

Analysts at the Natural Resources Defense Council (NRDC) and Communities for a Better Environment (CBE) have predicted, based on trends in the petroleum industry, that the WesPac project would bring in extremely dirty crude oil from the Alberta tar sands. Diefenbach has denied any plans to bring in tar sands oil, saying instead that the crude oil would be higher quality, fracked from the North Dakota Bakken shale fields.

The racially diverse crowd in Pittsburg on Saturday included many teenagers and families with children — the need to protect the community’s children was a theme of many speeches and signs. At one point two young sisters read, in unison, a poem they had written about why they opposed the WesPac terminal.

After the rally, the group conducted what may have been Pittsburg’s first protest march, walking several blocks to City Hall. There, the crowd heard from longtime Richmond activists Henry Clark (West County Toxics Coalition) and Andres Soto (CBE), who described their struggles against pollution from the Chevron refinery and pledged solidarity with Pittsburg residents. Soto urged residents to run for office to take local government out of the control of oil companies, whereupon Pittsburg resident George Monterrey announced he had decided on the spot to run for city council next fall.

Since first learning of the WesPac project only a few months ago, Lyana and George Monterrey and other residents created a new organization, the Pittsburg Defense Council, to oppose it. They went door-to-door spreading word of the proposed terminal and enlisted the support of local pastors and community groups, as well as environmental organizations including the NRDC, CBE, the Sierra Club, and 350 Bay Area. They plan to continue their campaign against the WesPac project, turning out supporters for a January 21 city council discussion of the plan. The council is expected to make a decision sometime in February.