The ACLU of Northern California and the law offices of Amitai Schwartz filed a lawsuit against the Hayward Police Department on Tuesday, alleging that the agency is charging exorbitant fees that effectively prevent the public from obtaining police body camera video footage. The lawsuit comes as a result of a Public Records Act request filed by the National Lawyers Guild (NLG) in January of this year. The NLG was seeking video taken by Hayward police officers who were called into Berkeley in December 2014 to respond to Black Lives Matter protests. During those protests, police, including the Hayward PD, used less-than-lethal weapons against protesters.

(See the end of this post for a copy of the lawsuit, and a Hayward police body camera video clip obtained by the NLG.)


According to the lawsuit, the Hayward Police Department informed the NLG on May 15 that it would turn over approximately ten and a half hours of police body camera video only after the NLG paid $2,938.58. The NLG paid the fee under protest, and Hayward turned over some of video footage that the group was requesting. But the NLG has asked for the city to return its money, stating that the fee is illegal. And the NLG has asked Hayward to provide more video footage sought in the original request. 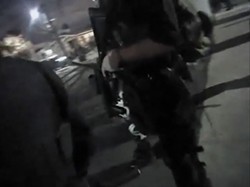 "The NLG always protested the charge, but they wanted the videos," said Alan Schlosser, Senior Counsel with the ACLU of Northern California.

Schlosser said the purpose of the Public Records Act would be thwarted if Hayward is allowed to charge high fees for the body camera video footage. "I don’t know of any cities that are imposing this kind of fee on body camera footage," Schlosser added.

The Hayward Police Department did not return a phone call seeking comment.

The NLG also asked for body camera footage from the Oakland police, but Oakland has not responded yet to the group's request.

In one of the Hayward police body camera videos from last December obtained by the NLG, a group of Hayward police officers appear to be holding a line against a protesters, blocking them from passing through a parking lot. One Hayward cop then says, "Alright, we're going to start fucking blasting them." Moments later the same officer fires what appears to be a less-than-lethal shotgun round and says, "Got him in the hip." Other officers can be heard complaining about rocks being thrown at them. Some Hayward police officers in the video appear to be wielding 40 mm exact impact round weapons, which fire "sponge rounds," plastic oblong projectiles with a foam tip.