IGrow owner Dhar Mann's brash capitalism irks the “progressives” who've gone to jail for the freedom he's monetizing. But it's not slowing down his plans.

Bounding down the stairs in a well-cut suit, 25-year-old Mann converses with his staff of nineteen. He's in meetings all day for University of Cannabis' Saturday launch. Hundreds of customers, activists and politicians will attend. Led by Chancellor Leo Bazille — a sorta shady former Oakland councilman — University of Cannabis launches this weekend with eight live courses on growing, law, and cannabusiness for $50 each. Taught by pro gardners, long-time activists, and Mann himself, each class will then be available online. 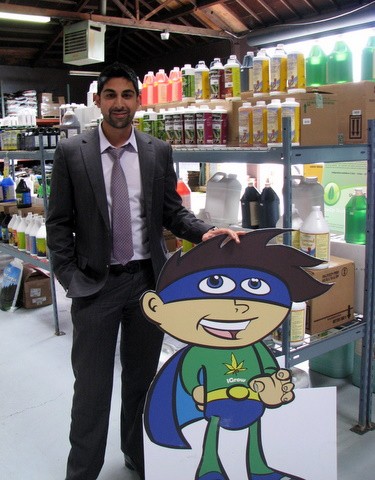 Mann will then ramp up University of Cannabis' online offerings to twenty courses that can hold up to 3,000 students each, and he's going to pack them. Upstairs in his office on his MacBook Pro, he reads countless inquiry e-mails; one from a former superior court judge in Texas who wants to be the “first student” and a spokesperson. He has e-mails from soon-to-be customers in China and Germany.

Mann has also set up a system of four certifications, from “Seedling” to “Cannalebrity.” Their value comes from their scarcity, which, like any other college, is maintained by the barriers to achievement that he's erected. He's in regular contact with local regulators, so that on the day governments stipulate the need for some type of accreditation, University of Cannabis intends to be an accreditor, joining leading educational group Oaksterdam University.

Dhar says he has Oaksterdam University owner Richard Lee's tacit blessing for the competing school. Maybe because Lee's classes are packed. People all over the world are looking to the Bay Area for best practices, and Mann is keen on providing the world whatever it wants.

Born and raised in Oakland, and the son of entrepreneurs, Mann dropped out of UC Davis at nineteen to create a company brokering the last bubble: mortgages. At its peak, he says he moved $40 million in loans a month, pocketing bigger salaries than his professors and employing dozens of his peers. Mann got out before the bubble burst, and went to Oaksterdam looking for his next enterprise. (He also has a limo service.)

He was neutral on the plant's uses and issues, but Oaksterdam galvanized his business sense, and iGrow was born. Mann sunk mortgage profits into his new hydroponics concern, iGrow; one that would operate like no other hydroponics store in the Bay — out in the open, advertising a specialty in growing the medicinal herb.

But that openess has already cost Mann plenty. When iGrow launched in January to incredible media coverage, Mann quickly lost every single one of his distributors. IGrow's warehouse went barren, and online reviews came in — savaging the upstart. “It was a huge setback,” Mann says. “They cut us off.”

Without caution or foresight, Mann had shed the thin negligee covering the Bay Area's sexiest economic asset. Hydroponics stores can make bank selling to amateur and professional growers of California's most valuable crop, yet in all hydro stores, the word marijuana is verboten.

Mann went to the gray market to refill the shelves, buying from other retailers. Simultaneously, he says he went around the powerful interstate hydroponics supply distributors directly to overseas manufacturers. He says he's made deals to cut out the middle man and become one himself — starting distribution company GrowOp Technologies to import and wholesale hydroponics supplies to iGrow, its franchises, and other retailers at severe discount.

More irons in the fire, GrowOp Technologies has sold 40, 35-foot, custom-made tractor trailers outfitted as self-contained farms. At $65,000 a piece, they combine the benefits of a sealed, off-the-shelf location to grow 30 to 40 pounds of product every 60 days, with the portability of a mobile SCUD missile. Roll them up to a property, hook up a 200-amp marine power cable and standard water and you're on-line. Out back behind iGrow, two tractor trailers sit in the weeds — under rehabilitation. The global economic downturn mired entire fleets of such trailers. GrowOp Tech is bullish on them.

Mann's also selling exclusive franchise rights to iGrow territories across California and looking to other states. He's courting venture capital money from Wall Street. “They're crazy for this industry,” he says. “They want in.”

He points to publicly traded cannabis company and penny-stock CMSI, up from a 52-week low of ten cents a share to 49 cents. The company has issued 500 million shares, with little sign of profit.

Out in the parking lot, more customers pull in. A banner for the on-site cannabis doctor waves in the breeze. Passenger planes out of the Oakland airport hurl themselves into a variably cloudy sky. Looking out across the airport's neighboring wasteland, an iGrow manager reflects on the stark new reality of this once-black market.

The old guard somehow didn't anticipate that normalization would lead to capitalization, he says. He doesn't understand why or how.

Across 880, on Oakland's rougher streets, they have a name for this process: “Big bank take little bank.” Every time.