For more than a decade, AC Transit made a mockery of federal Buy American rules. The cash-strapped transit agency routinely wrapped itself in financial knots, funneling US taxpayer funds through various accounts in order to be able to buy expensive foreign-made buses. AC Transit officials repeatedly claimed that the Belgian-made Van Hools were superior to American buses, even though the agency's own records showed that the Van Hools were accident-prone and dangerous for riders with mobility problems. AC Transit officials also downplayed the numerous posh trips they took to Belgium and their side excursions to Paris and London, arguing that $1 million in public funds they spent on the getaways merely represented the costs of doing business.

But then earlier this month, AC Transit, which now has a new general manager who appears to be more interested in making pragmatic choices rather than jetting off to Europe, officially ended its costly relationship with Van Hool. The agency's board of directors, at the urging of new General Manager David Armijo, voted 6-1 to buy forty buses from an East Bay bus-maker - Gillig of Hayward. It was the first time that AC Transit had bought an American-made bus, let alone one made locally, in more than a dozen years. And it was about time.

The new $16 million purchase not only will help East Bay union workers at Gillig keep their jobs, it will provide AC Transit riders with a superior bus-riding experience. Gillig has been manufacturing quality buses for a long time, and its buses are much safer than the dangerous Van Hools, which many riders took to calling the Van Hells.

But by being in Hayward - as opposed to Belgium - Gillig didn't fit the vision for what AC Transit officials, particularly former General Manager Rick Fernandez, wanted for the agency. Fernandez and other AC Transit board members, particularly longtime board member Chris Peeples, believe that Europeans were smarter, and knew how to build better buses than Americans. They were wrong. 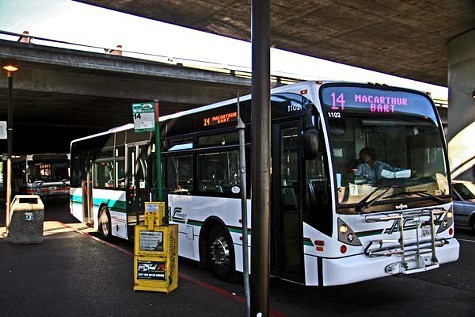 "They were sold to the board on the basis of, you know, how we elite Americans tend to think that everything is done better in Europe, so there was this feeling that if you want good transit, go to Europe," AC Transit board member Greg Harper, who became a critic of the Van Hools over time, told the Bay Citizen. "They just didn't turn out to be any of those things. They weren't better priced; they weren't better made."