Tom Henderson bought the iconic Tribune Tower and was hailed as an Oakland hero. The feds say it was all a con. 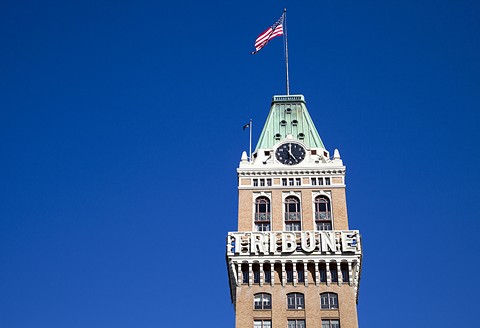 Thomas Michael Henderson promised Oakland everything: He would bring thousands of new jobs to the city to fill its historic buildings, open a grocery store in West Oakland, and start hip new restaurants all over the Town. He garnered glowing profiles in local newspapers and The Wall Street Journal, set himself up with a brilliant view of the city from its most iconic building, and even threw out the first pitch at an Oakland A's game.

The tall, lanky businessman came across as a bonafide Oakland booster, sincerely interested in helping the city thrive. He became politically active, too, hobnobbing with local politicians, cutting fat campaign donation checks, and dining on luxurious meals as he devised plans to create numerous business ventures with some of Oakland's most prominent entrepreneurs and most dogged community activists.

According to many of Henderson's former business partners and the U.S. Securities and Exchange Commission, it was all a fraud.

His former business partners and the SEC paint a picture of Henderson as a man out to enrich himself by taking millions of dollars from foreign investors seeking visas to the United States. The SEC sued Henderson for fraud on Jan. 17 after a series of business partners filed lawsuits accusing him of reneging on his agreements, hiding key financial information, and failing to pay back a $3.7 million loan from a West Oakland nonprofit.

Henderson was funding his businesses and his lavish lifestyle through a federal program that grants permanent residency in the United States to wealthy immigrants if they make an investment of $1 million or more — $500,000 for areas with high unemployment — and the investment creates at least 10 full-time jobs for American workers. The 27-year-old visa program, known as the EB-5, is designed to spur the domestic economy through foreign investment.

In recent years, the program's popularity has soared, jumping from $240 million in investments in 2007 to $4.4 billion in 2015, according to a report by financial adviser Brandlin & Associates. And as the visa program has grown, the SEC has warned of scams in which unscrupulous investors make false promises to immigrants who are eager for green cards.

To attract foreign investors, Henderson used slick marketing materials detailing his many East Bay business proposals. From 2010 through 2016, he raised a total of $115 million in capital contributions from 215 investors, primarily from China.

According to interviews with his former business partners, allegations they and the SEC have made against him in court, and interviews with former business associates and others who interacted with him during his extensive affairs in Oakland, Henderson moved the EB-5 money from company to company in an elaborate shell game: first setting up a nursing facility, then a series of CallSocket call centers, and then proposing to develop a grocery store, among several other ventures. At first, he would do what he promised but then would misappropriate some of the funds he collected for expensive purchases, according to the SEC and his former business partners.

Records show that Henderson spent $42 million on real estate in Oakland from 2012 to 2014, gobbling up historic downtown landmarks like the Tribune Tower, the former I. Magnin building, and the Dufwin Theatre. He also bought a $1.4 million home in Oakland's Upper Lakeshore area. But he created few jobs; the Tribune building still needs repairs; most of his planned restaurants never opened; and West Oakland still needs a grocery store.

Henderson declined to be interviewed for this report through his attorney, Gilbert Serota. In an email, Serota wrote, "Mr. Henderson is currently engaged in defending himself against allegations by the SEC and others that he views as based on inaccurate facts and mischaracterizations of his conduct. Because of the ongoing litigation, we have advised him not to be interviewed by any press or media."

The ongoing litigation against Henderson is extensive and has left a tangled web of competing interests, all trying to recover what they can from his tattered empire. Assets from his many companies have been placed under court control, throwing the future of his businesses in doubt, delaying development of his properties, and angering investors. Many investors are also worried about potentially facing deportation.

In May 2016, as Alameda County Superior Court Judge Julia Spain worked to unravel Henderson's complex network of business dealings, she noted during a hearing how easy it is for unscrupulous business people to game the EB-5 program. She pointed out that the law only requires that a business be temporarily viable for the foreign investors to get their green cards. "If you can keep a sham up for five years," she said, "and all your investors get their green cards, mission accomplished."


Tom Henderson frequently pointed to his background as an East Bay native and successful businessman in order to sell his ambitious proposals, but large chunks of his biography are mysterious. He told the San Francisco Business Times that he grew up in Piedmont. According to his former LinkedIn profile, which was deleted earlier this year, he had a basketball scholarship to attend UC Berkeley from 1966 to 1970 and earned a degree in business administration.

He started a seafood importing business, Avalon Bay Foods Inc., in the 1970s that he ran until the 1990s, according to a short biography on the website of his current company, San Francisco Regional Center. The bio claims that he grew Avalon to thousands of employees through joint ventures in Asian countries and with British Petroleum before selling it to a "multi-national strategic buyer." Avalon Bay Foods appears to no longer exist; no businesses are registered with that name either with the SEC or with the state of California.