A sampling of some the best games of the moment — and decade.

People love games — both playing them, and giving them as gifts. We have a special fondness for board games that bring people together at a table, face-to-face. Video games involving cooperation can do the same thing. Here is a short list of games you might enjoy giving or playing during the holiday season.

Unlike video games, board games usually don't have a suggested retail price. Prices can vary widely depending upon where you shop and current availability. We've included approximate prices.

This economic game of bird collecting has caught fire, in part because of the beautiful artwork and descriptions of bird species on the game's cards. Players collect bird cards to populate their own aviaries. The row of your aviary in which you place your new bird determines the benefits you receive. Filling the same row with more birds gives you greater and greater rewards. However, the same row also becomes successively more expensive, tempting you to use a cheaper and less rewarding row instead. The birds also have abilities that can be strung together to great effect, weighing on your decisions.

There are people who have been waiting decades for this former Avalon Hill game to be reprinted, and at last, here it is. Up to six players struggle for Frank Herbert's desert planet in this science-fiction game of diplomacy and treachery. The most important substance in the universe, the spice Melange, used both in space travel and to grant long life, can only be found on a nightmare planet of destructive sandstorms and deadly giant worms, and everyone will kill for it. The planet Arrakis has never been more asymmetric — each faction in this game, from the underdog House Atreides, to the vicious House Harkonnen, to the prescient Bene Gesserit, has wildly different powers.

The Azul family of games is nice to look at, easy to understand, and challenging to master. In this third game of the series, players draft colorful diamond-shaped tiles to try to fill in their own star-shaped mosaics. The tricky part is that if you want tiles of a certain color, you must take all the ones of that color that are available — and if you take more than you can use, you are penalized. If you never played the first Azul game, you might consider getting that one instead, to see what the fuss is about — but it's not necessary.

There are many engine-building games — in this one, you're literally assembling a factory to make chocolates. Players draft factory parts from the middle of the table, and each factory receives free cocoa beans from the supply. The factory parts you draft turn these beans into chocolate bars, caramels, nutty bars, or ultimately into fancy boxed sets, in accordance with how you arranged your factory. Each player has individual goals, but also are competing to fill the orders of large department stores, creating a tension between being different from everyone else and being better at the same thing as everyone else. We like the pieces because they look delicious, and the artwork of this game has a charming "Penny Lane" sensibility. 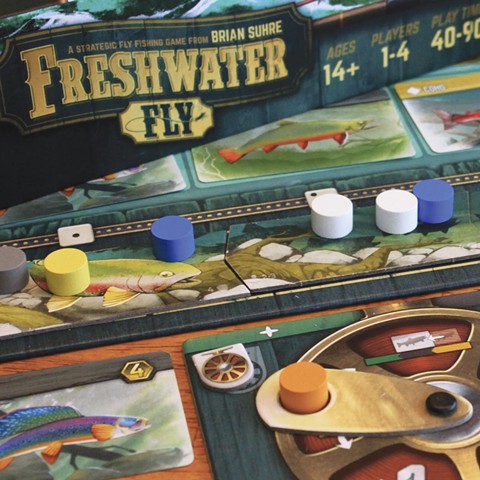 This beautiful game of catching fish isn't out yet, but it is slated to arrive before December. We have played it, and it's a lot of fun. A large group of dice are rolled each round, and the players select the rolled dice one at a time to cast, hook, and reel in different fish. The players can also use the dice, and "finesse points" they've earned, to acquire abilities that can be combined to take extremely clever and devastating turns. In a way, that makes Freshwater Fly fun for those who like puzzles as well as games.

The new installment of the "looter shooter" was highly anticipated for good reason. The Borderlands is first-person science-fiction mayhem where you fight bandits, evil corporate enforcers, hostile alien wildlife, and devious bosses on an alien planet. This time, on many planets. Borderlands is also about wielding crazy powers, and new playable characters include a robot with monster pets, a young woman soldier with a devastating walking mech, and others. It wouldn't be Borderlands without insane guns, and those are here too, shooting torrents of radiation, firing freezing bullets that turn enemies to ice sculptures, or sprouting legs and running around the battlefield on your behalf. It's totally insane fun, with co-op for up to four players.

Mario is immediately familiar — this game allows you to make your own levels for the intrepid little plumber, and play levels made by other people around the world. It's a very simple and very elegant concept, but you can make it complicated and devious. Choose your graphic set to make your levels look like Mario games from different generations of consoles. Multiplayer levels can be created, where you and friends do the courses together.

Samurai Shodown is a 2019 revision of the classic fighting game from 1993. Fight opponents in one-on-one battles featuring samurai, ninja, and other warriors from around the world. This game focuses less on combo sequences than do other fighting games such as Street Fighter or Mortal Kombat, and instead is more about pressuring the opponent, baiting, and scoring devastating single hits or short combos. That's part of why we like it, although it's also beautiful to look at. There are some new characters here, if you're familiar with the series.

Ori and the Blind Forest is a few years old, but the Nintendo Switch version didn't become available until September. Ori is a "Metroidvania" game — that is, you explore a large and beautiful landscape, with numerous areas cut off to you. Obtain new powers in the mysterious forest, which now allow you access to new places you couldn't get into previously. This game is stunningly beautiful, with fantastic music, and is also quite challenging.

As we near the end of the decade, we asked ourselves, what is the game of the decade? The answer was instantaneous. We felt we would be remiss if we didn't mention Minecraft, despite the fact that this game may be older than the child you buy it for. Nine years after its commercial release, Minecraft remains the ultimate sandbox, where a player can make buildings, sculpt landscapes, dig dungeons, craft items, build cities, and really challenge and defy the imagination. Not only is Minecraft appropriate for kids, we would say that it is a godsend for kids. Minecraft goes on a short list of the most important games of all time, and it is widely available for countless game systems — there are even phone versions.