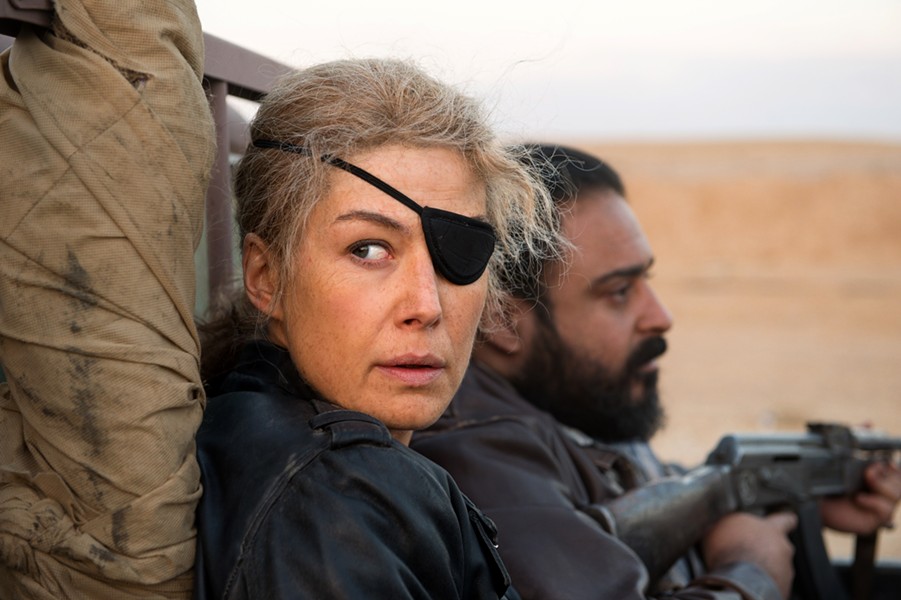 A Private War takes a stripped-down, no-nonsense, sobering approach to the war correspondent subgenre with the mostly true story of the late Marie Colvin, a London Sunday Times reporter and longtime front-line witness to armed conflicts. In director Matthew Heineman’s narrative summing up the writer’s career — screenplay by Arash Amel, from a Vanity Fair article by Marie Brenner — the well-traveled Colvin, played with maximum realism by Rosamund Pike, seemingly can never get enough danger to satisfy her.

In Sri Lanka with the Tamil Tigers, she loses the sight in one eye. In Fallujah, she’s there when the mass graves of Saddam’s victims are opened up. Baghdad’s Green Zone, IEDs in Afghanistan, Gadafi’s last stand in Libya, the Syria-Iraq border — Colvin relentlessly seeks heat in search of her perennial angle, the human cost of battle. It takes a special person to do that. As her editor (Tom Hollander) admiringly tells her, “You have a god-given talent to make people stop and care.” Her mission is to look into the faces of dazed individuals and learn their stories, no matter the cost to her.

All this derring-do proves self-destructive but Colvin pretends not to notice, except for one quiet evening in a room somewhere when she examines her body in a full-length mirror, fully nude. Cigarettes and alcohol help her cope from one scene of strife to another, but the emotional toll is just as pronounced as the physical. Pike, an actress evidently destined for stressful roles in the center of violence (Gone
Girl, Hostiles, Beirut), portrays Colvin as the most driven, obsessed, socially committed teller of truths we could ever imagine. It’s fatiguing just to watch her. When a character’s routine is so hectic that the comic relief is to smoke a joint and have sex with Stanley Tucci (as boyfriend Tony Shaw), the situation is pretty grim indeed.

We learn a few tricks of the trade. Cellphones bring missiles. It’s infinitely more convenient to be a broadcast video correspondent than a newspaper stringer (“Print, back of the hangar!”). Occupational burnout is a given if you’ve seen too many casualties. But Pike’s Colvin is determined, and she does it her way. A Private War is recommended.