A Parcel for the People?

A growing number of Eastlake neighbors are opposing plans to sell a city-owned parcel to a developer that wants to build a 24-story luxury apartment tower. The developer also has a history of not paying its debts. 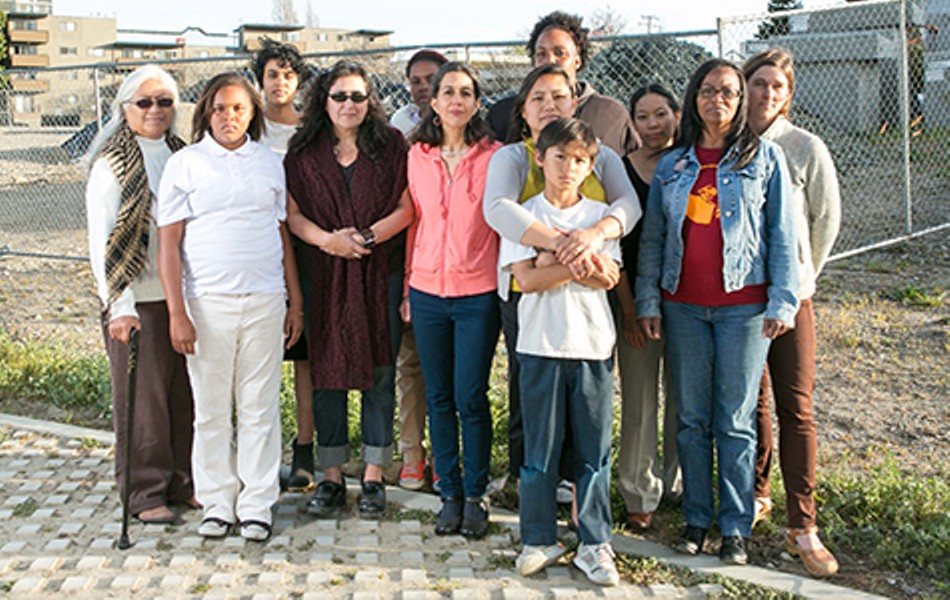 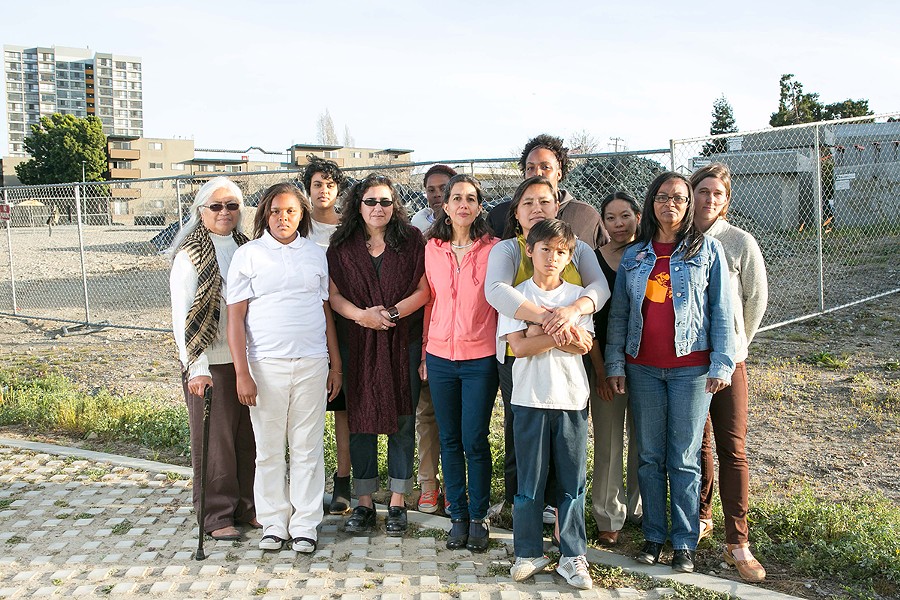 Bert Johnson Monica Garcia (center), a resident of the neighborhood where the planned development would be says, "Our neighborhood is undergoing a lot of pressure."

A proposal by the City of Oakland to sell prime public land along the edge of Lake Merritt to a private developer who wants to build a market-rate apartment tower is sparking controversy as the city's affordability crisis intensifies. Critics of the $4.6 million deal with developer UrbanCore, LLC say the proposed sale has been secretive and flawed. In addition, documents obtained by the Express reveal that UrbanCore's top officials stiffed the City and County of San Francisco out of at least $2 million in unpaid debts that were supposed to help finance affordable housing.

In Oakland, Urban Core is proposing to build a 24-story, 298-unit, market-rate unit apartment tower on public land on East 12th Street between 1st and 2nd avenues. Just under one acre in size, the site was created in 2013 when the city realigned East 12th, using Measure DD funds. In anticipation of the street realignment, UrbanCore and two other developers quietly approached the city in early 2012, seeking permission to build on the new site. Then, during a closed-door meeting in December of 2012, the Oakland City Council decided to privately solicit bids from only those three developers. City officials then selected UrbanCore's proposal to buy the land for $4,569,500, and signed an exclusive negotiating agreement with the developer. The city, however, hasn't yet sold the parcel. The Planning Commission is expected to vote on the project on April 1.

Critics maintain that Oakland shouldn't be selling publicly owned land to build market rate housing at a time when many longtime residents can no longer afford to live here. Instead, they want a project that will include housing for low-income residents, and other community benefits.

Last week, the Planning Commission was scheduled to hear from the developer and members of the public, and to vote on the project, but the commission instead was forced to reschedule the hearing, because three commissioners recused themselves from voting, and another commissioner was absent, thereby preventing a quorum at the meeting. Commissioner Chris Patillo's company PGADesign is a subcontractor for UrbanCore on the tower project. Last year, Commissioner Adhi Nagraj's company, Bridge Housing, expressed interest in developing adjacent parcels of land owned by the Oakland Unified School District. Bridge Housing has also partnered with UrbanCore on previous projects. Commissioner Jahaziel Bonilla lives across the street from the proposed site. All three therefore have a financial interest in properties within 500 feet of the project, thus triggering a state law that requires them to recuse themselves from voting on it.

According to UrbanCore and Oakland's Planning and Building Department, the Lake Merritt tower project can't include affordable units because the cost of construction is too high. A representative for UrbanCore also argued that Oaklanders shouldn't be worried about the building's high rents, because adding 298 apartments to Oakland's stock of housing will take demand pressure off the city's tight rental market.

A market survey conducted for UrbanCore in 2013 by the Riverstone Residential Group, and made public by the city, put the rental price for a one-bedroom apartment in the tower at $3,150 a month, making the units affordable to households with $113,000 or more in yearly income. The median yearly household income in the 94606 zip code (which roughly encompasses Eastlake) is $38,363, according to the US Census as of 2013.

Ronnie Turner, a consultant working with UrbanCore, said the company has a history of creating and developing affordable housing, but said that "this particular site was designated more from the perspective of leveraging private capital for Oakland." Turner said that because the project isn't receiving tax credits used to pay for affordable housing, the tower can only be financially viable with market rate units.

"To relax demand on the existing housing stock you need to have a good piece of market rate development to take on those folks who want to live there, who have the means — otherwise they're going to put a squeeze on the existing housing stock," said Turner. "We're trying to ease that by having market rate development come to town."

UrbanCore's CEO, Michael Johnson, declined a request for an interview for this report, but issued a statement about the Lake Merritt tower project emphasizing its benefits to Oakland's economy, including "the creation of over 400 construction and permanent jobs," and "significant property taxes annually." He added that "the developer has conducted an extensive community participation process over the last two years to gain input into the project."

However, many neighborhood residents say they only heard about the apartment tower a few months ago. "We're very civically engaged — for us not to have heard about this project is very concerning," said Mari Rose Taruc, a seventeen-year resident of the Eastlake neighborhood and member of East Lake United for Justice, a neighborhood organization that wants the city to use the parcel for affordable housing. Taruc said she only became aware of the proposed project in December.

"What we're seeing in our neighborhood, and across Oakland, is that there are development plans to provide housing for more affluent folks," said Taruc. "But there are no plans for lower income people." Taruc noted that with the loss of redevelopment funds from the state, and the financial squeeze the Great Recession put on the city, Oakland has fewer resources now to build affordable housing. "That's why this development is so important for us, because it's public land, and one of the few places we can assert that public good should come first."

"Our neighborhood is undergoing a lot of pressure," added Monica Garcia, who lives a block and a half from the project site and is a twelve-year resident of Eastlake. "People have started moving into the neighborhood who can pay a lot more rent than people who have traditionally lived here, and when you build a new building like this that's designed to attract more affluent people to the neighborhood it will create a cascade effect [that] will continue to drive up the rents higher and higher."

Garcia said she first heard about the proposed tower two months ago from a neighbor's Facebook post. "The process by which this land sale was proposed and the developer was selected is highly suspect," said Garcia. "The developer said they held some community meetings, but they didn't send out notices to people as close as a block away."

A letter sent by Jeffrey Levin of East Bay Housing Organizations to Neil Gray of Oakland's bureau of planning on March 17 makes similar points. "We are concerned that this project sets an unfortunate precedent of giving away land value [...] without leveraging public land as one of the City's few remaining strong tools to facilitate the creation of much-needed affordable housing," wrote Levin.

Oakland Redevelopment Program Manager Patrick Lane said that "when a developer offers a market-rate price for the land, we put fewer conditions on what they can do with it than we would if we sell it for less than market rate." According to Lane, one reason for selling the land at a higher price with few strings attached is that UrbanCore ultimately wants to sell off the apartments as condos. "It's hard to do condo projects on leased land," explained Lane. "This is ultimately a condo project, although they're planning on renting for a while."

According to city records, another reason for selling the land at market value, rather than selling or leasing it in a way to subsidize affordable housing, is to fill a $4 million gap in Oakland's city budget. "It is planning staff's understanding that the City is maximizing the price of the land for budgetary reasons," wrote planning department staffers in a March 18 report. "The City's 2013-15 Budget, approved in June of 2013, included $4 million in land sale proceeds and the only available property held by the City that could generate sufficient proceeds is the project site."

But Taruc argues that the city "should not be balancing the budget on the backs of poor people, and selling off public land so the rich can benefit."

Added to this growing public opposition are questions about UrbanCore's inability or refusal to repay money it owes the City and County of San Francisco. Public records show that San Francisco officials have accused UrbanCore officials of undermining the city's affordable housing goals because they have failed to repay a $5.5 million construction loan from 2010. The loan was made to Fillmore Development Commercial, LLC, a company controlled by UrbanCore's CEO Johnson, to redevelop property in San Francisco's Fillmore district.

According to a February 20, 2015 letter sent by Olson Lee, the director of the San Francisco Mayor's Office of Housing and Community Development to Johnson, the Fillmore Development Commercial company failed to make loan payments to the city for eight months in 2010. The city and Johnson then agreed to a payment plan that would have allowed Johnson's company to repay the loan by August 2013, but Johnson's firm only made 9 of the 36 required payments.

"[The city] agreed to this work-out plan in good faith in recognition of a challenging economic climate and was led to believe that the Project's tenants had gotten behind on their payments," wrote Lee. "Subsequent information has shown that the tenants were making timely rent payments but the Borrower [Fillmore Development Corporation] got behind in passing along those revenues to service the debt." As of last month, Johnson's company was 27 months behind in making its loan payments, which total $1.59 million and an additional $498,000 in interest and penalties.

Olson's letter concluded that Johnson's "failure to pay amounts due under the Loan results in a direct loss of [federal Community Development Block Grant] funds that the City's nonprofit community relies on to serve low-income communities."

In email to the Express, Benjamin McCloskey, the deputy director of the Mayor's Office of Housing and Community Development, wrote: "The default has not been cured and we are in ongoing negotiations with the partnership."