A Night in the Park With Spider-Man

Outdoor movie series have proliferated across the East Bay. 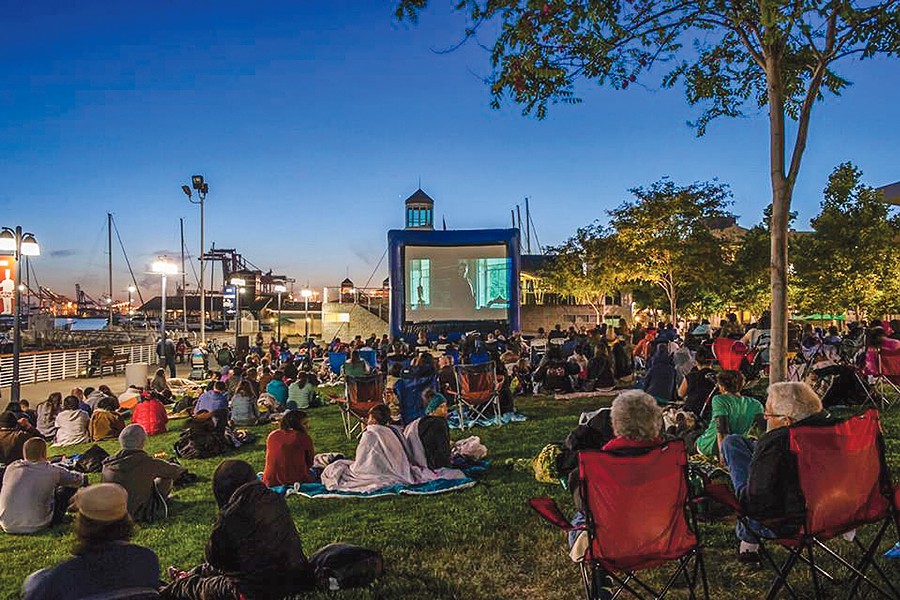 Waterfront Flicks at Jack London Square Every other Thursday, catch a free outdoor movie screening on the Ferry Lawn at Jack London Square. The schedule, which stretches from the end of June until early September, includes several major Hollywood hits from 2018, including Crazy Rich Asians, A Star is Born, and Bohemian Rhapsody as well as a few family-friendly offerings such as Black Panther, Spider-Man: Into the Spider-Verse, and Mary Poppins Returns. Grab a bite to eat at one of the many eateries in the square before the show starts, or opt for take-out and a blanket for a pre-movie picnic. Movies begin at sundown, but arrive early for festivities like giveaways, sweet treats from the Ben & Jerry's mobile cart, and trivia. Added bonus: many restaurants in Jack London offer specials on Waterfront Flick Thursdays. Thursdays, 6:00 p.m. free, Jack London Square Ferry Lawn, 10 Clay St., Oakland, 510-645-9292, JackLondonSquare.com.

Movies in the Park in Berkeley "It wins with its nano-second sharp timing and percussive rat-a-tatting of panels and split screens that make the action and visual gags feel jumpy and alive," says Emily Yoshida for Vulture on Spider-Man: Into the Spider-Verse. Marvel's commercial and critical hit took the Best Animated Feature Film at this year's Academy Awards and is widely heralded as the best entry yet into the Spider-Man extended universe. If you missed it the first time around, this summer is the perfect time to catch up. The City of Berkeley will be hosting a free outdoor screening of the film in Willard Park, along with a handful of other critically acclaimed animated features in various parks in Berkeley throughout the summer. Check out the complete schedule of showings and locations on the city's webpage. Various dates and times, free, various locations, 510-981-6700, CityOfBerkeley.info.

West Wind Solano Drive-In A list of outdoor film screenings in the East Bay can hardly be complete without the West Wind Solano Drive-In in Concord. Family operated since 1952, the West Wind Drive-In delivers all of the charm of the American tradition of drive-ins with a few modern upgrades, including digital projector imaging and audio accessible from FM radio. Guests are welcome to bring their own food, but in case you can't recreate movie-theater quality popcorn from your home, West Wind has a concession stand that offers all of your favorite snacking staples. The most enticing perk of the drive-in yet is the price. For $8 per person, (and a fraction of that for children) guests can enjoy a double feature of contemporary releases. Tickets are sold exclusively at the box office at a first-come-first-serve basis, so Solano recommends that movie-goers arrive early. Various dates and times, $1.75-8, West Wind Solano Drive-In, 1611 Solano Way, Concord, 925-825-1951, WestWindDi.com.

The Great Wall of Oakland Longtime East Bay residents are well acquainted with Oakland's Art Murmur, but the Great Wall of Oakland, despite its grandiose name, maybe less so. The small namesake nonprofit behind this installation projects digital art and film on a 100' by 100' wall on the corner of Broadway and West Grand Avenue. The Great Wall of Oakland partners with various art organizations to adapt the work of a wide array of artists — filmmakers, photographers, musicians, poets, and more — into interactive installations and experiences for audience members. Programs are typically organized around a broad theme such as "distance," "city spaces," and "surveillance technology." The most recent event, titled "On the Road," featured short documentaries and photography that displayed and critiqued the changing landscapes of Oakland. Check out The Great Wall every first Friday at Oakland's Art Murmur. First Fridays, 7:00 p.m., free, 2201 Broadway, Oakland, OaklandArtMurmur.org.

Starlight Movies in the Park in Alameda Every year, the Alameda Recreation and Park Department does an excellent job of lining up summer activities for its residents, offering a huge variety of camps, classes, walks, and tours to keep family members of all ages busy during the day. Three dates a summer, they also have nighttime entertainment covered. Parents can mix it up by taking their kids to enjoy Trolls, Zootopia, and Ralph Breaks the Internet for free under the stars at Leydecker Field. In place of previews, the Parks Department will host games and crafts beginning at 6:30 p.m. Snacks and food will be available for purchase, and all proceeds will be donated to the Alameda Youth Committee and Teen Programs. Various dates, 8:15p.m., free, Leydecker Park, 3225 Mecartney Road, Alameda, 510-521-1266, AlamedaCA.gov.

It's Only Rock 'n' Roll at BAMPFA Summertime in the Bay Area is rife with music festivals. BAMPFA is paying homage to the time-honored summer tradition of live outdoor music performances with free screenings of three of the most celebrated rockumentaries in film history: Jonathan Demme's Stop Making Sense, Richard Lester's A Hard Day's Night, and D.A. Pennebaker's Monterey Pop. These films, capturing the music of The Talking Heads; The Beatles; and legendary Monterey Pop festival acts such as Otis Redding, the Mamas and the Papas, and Jimi Hendrix, will be displayed on the museum's massive outdoor LED screen located on the corner of Addison and Oxford. The three screenings are part of a much larger film series hosted in BAMPFA's Barbro Osher Theater called "It's Only Rock 'n' Roll," which aims to explore "music's contradictory potentials, balancing rock's capacity for utopian popular cultural empowerment with its usefulness within the capitalist media industries." Various dates, 7 p.m., free, Berkeley Art Museum and Pacific Film Archive, 2155 Center St., Berkeley, 510-642-0808, BAMPFA.org.

Free Family-Friendly Movies in the Park Gone are the days of the affordable movie night out with the entire family. For busy parents, local Parks and Recreation departments can be a godsend. Several other East Bay cities including Danville, Hayward, Hercules, Orinda, Walnut Creek, and more zone off city parks a handful of evenings each summer for free showings of PG and G rated films. Bring a blanket and fold out chairs for a relaxing evening alongside neighbors. Check your city's website for details about movie showings. Various dates and times, free, various locations.