'A Modern Day Ruin': A Writer On His Visits to the Ghost Ship Site

The neighborhood also has now become a place of pilgrimage. 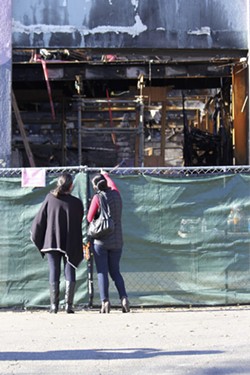 The Wendy’s parking lot
across the street from the Ghost Ship warehouse is where people sit in their cars and stare at the massiveness of the tragedy. They can see the whole building from there, clearly and unobstructed. Those people might be family and friends of the victims, or maybe just concerned citizens. No one is there for fast-food. All probably wonder why 36 human beings had to die.

I’ve visited the site near 31st Avenue and International Boulevard in Fruitvale a few times since the blaze. Today, it feels like a modern-day ruin. Back in December, people constantly gathered outside the warehouse, respecting a “Do Not Enter” sign, peeking over a green fence, pointing, praying, gazing at the building in disbelief.

Each year, Fruitvale’s Day of the Dead procession marches by the exact same location of the warehouse — people’s faces painted in white, with hints of black and red, looking like skeletons. These days, it’s hard to escape the many reminders of death in the The Fruitvale. The killing of Oscar Grant happened only blocks away from Ghost Ship, at the BART station. And even now, months after the fire, there are memorials and flowers scattered around the warehouse. I saw a man sneak chocolates off of an altar at East 12th and 31st avenues. He ate them, no apparent shame on his part.

The neighborhood also has now become a place of pilgrimage. Visitors leave behind gifts for the departed — then, later, they are secretly pilfered, as needed, by those trying to survive on the streets. Security guards sit in cars, hidden, waiting for people to try and hop the green fence, or even just touch it. At one point during a visit in December, I got too close to the fence with my camera, and a guard grunted at me. I walked over toward him, but he forgot that his teeth were out. He quickly placed them back in his mouth, so as to speak, and I sheepishly pretended like I didn’t notice.

“Where are you from?” he asked. I told him I’m local, from Oakland. “You know what this is, right?” he said while pointing at the warehouse. “Gentrification.”

I don’t go there. But I agree that the pressure to live in an unsafe space, because you can’t afford anywhere else in the Bay Area these days, is tragic — and worthy of serious discussion.

An older, stout lady with short grayish hair under a tightly fitted baseball cap approached and touched me twice on the arm, in a consoling manner. “Why couldn’t they just jump out the windows?” she asked, looking like she forced herself out of bed, still dazed by the news. She told me she didn’t know any of the victims, but it felt like she did. “Where’s the stairwell?” she asked. I stood there with her, trying to imagine where the staircase was, but only seeing a melted black mass.

I keep thinking about things like entertainment permits and lower rents in the Bay Area. It’s been two months since the fire, but these problems remain unsolved. Meanwhile, local governments will continue to crack down on unpermitted living, and rich developers will use Ghost Ship as a talking point for why they should be allowed to turn all of Oakland into one big luxury condo — complete with high-tech sprinkler systems.

Near the end of one of my visits, gospel music wailed from an older mini-van in the Wendy’s parking lot, speakers lifting the sounds faithfully down the block. Despite everything, there was a feeling of community at the warehouse. Some people even say they want the Ghost Ship facade to remain as a kind memorial for the victims. Others in this city want to move on, in silence, like ghosts in the night.

Damu Dailey is a writer, documentarian, and contributor at OaklandVoices.us, where a version of this essay originally appeared.