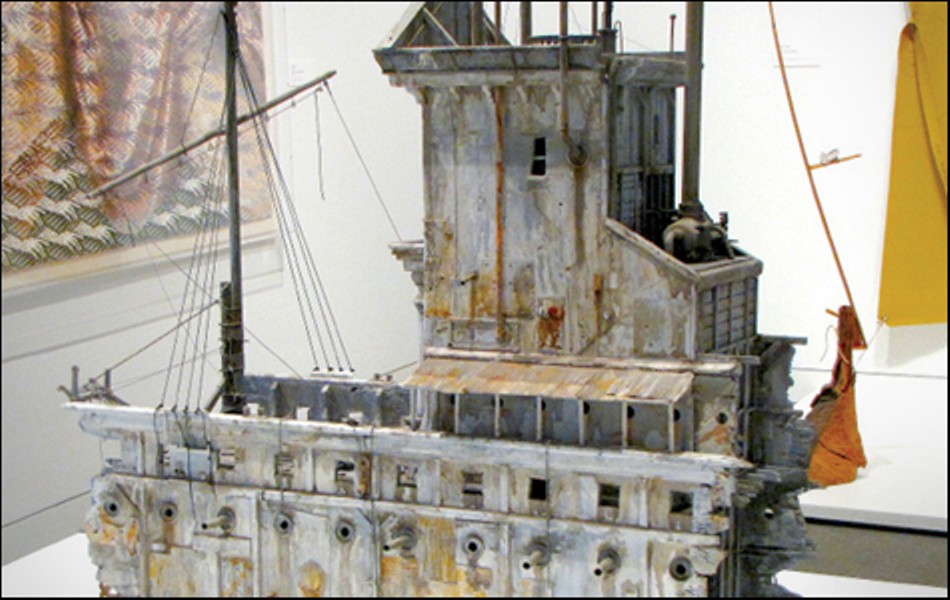 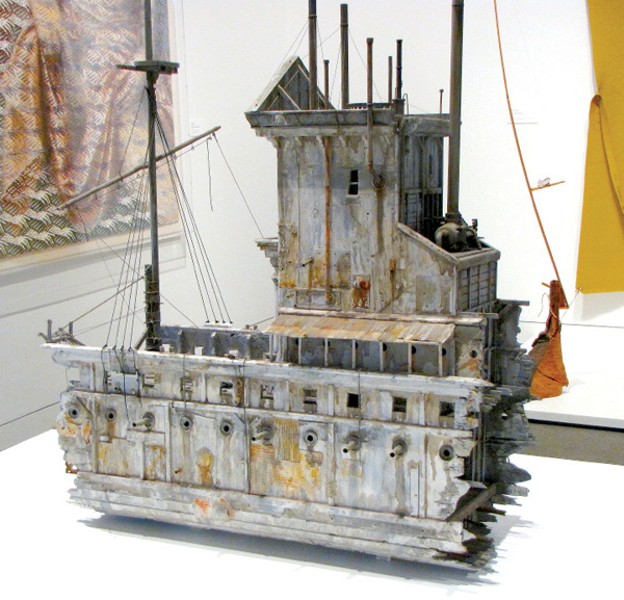 The junk-based assemblage/collage tradition dates back to German Dadaist Kurt Schwitters a century ago, but it took off in mid-century America, evolving into sculpture/painting hybrids and installation as artworks increasingly engulfed viewers/participants. Ed Kienholz's theatrical tableaux savaging Cold War paranoia are worthy, if publicly-directed, descendants of Schwitters' congestively bedecked Merzbau man-caves. Los Angeles sculptor Michael C. McMillen, born in 1946, was younger than the Ferus Gallery circle of artists, including Kienholz (well profiled in Morgan Neville's film The Cool School), but Michael C. McMillen: Train of Thought at the Oakland Museum of California shows that the roadside-museum aesthetic of Junkboy — it's his self-mocking persona — has art-historical legs. Retiring curator Phil Linhares, a longtime McMillen fan and friend, has selected nearly seventy pieces that reveal the artist's quirky humor and stunning craftsmanship. (As a boy, McMillen was friends with a Frankenstein special-effects "theatrical magician" and has himself worked in set design for such films as Blade Runner and Close Encounters of the Third Kind.) McMillen's dilapidated but psychically charged stage sets with their peephole glimpses into oddball miniature worlds strike a plangent, nostalgic, but also hilarious chord.

While this is a large show, featuring four decades' worth of drawings, paintings, sculptures, installation, and films, it doesn't overpower, partly due to the dispersion of the works among the permanent collection — there is a treasure map for the goal-directed — and partly because of the works' witty variations in form and materials. Some highlights: very short humorous films made from found footage that reward repeated viewings despite their brevity; "The Box of All Knowledge," a sealed footlocker of undisclosed "contents"; "Picasso's Last Words," an empty wine bottle presumably preserving 21g of Mougins air and soul; "Train of Thought," a railroad trestle emerging from a wall-mounted tunnel that stops in midair, dropping an occasional alphabet pasta letter into a semiological pile below; the Rube Goldberg pinball apparatus of "Deliverance," delivering a bean through a straw onto a dinner plate; a Cornellian array of unprepossessing household junk, "Museum of Wax, Strings and Springs"; "The Raft of History," a fragment of combined sailing man-of-war and Victorian house; and "Pavilion of Rain" and "Red Trailer Motel," evocative walk-in stage sets of derelict buildings — "time markers" — the latter replete with summer-night sound effects and vistas into seedy interiors. Catalog available. Michael C. McMillen: Train of Thought runs through August 14 at Oakland Museum of California (1000 Oak St., Oakland). 510-238-2200 or MuseumCa.org