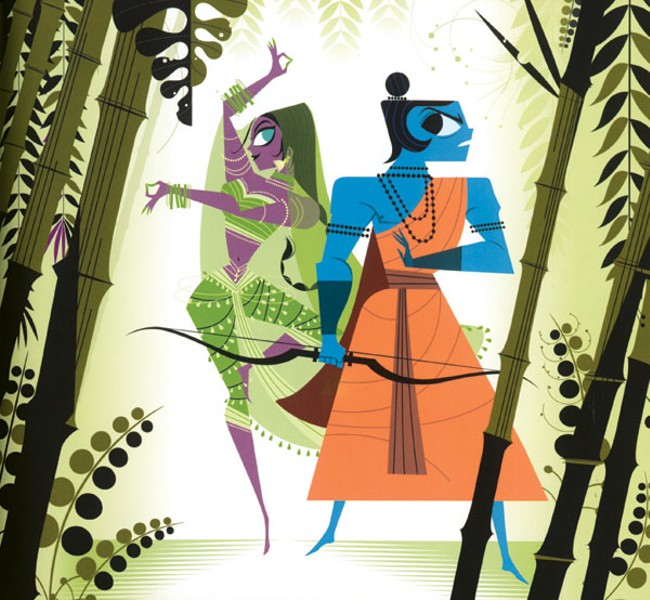 An illustration from Ramayana: Divine Loophole, by Sanjay Patel. 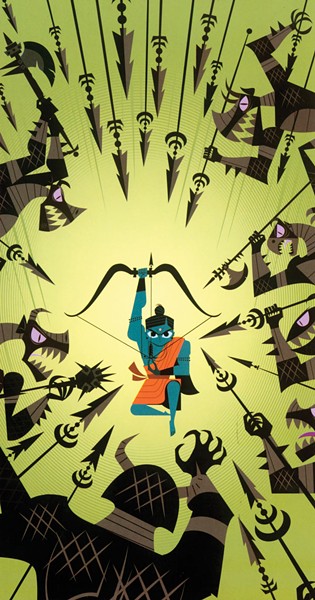 Pixar animator Sanjay Patel grew up in San Bernardino, where his parents own the Lido Motel right off Route 66. He fit the SoCal stereotype to a T. As a kid, Patel loved hot rods, skateboards, and Japanese animation. He avidly watched the TV show Knight Rider. He listened to punk rock and dark electronic music, and wanted to be a surfer. Not surprisingly, he felt little connection to his parents' Hindu culture. "I had no desire to sit down on a mat and count prayer beads and chant a name that was meaningless to me," Patel said. It would take another couple decades for that aversion to become a fixation.

Seven years ago, Patel began treating his cultural lineage as a muse. By then he had worked at Pixar for seven years, and built an impressive portfolio. (It now includes Monsters, Inc., A Bug's Life, Ratatouille, The Incredibles, Up, and all the Toy Story sequels, plus a Bjork music video). His artistic style hovered somewhere between mid-century modern and manga. He actually didn't need the imprimatur of a big animation company, since his own illustrations were so one-of-a-kind. Patel emphasized geometric lines and blocky composition. He drew people with asymmetrical features and made all the pages bristle with color. ("Putting a pen to paper is like sex to me," he said. "I fucking love it.") It wasn't really the stuff of religious iconography, but Patel found something in Hindu mythology that resonated — even for a self-described agnostic. He liked its elaborate storylines and romantic intrigue. He liked that each deity had a distinct personality.

Not to mention that these religious icons were bleeding into the pop-culture landscape around him. For a while, Patel got heavy into trance music, and he saw a lot of flyers circulating with knockoff images of Vishnu or lotus flowers. "That caught my attention," he said. "My parents were Hindu, and I grew up in a house filled with Hindu iconography. ... Somehow trance was one of the gateways to me understanding the stuff that was in my house."

Patel is a lover of sharp edges, in everything from his drawings to his sartorial choices — last week he showed up to Pixar in black Converse, a leather jacket, and a Ramones T-shirt. He characterizes himself as an art school drop-out — short-hand for someone who would rather operate on instinct, than follow a rubric. But he could easily transmogrify his style into something more ornate and painterly, if the occasion called.

Initially, he just wanted to make a poster of Hindu deities. Then he thought of turning the poster into a place mat and handing it out to Indian restaurants on University Avenue. Then he decided to make a full-fledged book of icons, at the behest of some friends who really dug his work. Patel self-published the first iteration, called Little India, and made a web site to go with it. The book caught on in the blogosphere and eventually got the attention of a literary agent from Plume, a division of Penguin. With the help of editor Emily Haynes, Patel transformed Little India into a larger picture book called The Little Book of Hindu Deities. Then he was ready to take on a more ambitious project. His new book — published by San Francisco-based Chronicle Books — offers a contemporary reimagining of Ramayana, the great Sanskrit epic. He said it was tantamount to illustrating the Bible.

"From day one, I kept trying to make the illustrations in the story really cute and simple," said the 35-year-old artist, who has a ground floor office in Pixar with swivel chairs and Charlie Harper wallpaper. "I just kept trying to make it cute, cute, cute, and the story is anything but that. It's really dramatic, it's really violent, people fucking die." "Cute" actually worked in Patel's first book, for which he adopted a Sanrio graphic style, drawing the characters in pastel yellows and baby blues, with pencil-line mouths and disproportionately big eyes. Ramayana required a different approach, he said: Strong lines, bold patterns, everything flat and punchy. He poached elements from monographic design and Indian sculpture, as well as modern 2-D animation. "It was like, 'How do I take something that in India has been made in a full, decorative way, and strip it down to its essence?'"

Patel actually spent a full year reading different versions of the Ramayana before creating his own. For the most part, he doesn't like reading, and he never enjoyed the canonical literature that was foisted on him in high school. "Like Canterbury Tales," Patel said. "Stuff that you're forced to read that just absolutely has no connection to you." But the Ramayana spoke to him in a different way. Over seven volumes, it detailed all the major events in the life of Rama, who is considered a terrestrial avatar of the god Vishnu. Like any epic tale, it's full of sex and death, long exiles, horrible betrayals, and small miracles that become cataclysmic. "Even if you just read my version, it's a very tragic story, because everybody suffers, everybody gets separated, only at the very end is there a modicum of happiness," Patel said. "If you read the full version, everybody dies. It's like Greek tragedy."

Patel's own version, called Ramayana: Divine Loophole, is both a children's book and a graphic novel. It gets all the juice of the original story and crowds it with visual detail. In this version, Prince Rama is a warrior with electric-blue skin, dispatched to fight off the evil, ten-headed villain Ravana. He's got a lover, Sita, who would walk through fire to prove her honor. He's got divine powers. And he's got haters. In chapter 2, Prince Rama is exiled by his stepmother and sent to the jungle for fourteen years. That part was the most fun to draw, said Patel, whose jungle landscapes are thick and green, often suggesting extension beyond the page. It's as though Alice suddenly got teleported through the looking glass.

Such elements fit Patel's sensibility. He's into loaded themes, knotty story lines, and the subconscious. He believes in Myers-Briggs personality types. He says one of the reasons he has stayed with Pixar so long was that his colleagues there also want to bring adult content into the animated domain. "Their chief priority is not to talk down to anybody, not to talk up to anybody," said Patel. "They make movies for themselves. In a movie like Up, for instance, there's some really dark and dramatic themes there. That's what we want to see. ... It's like, we're so sick and fucking tired of talking, dancing animals. We want like, some real emotion, goddamnit." He continued: "I'm very much cut from their cloth."

Patel may gravitate to serious, substantive themes, but his tone in Ramayana is light and personable, almost to the point of being tongue-in-cheek. (The story begins: "Since this is an epic story, let's start with the most scandalous of characters: the bad guy.") That sort of makes sense, because the Ramayana was an oral history to begin with (supposedly, a god sang the original version to a murderer). It also befits Patel's personality, since there's no disconnect between his writing voice and his speaking voice. He said it took several edits to find the right balance of charm and snark. He wanted to mollify young readers, but he also sought out adults — particularly folks like him, who grew up resisting Bollywood music and Mira Nair films, and have little motivation to read a seven-volume Hindu epic. "There are people like me who are adults who have never read the story," said Patel. "We need to come to it in a way that's very visual. Almost like a children's book."