If you don’t think bicycles and coffee go together, you probably haven’t spent much time with serious cyclists. As Oakland resident and aspiring coffee shop owner Jane Woodman put it, “That’s what cyclists do. They stop at a coffee shop.”

Inspired by the culture of “velo cafes,” which she said are especially popular in London, Woodman plans to open a cafe in Oakland’s Redwood Heights neighborhood that will combine three of her biggest passions: coffee, cycling, and music.


Woodman hopes to raise $50,000 through the crowdfunding site Indiegogo to make the proposed cafe, which she’s dubbed The Universal Bistro (4174 35th Ave.), a reality.

“It’s a lofty goal, but I don’t think it’s impossible,” she said.

Woodman explained that The Universal sits in the middle of a stretch of Redwood Road and 35th Avenue that’s popular with cyclists, who treat the long downhill descent as their reward at the end of a ride through the hills of Oakland’s Redwood Regional Park area.

According to Woodman, the location is perfect in more ways than one: While Redwood Heights is bookended by two coffee shops, neither is within walking distance of the neighborhood’s main residential section, as hers will be. And since Montclair’s lone bike shop, Wheels of Justice Cyclery, closed recently, cyclists in the Oakland Hills haven’t had a place to call their own.

The proposed site of the cafe is a former dry cleaning business, and space is limited to just 735 square feet. But Woodman plans to squeeze a lot into those tight quarters: indoor seating for about fifty customers, an area for live music, and — most ambitiously — a small bicycle repair shop. There likely won’t be room to sell bicycles, but aside from that, Woodman hopes to offer most of the amenities of a full-service bike shop.

“You could buy tires. You could probably get a flat fixed. You could definitely get a tune-up,” Woodman explained.

For regular folks who just want their caffeinated beverage fix, Woodman said she’ll offer coffee from one of the Bay Area’s prominent roasters, and she already has a wholesale contract with Samovar, the San Francisco-based purveyor of “third wave tea.” Food options will probably be limited to baked goods from a local bakery. 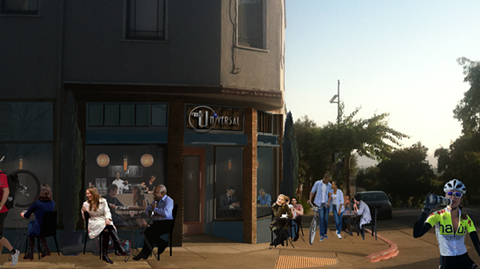 Woodman also plans to bring in a variety of live music — unamplified acoustic acts to not disturb neighbors in the apartment building upstairs.

Woodman herself is a professional musician who describes her chosen genre as "industrial shoegaze." So it’s fitting that the cafe’s name, The Universal, is a nod to the Blur song of that title. And it’s not difficult to imagine the cafe as a much happier repurposing of the song’s somewhat dystopian lyrics: “Yes, the Universal's here, here for everyone. Every paper that you read says tomorrow’s your lucky day. Well, [East Bay coffee and bicycling enthusiasts,] here’s your lucky day.”

If all goes smoothly, The Universal Bistro will open in the spring of 2015.