A Beat-Down at Alameda City Hall 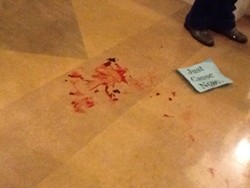 About thirty minutes before the start of the scheduled 6 p.m. special meeting on rent increases in Alameda on Wednesday, John Klein, a prominent member of the Alameda Renters Coalition, stood just outside the city council chambers looking a bit concerned. Inside, most of the 150 or more seats in the chamber had been taken by people he assumed were landlords instructed to arrive early in order to relegate renters to viewing areas downstairs and across the street at the public library. In fact, the early showing of visitors was notable, especially for an earlier than normal, mid-week meeting. Later, when the first few batches of public speakers all described themselves as landlords, it became increasingly clear that Klein’s assumption that it was the landlord’s strategy to pack the council chambers was correct. The pre-meeting move by landlords to squeeze out renters set the tone for a night that eventually featured the highly unusual sight in Alameda of demonstrating activists demanding entrance to City Hall and the arrest of Klein and another renters’ advocate, who was violently thrown to the ground by an Alameda police officer.

A photo I took of the blood-smeared floor instantly enraged people on social media. Police claim that the man they slammed to floor had assaulted an officer, but it was unclear whether that true. I witnessed the incident first-hand, standing just feet away from where the man — who looked like he was in his sixties — was roughly subdued by the officer and then handcuffed. The man was also later charged with resisting arrest.


What led to the conflict was a desire by the Alameda Renters Coalition, a relatively new, but increasingly effective grassroots organization on the island, to enter the council chambers. The coalition was initially formed as a way for Alameda renters to vent and be consoled by others about exorbitant rent increases on the island. In recent months, the group has taken a far more aggressive political advocacy position, and in many ways, has succeeded in grabbing the attention of the city council, which has spent most of the past year doing relatively little to help renters despite a litany of horror stories of 50 percent rent increases and abrupt 60-day eviction notices. Most observers credit the coalition with applying the political pressure that led to the 65-day moratorium on rent increases and evictions approved by the council early Thursday.

But after more than ninety minutes of testimony Wednesday evening dominated by landlords, the coalition’s leaders decided to change course. Many who held signs that read, “I’m a renter and I vote” and “Rent Control Now” began to gather in the narrow hallway leading to the council chambers. They began rhythmically chanting, “Moratorium now!” and “Let us speak!” Some then began pounding their fists on a table and pillars.

Alameda Public Works Director Bob Haun had spent most of the evening regulating how many people were allowed in the chambers, according to the fire code. As the growing throng began to show an intention to enter the chambers, Haun could be seen on video blocking the entrance. Witnesses from inside told me they were unclear how Haun later fell to the ground. The incident caused the mayor to briefly halt the council meeting. Other video shows Haun possibly pushing the renter — who would later be injured by police — to the floor. However, it’s unclear whether the prone renter took Haun’s legs from under him or whether the city employee merely slipped. A photo later showed Haun slumped against the door, his thumb bloodied. A city councilmember later told me Haun had broken his hip in the fall. 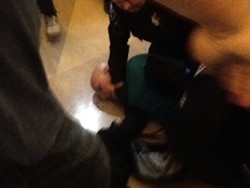 From my vantage point, it became evident that the lone officer at the chamber’s door had called for additional police following Haun’s fall. Moments later, two officers calmly climbed the stairs behind me and made their way through the crowd. The renter who had previously fallen to the ground had melted back into the crowd, but as the two additional cops passed him, he began to loudly scream at one officer, “Why! Why! Why!” After a pause, one of the officers grabbed the renter and pushed him through the crowd, but the renter did not immediately submit. In the scuffle, police pushed the renter against a row of older women before throwing him to the ground. It appeared that the renter’s nose was bleeding, because blood had smeared across the entire left side of his face. Some witnesses told me they believed the renter had a gash above one of his eyes. At least two young children witnessed the incident, including a young boy who stood next to me with his mother. He stared confusingly at the man whimpering on the floor with police on top of him. His mother, equally distraught, momentarily forgot to shield the boy from the violence before walking him away.

Once handcuffed and brought to his feet, the renter was escorted by police down two flights of stairs to the police station next door. The smeared blood was mopped up, but drops of blood remained on the stairs for much of the night.