For our 40th anniversary, we compiled a list of 40 of the Express' memorable in-depth reports and the topics we've loved writing about the most. 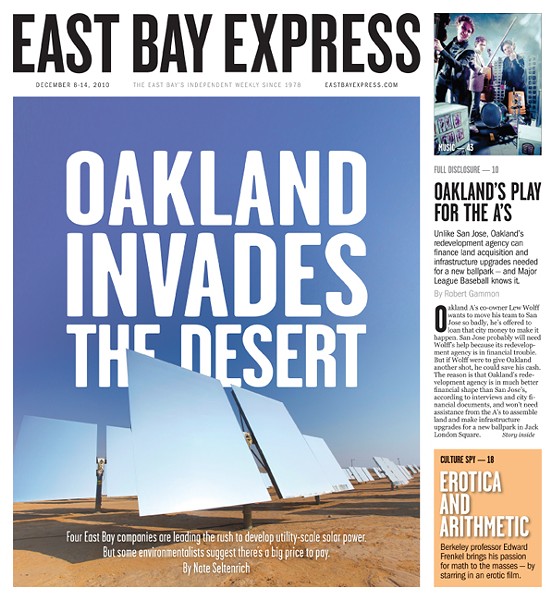 Local regulators in the pocket of the East Bay refineries that they're supposed to regulate? That's a proud local tradition of at least 35 years in these parts.

"Oakland is proud of its developing new image and the residents of Skid Row are not in the picture."

The Express also has a storied tradition of publishing in-depth, day-in-the-life or slice-of-life reports that provide readers with an up-close look of a piece of the East Bay that might be familiar — or unfamiliar.

One of the first was Dakota Lane's "On the Bus," in which she spent a week riding AC Transit's 51 line. On day six, she wrote, "Some nights, when there's nothing to see outside, the bus becomes a midnight cabaret."

J. Poet has chronicled the East Bay music scene and its trends for the Express for nearly as long as music critic Lee Hildebrand and film critic Kelly Vance. The subhed to Poet's 1985 cover story about a new music trend that began on Berkeley's Telegraph Avenue said it all: "They are local bands playing the East Bay circuit. They are young, musically eclectic, and politically conscious. They call their music 'World Beat,' and it may soon become the hottest thing in pop."

Similarly, we've covered the rise of hip-hop, hyphy, and numerous other musical genres.

We realize that it's an unpopular opinion, but we've implied it several times over the years: We don't really like zoos very much. To be blunt: Keeping animals in cages for the enjoyment of humans makes many of us queasy.

Now, Oakland Zoo has improved significantly since Robert Hurwitt detailed its severe problems in 1986. But three decades later, we were still questioning the zoo and its moves in "Zoo Gone Wild," by Sam Levin, Sept. 3, 2014.

Throughout the '80s and '90s, Oakland was not the center of East Bay political activism. Berkeley was. The streets of Oakland, in fact, were mostly quiet during those decades. Even the Rodney King police brutality case, which sparked repeated protests around the nation, barely registered in The Town.

Berkeley, however, was a different story, particularly concerning such issues as Cal's investment in anti-apartheid South Africa or its plans for People's Park. Protests back then seemed like a weekly occurrence, and the Express covered them in-depth.

Our first cover story package on the repeated protests was one of our best: a comprehensive look at the massive confrontation between demonstrators and Berkeley and UC Berkeley police.

Of course, we would do the same years later in Oakland during the Oscar Grant and Occupy Oakland demonstrations.

When we think of gentrification and displacement, we typically envision white artists, hipsters, or tech bros taking over neighborhoods of color. But over the past several decades, the East Bay, particularly Oakland, has experienced other types of demographic shifts, including new immigrants and refugees from war-torn countries changing formerly Black neighborhoods. The Express has been there to record many of these shifts.

Lonny Shavelson's 1987 cover story, "Mien Streets" was one of our first in-depth looks at the influx of Southeast Asian refugees into West Oakland: "The complexities of the process of immigration and assimilation are as difficult to understand as racism itself. But as Southeast Asian refugees move into previously black West Oakland, this intermittently volcanic process is rumbling again."

Documenting the many problems of Oakland schools and the district's attempts to find answers amid extreme bureaucratic and political dysfunction (not to mention, serious underfunding) has been another staple of Express cover stories over the decades. And some of our in-depth looks have been prescient: like Mike McGrath's piece on Oakland Tech under then new principal Dennis Chaconas. Many of the reforms Chaconas instituted are still in place today and are responsible for Tech's current reputation for being the best public high school in the city.