PETA president Ingrid Newkirk made the request in a letter to UCB Chancellor Carol Christ. 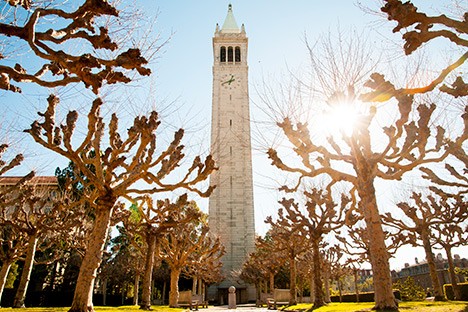 People for the Ethical Treatment of Animals sent UC Berkeley chancellor Carol Christ a letter today requesting permission to place a banner on the university's famous clocktower that reads "It's High Time We Went Vegan. PETA."

Signed by PETA president Ingrid Newkirk, the letter asks that the banner be hung "now, or if that’s not possible, when the campus reopens.

"It’s time to face the facts: The U.S. Centers for Disease Control and Prevention estimates that 75% of recently emerged infectious diseases in humans came from other species," the letter continues, as revealed in a press release. "SARS, which originated in bats, claimed 774 lives. Swine flu, or H1N1 — which originated in pigs — killed as many as 575,400 people. And the COVID-19 death toll has already surpassed 150,000.

"Zoonotic diseases aren’t limited to a single country or to wet markets — wherever animals are bred, intensively confined in their own filth, and slaughtered, humans risk creating another pandemic. In a paper published in 2018, Belgian spatial epidemiologist Marius Gilbert found that more 'conversion events' for bird flu—in which a not very pathogenic strain of the virus becomes more dangerous—had occurred in the U.S., Europe, and Australia than in China, where it originated."

Currently closed in accordance with the shelter-in-place order, Cal's 307-foot-tall, 61-bell Sather Tower — colloquially known as the Campanile — was opened to the public in 1916. Jazz pianist Herbie Hancock gave a concert on its chimes in 1968.

"We can’t turn back the clock, but anyone worried about the COVID-19 outbreak can adopt a vegan lifestyle to help prevent the next global pandemic. Consuming meat, eggs, and dairy has long been known to be unhealthy and completely unnecessary, and the current coronavirus crisis is just one more reason that we, as a society, need to ring the alarm. We look forward to hearing from you."
Prev
Next