The barbecue brick-and-mortar restaurant from chef and recent 'Chopped' winner Rashad Armstead opened Thursday in the Shops at Hilltop. 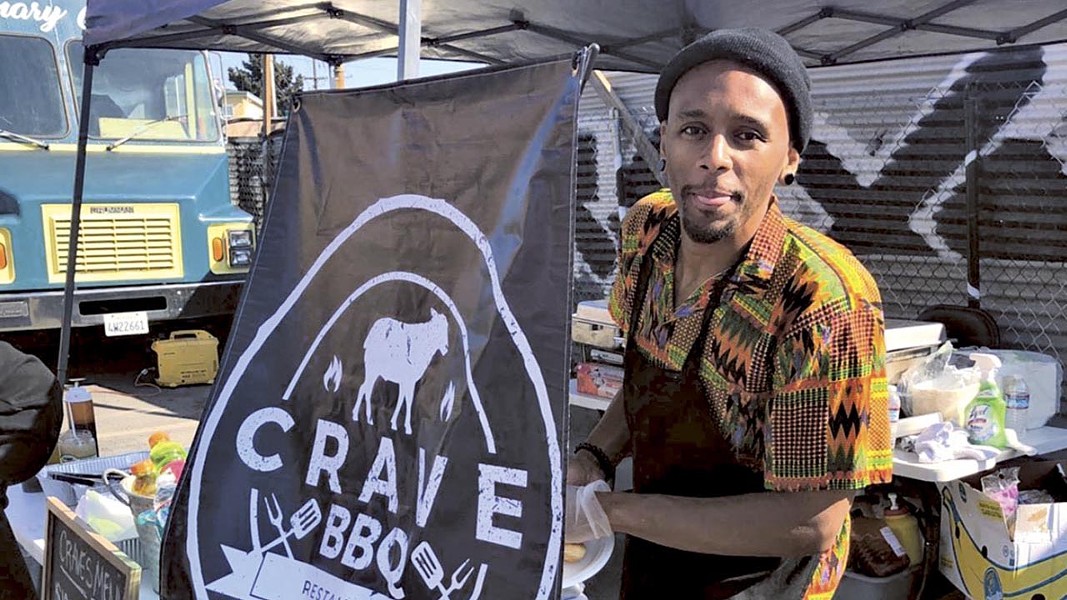 Crave BBQ is the newest brick-and-mortar restaurant from chef Rashad Armstead. During the past few years, the Bay Area chef has made a name for himself starting with a catering company called Artistic Taste 7. In 2017, he started a Crave BBQ pop-up that took place at a former gas station in West Oakland. Crave BBQ was originally supposed to take up permanent residence at the historic California Hotel on San Pablo Avenue in Oakland, but the financial costs to build out the space just weren't feasible. Undeterred, Armstead opened Grammie's Down Home Chicken & Seafood in May at 3817 Market St. in North Oakland, and the small takeout spot has already soared in popularity. And just a couple of weeks ago, Armstead gained nationwide attention after winning an episode of Chopped.

After the restaurant's first lunch service on Thursday, Armstead said the community has already come out to support the new restaurant.

"We got a lot of people who showed up who work at the mall and in the neighborhood," Armstead said. "They've been loving it."

Armstead describes his barbecue as "Southern style" — it draws from his family's roots in Louisiana, Texas, and Arkansas. He learned to barbecue from his father and great-uncle and uses a mixture of a spicy-sweet dry rub and a vinegar-based wet marinade on his meats. They're then slowly smoked over a wood fire: chicken for two to three hours, ribs for seven, and brisket for up to 17.

His side dishes are also based on family recipes. His potato salad is a variation on his great-grandmother Sarah Rawls' recipe. Rawls was a well-known Oakland restaurateur who also wrote four cookbooks and starred in her own cooking show; she's also the namesake of Grammie's Down Home Chicken & Seafood. According to Armstead, even Congresswoman Barbara Lee gave his potato salad — made with red potatoes, mustard, and sweet relish for a sweet-savory balance — a Texan stamp of approval. "She's like, 'Wow, this tastes just like I used to have back in Texas," Armstead said.

The opening day menu was short and sweet, limited to ribs, chicken, and hot links, plus baked beans and potato salad. Armstead plans to add brisket, collard greens, mac and cheese, and blue cornbread to the menu. For dessert, there'll be grilled peach cobbler, and to drink, there'll be berry lemonade and sweet tea. A beer and wine license is in the works. Armstead also likes to keep things interesting, so keep an eye out for more unusual items that'll be added to the menu in the future, like a hot link corn dog made with blue corn.

"I'm not afraid to take those same traditional flavors that we're used to, but just throw different things in there to kind of throw everybody off," he said.

But Crave BBQ is about more than just good food. At both of his restaurants, Armstead plans to employ young people so he can teach them the skills and work ethic required to work in a restaurant. At Crave, he hopes to partner with Making Waves Academy, a local charter school, and Beyond Emancipation, an Oakland organization that supports young people emancipating from foster care.

Armstead also wants to transform Crave BBQ into a go-to place for events in the area. Starting in September, the restaurant will regularly host blues and jazz bands, as well as comedy nights and open mics.

"We're gonna make it into something great, because that area needs it right now," Armstead said.

Crave BBQ, at 1207 Hilltop Mall Road, is open Tuesday through Sunday from noon to 7 p.m. To learn more, visit ICraveBBQ.com or follow crave_bbq on Instagram.