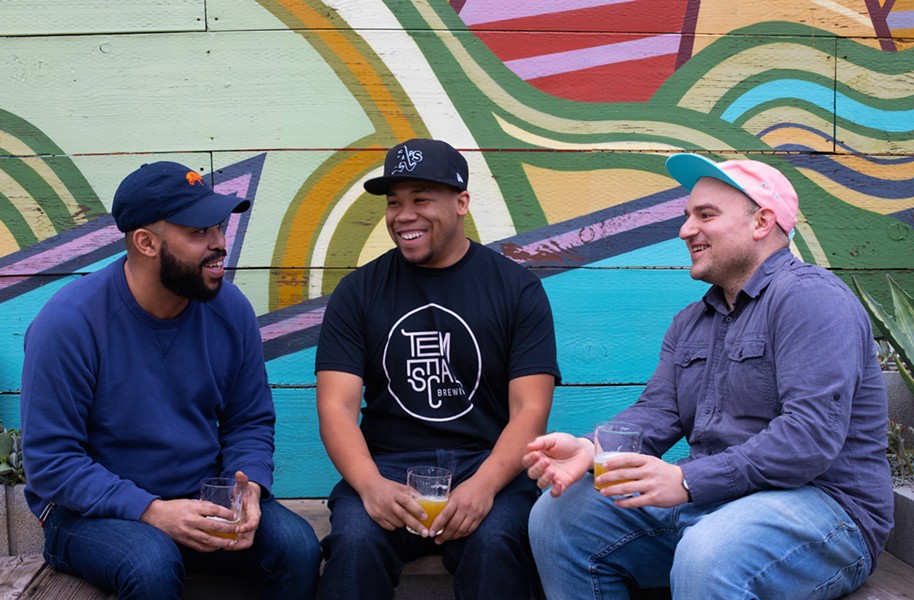 Who are some of the biggest producers and consumers of craft beer? An image of a bearded white man might pop into your head. But Temescal Brewing, Oakhella, and Dope & Dank are looking to change that.

“For years, craft beer has known there’s a diversity problem,” said Sam Gilbert, founder and owner of Oakland’s Temescal Brewing. “And everyone pays lip service to diversity, but nothing happens, or it doesn’t move past that.”

But Hella Halftones, at a Feb. 8 event to be held at Temescal’s Outpost in Jack London Square (621 Fourth St.), aims to talk about why diversity is so lacking in the craft brewing scene and come up with solutions for how to change that.

One of Temescal Brewing’s founding bartenders and event organizers, Joshua Diggs, took the lead in organizing Hella Halftones. Diggs got his start in the world of craft beer as a brewery tour guide and says he can count maybe three or four other people of color working in the craft beer industry in the Bay Area.

Temescal Brewing has hosted events aimed at making craft brewing more inclusive of women and the LGBTQ community, but this is the first public conversation they’ve hosted about racial diversity. “If you’re really genuine about a topic, it’s not gonna come to your front door,” Diggs said. “You have to go out there and be uncomfortable and talk to people. If people are feeling excluded, you have to go out of your way to make them feel included.”

A couple years ago, Diggs met Teo Hunter, one of the founders of Los Angeles Dope & Dank along with Beny Ashburn. So Diggs asked Hunter and Ashburn to get involved and come speak on the panel at the Hella Halftones event. Dope & Dank, whose motto is “Black People Love Beer,” was created to bridge the gap between communities of color and the craft beer community. Hunter came up with the idea when he was in line for a beer festival a few years ago and noticed there were no other black people at the event. “It was jarring,” Hunter said.

Craft brewing, Hunter said, has traditionally been something practiced in more rural areas. But as gentrification has seen more craft breweries opening in cities like Oakland — particularly in Black and Brown communities — the lack of diversity in who’s consuming and making beer is particularly concerning.

Hunter thinks part of the diversity problem is due to the way beer is advertised to communities of color. “The big beer companies have done a damn good job at just pandering and creating this image of what our relationship should be with beer, which is malt liquor, which is cheap, extremely high-octane, poorly made beer.”

But it can also be difficult to learn the lingo of craft beer, especially in an environment that’s dominated by white men. Diggs said he loves working at Temescal Brewing because it’s a place where anyone can learn about craft beer. “I have so many people from Oakland that grew up in the neighborhood that come and bring their friends. They tell me, ‘I like coming here because I feel welcome here … I don’t feel like I have to be a beer snob in order to walk through the door. If I … don’t know about beer, I can ask, and someone’s gonna help me.”

Knowing how to talk about craft beer doesn’t just help with enjoying craft beer — it can also lead to jobs in the growing industry. “We really started to have to shift to looking to see what we could do in terms of helping people understand how they can gain entry to the industry … [and] the way that they describe and break beer down, so they can potentially get more opportunities in taprooms, at craft breweries, in their community,” Hunter said.

But the event is also focused on making craft beer appealing and exciting to everyone. “Our Dope & Dank platform was created to … talk about craft beer not only in the way that all the craft beer geeks do it, but in a way that someone that loves hip-hop would talk about it,” said Hunter. The event will kick off with beer and food from Oakland’s Roderick’s BBQ. The founder of Oakhella, Seneca Scott, will be speaking on the panel along with Gilbert, Diggs, Ashburn, and Hunter. Oakhella, which is known for throwing day parties at community gardens in West Oakland with great food and music, will also be hosting an after party, with DJs Drow Flow and M.C. K~Swift.

The Feb. 8 event kicks off at 5 p.m. with food and beer; the panel will begin at 6:30 p.m. Tickets start at $3. To purchase tickets, visit EventBrite.com.
Prev
Next