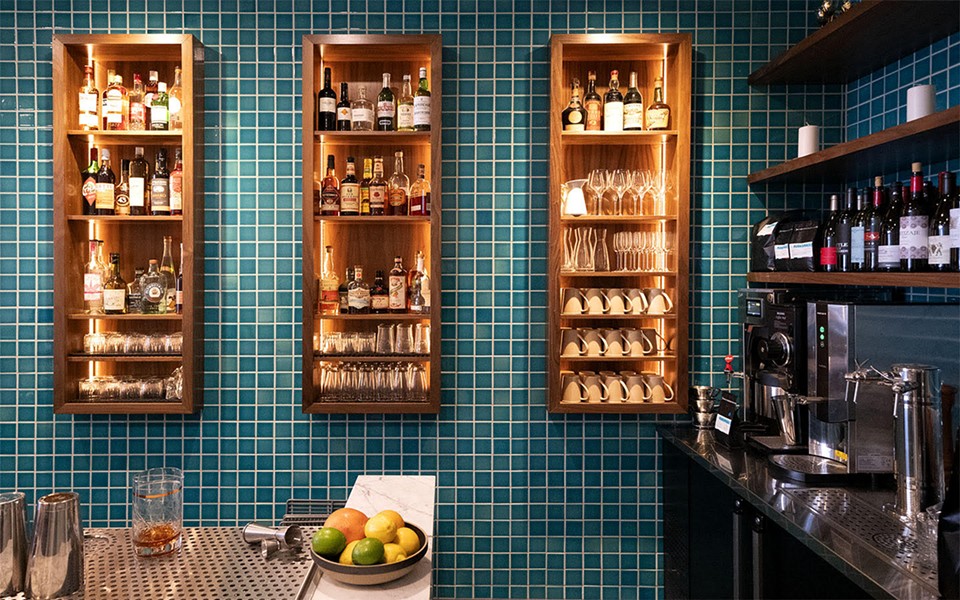 Ever wished you could sip coffee, wine, or a craft cocktail, plus shop for books and vinyl at the same time? At The North Light (4915 Telegraph Ave., Oakland), Temescal’s newest bar, cafe, bookstore, and vinyl shop, which opened on Jan. 17, guests can do just that.

Dan Stone, one of the North Light’s owners, lives in the Temescal district, just steps away from the North Light. He and co-owner Lee Smith created the concept based on what they felt was missing in the district. “The whole model of what we were doing was inspired by what we thought this neighborhood would be happy to have,” he said.

The North Light is open from 7 a.m. to midnight every day except Monday (North Light will eventually be open seven days a week), so you’ll find suitable refreshments for any time of day. The food menu comes from chef Ronnie New, who was the opening chef at Alamo Drafthouse in San Francisco’s Mission district. Though the kitchen is limited, Stone said, “It’s sort of like writing formal poetry, you have to work within constraints — and sometimes if you do that, the results can be even better than if you had everything you wanted.” The menu is primarily Mediterranean-influenced, and many of the plates encourage sharing.

For breakfast, you’ll find things like a breakfast sandwich with bacon, pepper jelly, a soft-boiled egg, and Manchego cheese, and a breakfast scramble made with patatas bravas. The lunch menu features a meatball sandwich, plus plenty of vegetarian options like a little gem salad with grapefruit and avocado, or baby beets with harissa. There’s also a daytime menu with bites like avocado toast, and a kids’ menu offering grilled cheese. Along with coffee, there are unusual drinks like a Cafe Du Monde shakerato, lavender-matcha soda, and cereal milk horchata. For those visiting in the evening, there’s a menu of bar snacks like sardine crostini and deviled eggs with blue crab and bacon. On the heavier side, there are plates like a whole roasted cauliflower, ricotta meatballs, and a flat iron steak.

Stone said The North Light is primarily a bar, so you’ll also find a Mediterranean-inspired bar menu designed by bar manager Den Stephens. There’s an amaro-heavy list of cocktails, suitable for both day and night, plus a wine list featuring wines from France, Spain, Italy, and Greece.

But Stone and Smith also love books and music. Stone is a writer, and he also founded and edited Radio Silence magazine, which merged literature and rock ’n’ roll. “This bar is sort of the physical embodiment of that magazine,” Stone remarked. Smith, formerly of Bill Graham Presents and Live Nation, is the founder of Prescient Entertainment.

On the literary side, you’ll find a curated collection of books from a wide range of authors, like Samin Nosrat and Michael Chabon. In keeping with The North Light’s kid-friendly attitude, there are also children’s books. Guests will be able to hear records being played all day long, and when the vinyl selection is officially rolled out in the next couple of weeks, it’ll feature a collection curated by Pat Spurgeon, the drummer of Oakland band Rogue Wave.

“There aren’t many places open in the afternoon here for somebody to go get a cup of coffee and work, or get a glass of wine and meet a friend,” Stone said. With cozy indoor tables and a bar, plus a covered outdoor patio, The North Light looks like a good place to do just that.
Prev
Next