The first year the pantry opened, 500 students came in to use it. Now, nearly 7,000 students use the UC Berkeley Food Pantry a year, out of 42,000 students on campus. 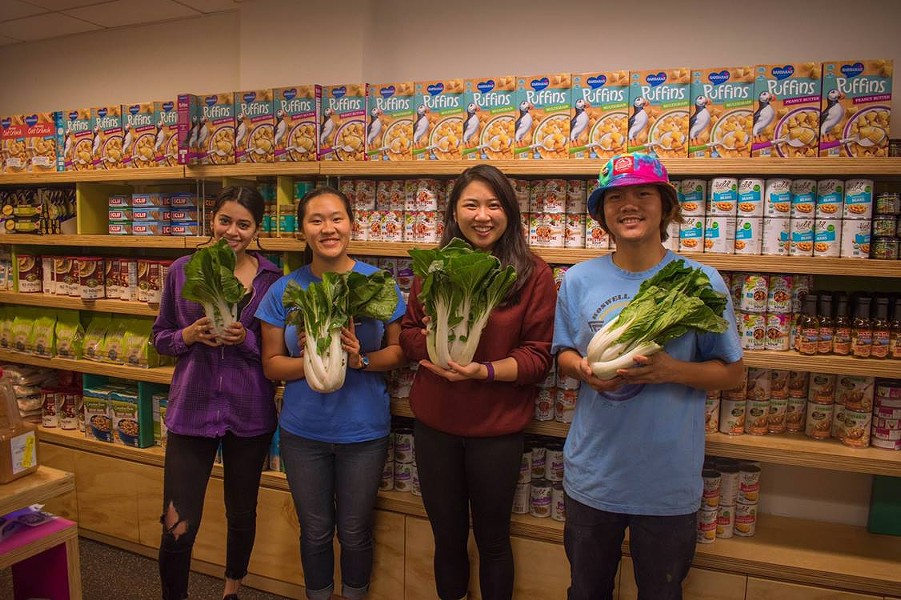 A study conducted across the UC system shows that 44 percent of undergrads and 26 percent of grad students in UC schools experience food insecurity, according to a report from the UC Global Food Initiative.

The UC Berkeley Food Pantry first opened its doors in 2014 and this summer was redesigned with the help of the College of Environmental Design. It’s located in the basement of the MLK Student Center.

Students who need food are allowed to take what they need in terms of produce and bread, but for shelf-stable foods such as pasta, canned beans, and more, they are allotted about five per visit, with a cap at two visits per month.

The organizers know that the pantry is just one point of entry for those who may have other needs — a short-term, if vital, way of supporting students. Some of them are referred to CalFresh (known as food stamps, or SNAP, in other states). Last year, 1,300 students signed up for CalFresh, and this school year, the Basic Needs Committee hope to sign up 3,000.

Reniel Del Rosario, an art major, is one such student who experienced food insecurity. Originally from the Philippines, he grew up in Vallejo in a family that utilized social security. During his second year, he walked into the food pantry.

That same day, he asked if he could volunteer there. Now, he is one of their star volunteers who helps on “restock” days — Tuesdays and Fridays — when new produce, dry goods, and other items come in. “I feel very satisfied when I do this,” he said. The food in the pantry is high quality and nutritious — staffers worked with a dietician to ensure what they’re ordering or receiving is healthy — and much of it is organic and local. There are instant udon bowls, organic soups, canned wild salmon, boxed cereals, canned organic sweet corn, and more.

By 11 a.m., 30 minutes before the door opens on days where items are restocked, there’s already a line forming.

Del Rosario also hopes to erase the stigma of being on food assistance. “If you need help, then you have a right to get services,” he said on a recent Friday morning while adding boxes of tofu to the refrigerator. “Everyone should have access to food.”

Stella Zhu and Ibrahim Ramoul are two paid student coordinators who manage 65 volunteers. The pantry is largely student-run, and students do the heavy lifting — organizing, restocking, and more. Some get academic credit for volunteering. “I wanted to be involved in tangible way in changing food system,” said Zhu, a senior majoring in sociology and molecular and cell biology.

Ramoul is a public health major and sees working on food systems and equity as a good application of his studies. The student coordinators buy 200-300 pounds of produce a week, with the rest of the produce donated from farmers markets such as the one in Kensington, along with Monterey Market, Daylight Foods, the Alameda County Community Food Bank, individuals, and UC Berkeley’s own farms and gardens.

Students are three times more likely than the average Alameda County resident to be food insecure: 44 percent versus 13 percent of residents at large. And 57 percent of UC students who are food insecure are for the first time.

Berkeley has additional assistance, including a food assistance program that is for students not eligible for CalFresh but who still need funding for food

“The pantry is an emergency support,” Prier added. “We’re really trying to take a structural and systemic approach and take a preventative model. Fundamentally, we know that students are facing food insecurity because financial aid isn’t enough.”

The UC Berkeley Basic Needs Committee, which oversees the food pantry on campus, advocated for several bills in the state alongside other UCs, Cal State universities, and community colleges that allowed students to sign up for CalFresh. Previously, college students were not eligible.

In addition to the food pantry, Berkeley is building a space next door for basic needs. It will offer workshops, help more students sign up for CalFresh or UC Berkeley’s Food Assistance Program, work with homeless students, and more.
Prev
Next