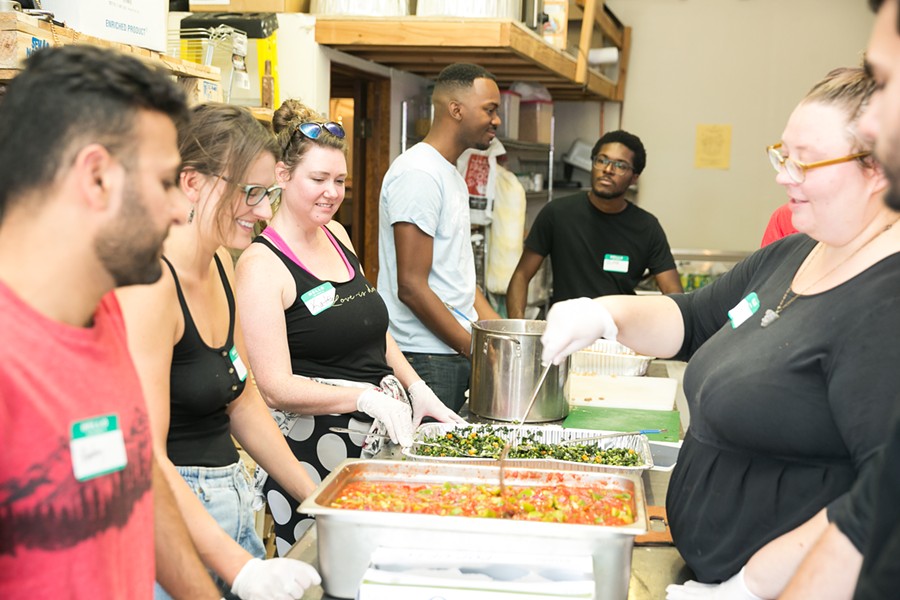 For East Oakland Burrito Roll’s founder Kira Clarence, making burritos is a form of direct action. Part of her inspiration for the project, she said, was “fighting Trump and fascism and just not wanting to numb out, and wanting to take action, help people around me.”

“It’s a crazy crisis that’s going on in the Bay Area with all the displaced people, and [I was] tired of walking by and looking the other way,” Clarence said.

East Oakland Burrito Roll is a monthly gathering of community members who volunteer to make a total of 500 burritos and distribute them to unhoused people, primarily in East Oakland. Volunteers also distribute supplies, like bottled water, fresh fruit, and dog food. Right now they operate primarily out of donated commercial kitchen spaces, and most of the expenses come out of pocket.

Clarence originally wanted to volunteer with other groups who give out prepared food to the unhoused, like Punks with Lunch and the San Francisco Burrito Project. But she found that she couldn’t make her schedule work with those groups. So in February, Clarence started making burritos at home with the help of her friends. “I figured I’d just start doing direct action myself on days I knew I could make it possible,” she said.

Clarence chose to focus on East Oakland because the camps of unhoused people there are smaller and tend to move a lot, meaning they often receive fewer resources than larger camps. She also worked with the East Oakland Collective, a community organizing group that, among other services, holds a bimonthly sandwich giveaway called Feed the Hood. When she first started out, the collective helped Clarence locate camps in East Oakland where she could donate burritos.

Clarence and her friends cooked for the East Oakland Burrito Roll in homes until July, when they began working out of donated commercial kitchen space. Then, they started recruiting volunteers from the general public. East Oakland Burrito Roll has worked in a variety of locations, including Food Foundry, Agnes Memorial Church, and even a bicycle nonprofit. They’re still looking for a permanent commercial kitchen space.

“To go and pay for a commercial space would just not be feasible, because the price of renting a space would cover the entire Burrito Roll for the month,” Clarence said. “So we’ve been trying to … find someone who’s also passionate about helping unhoused folks and isn’t trying to make that capitalist dollar off of us, and sees the good that we’re doing and the direct action we’re taking. We’re still putting out feelers and making calls and trying to find the right spot.”

Meanwhile, East Oakland Burrito Roll has been gaining new volunteers via word-of-mouth and Instagram. Volunteers typically meet on Friday nights to make rice, beans, and salsa — a process that Clarence said “involves a lot of chopping veggies and onion tears.” On Saturdays, volunteers roll the burritos and deliver them to local encampments. Volunteers can sign up for shifts as short as 1 hour.

Although the group hasn’t found a commercial kitchen space yet, the next East Oakland Burrito Roll will take place on Nov. 30 and Dec. 1. Events have also been scheduled for January and February 2019. To donate or volunteer, visit EastOaklandBurritoRoll.org.

Above all, Clarence hopes people take action. “You don’t need to come and volunteer with us in order to have empathy and help out your neighbors,” she said. “Anyone can do this. You don’t have to be a professional cook. You can just buy a few extra loaves of bread and make sandwiches.

“I’d be super happy to hear that other people helped out and fed other folks or gave them water. Or just had a bit more humanity, you know?”
Prev
Next