AB 2178 seeks to makes it easier for nonprofits to charitably feed people. But some activists say the law threatens to cause more harm than good. 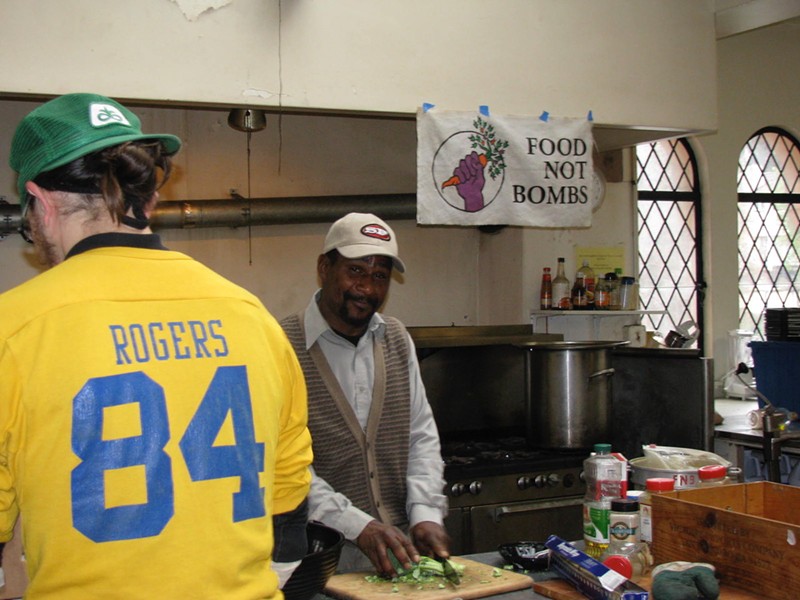 Keith McHenry, one of the co-founders of Food Not Bombs, has been arrested more than 100 times for illegally feeding people without a permit. All over the world, Food Not Bombs volunteers gather donations of fresh produce from local supermarkets and serve hot, home-cooked vegan meals several days a week in outdoor public spaces, like parks.

Traditionally, groups giving out hot food to the public in California had to register for food service permits, which can be costly and difficult to obtain. Under the new law, organizations that want to charitably feed the public are not required to have permits. Instead, they can register as limited service charitable feeding operations and pay a fee to the local enforcement agency, a process with fewer regulations than obtaining a permit. But the new law comes with strict limitations on the kind of food they can prepare.

Limited service charitable feeding operations can give away whole, uncut produce and prepackaged, shelf-stable food, like granola bars. They can also heat, portion, or assemble small amounts of commercially prepared food — for example, they can heat up canned soup or make sandwiches from packaged ingredients. They can also store or distribute frozen foods.

That means operations like Food Not Bombs that cook warm meals from scratch would not be able to register as a limited service charitable feeding operation because their food is not commercially prepared or prepackaged. McHenry said the types of food service allowed under AB 2178 aren’t actually very helpful for the homeless.

McHenry says Food Not Bombs’ policy is that they will never accept or apply for a permit, and they also don’t plan to register as a limited service charitable feeding operation. He acknowledges what Food Not Bombs does was illegal in California prior to the passage of AB 2178 (although some cities and counties chose not to enforce it), and will continue to be illegal under the new law. But McHenry is concerned that the new law will only lead to stricter enforcement surrounding charitable feeding. He’s recently seen a rise in anti-homeless organizations reporting Food Not Bombs events to the authorities in an attempt to push the homeless out of sight.

“My concern about the new law is … it’s being advertised [by lawmakers], ‘now it’s easier to get [registered]’ …. Then the anti-homeless organizations will be able to go to the Environmental Health Department and say, well now there’s this new easier [registration] for them to get, so why aren’t they getting it? It’s an attractive form of propaganda that’s now available to them.”

As to the food safety issue, Barbara Brust, founder of Consider the Homeless, which delivers homemade, hot soup to people on the streets of Berkeley, said she has never received complaints about anybody getting sick. She provides all new volunteers with information about food safety practices, makes sure they wear gloves, and uses a food warmer to keep the soup hot.

Brust said AB 2178 would leave “people where they need to either panhandle to buy [junk] food, or dumpster dive, and I think that’s a lot more unhealthy than getting fresh homemade food.”
Food Not Bombs will hold meetings at Omni Commons in Oakland on Nov. 10, 11, and 12 to discuss a statewide response to the new law.
Prev
Next