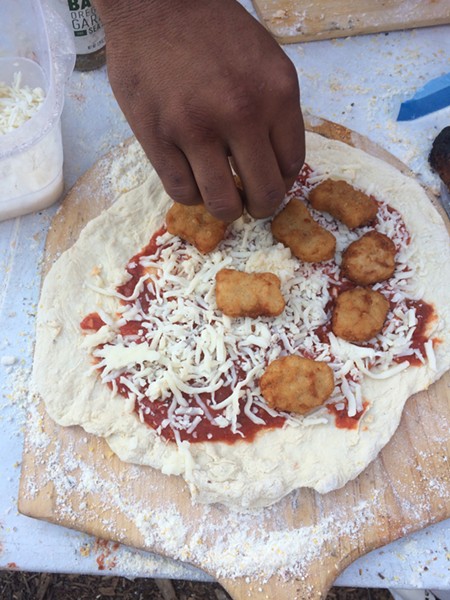 Last week, Miguel Elliott fired up his homemade oven and served dozens of pizzas to the local crowd: neighbors in a homeless encampment dubbed “The Village,” which is home to about 80 people.

“Most people here may not have experienced wood-fired pizza,” said Elliott, who owns Living Earth Structures, which specializes in building out of cob. “It’s considered somewhat of a luxury item. And since they don’t have access to other cooking utilities, it would be about the most appropriate place to have a wood-fired oven.”

Elliott, who had been a part of the Occupy movement, has come by the encampment before. There is no refrigeration, and there was no real way to cook until he brought the oven a few weeks ago. “I’d like them to learn how to make their own bread instead of having it donated, and have some creativity in the process,” Elliott said.

At the first pizza firing, people came out of tents, makeshift structures, and homes to have a slice. Many started making their own pizza. As the evening went on, people got more creative. One woman who came to check out the scene made a heart-shaped pizza. One man who was wearing his dog in a backpack began making a cheese pizza, and a minute later, one of his neighbors came by with a box of chicken nuggets and laid out the nuggets on top. Later, one man cut up hot dogs and put them on his pizza after the pepperoni ran out.

The pizza takes just a couple of minutes to blister and cook in the hot oven. “Pizza definitely has a unifying effect on the community,” Elliott said, as he busily turned the pies.

The Village is located at 23rd Ave. and 12th St. in Oakland. Many say there has been a sense of community cultivated here.

But city officials have told Village residents that everyone needs to leave the encampment by November, when the freeway nearby needs to be retrofitted. (The Express called Assistant to the City Administrator Joe DeVries but did not hear back.) “It just started to feel like a community, started to have some hope, and now the city is saying, ‘We’re going to tear it all down,’” Elliott said. “It’s difficult to keep people together.” 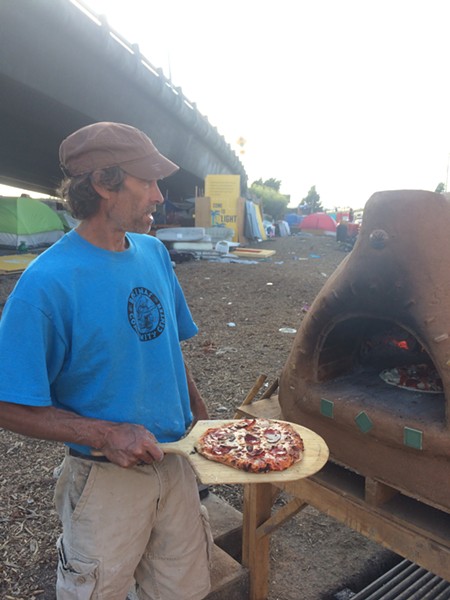 Still, the community is forging ahead. Elliott said he would like to bring more of his structures, which are made with wooden pallets, stuffed with insulation (including trash, plastic, and clothes), and covered with mud that essentially turns it into an adobe structure that he said is fireproof.

“My designs are considerably more affordable and they’re using all recycled materials, and the residents living here can help build them and learn a skill in the process,” Elliott said. He is hoping to raise some money to demonstrate at the Village how people can build these small homes using materials that are lying around. He estimated it costs between $700 and $1,000 to build one.

Kaleeo Acatar was one of the attendees and volunteers during the recent pizza party. He used to live under the freeway bridge in the encampment. Now, he works at Pixar as a dishwasher and as part of the nightshift maintenance crew. He’s saving up for a place of his own but currently lives in his car nearby. “None of the houses have a stove where they can cook,” he said. And the pizza? “It was delicious. It was definitely appreciated.”

The Village
Prev
Next