With Its Relocation, Vegan Eatery The Butcher's Son Expands Its Scope

The new space comes with a market area stocked with takeout food. 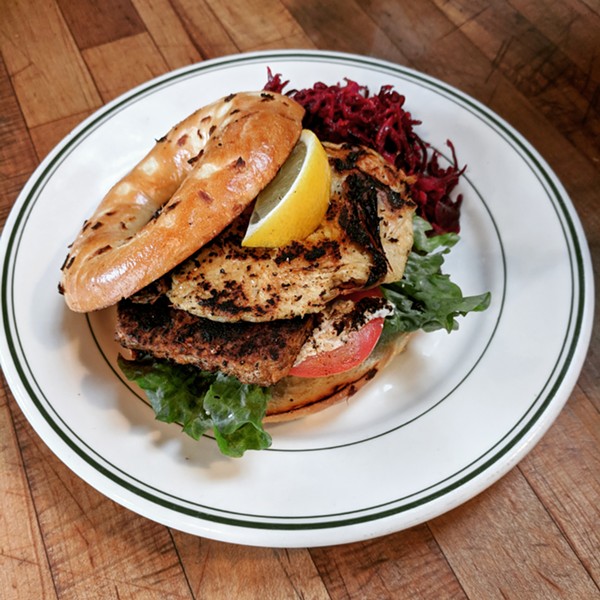 Your favorite vegan deli just got an upgrade. The Butcher’s Son, the Berkeley restaurant and takeout spot, re-opened last Thursday at 1954 University Ave., right across the street from the former location.

The new space, which is 1,300 square feet bigger, comes with a market area stocked with takeout food, more vegan meats and cheeses, and take-and-bake items like faux-chicken pot pies and lasagnas. They’ve also partnered with Curbside Creamery for custom ice cream flavors, debuting last week with an espresso brownie made with the Butcher’s Son’s brownies and Timeless coffee, and a chocolate-chip cookie dough ice cream made with Butcher’s Son cookie dough.

Started by brother-and-sister duo Christina Stobing and Peter Fikaris about two-and-a-half years ago, the Butcher’s Son has been extremely popular ever since. They had been thinking about a second location when Maker’s Common closed across the street in March. Instead of opening a second location, they decided to expand on what they already have going on and make it even better.

The Butcher’s Son makes almost all of its vegan meats and cheeses in-house, and offers an extensive menu of sandwiches, salads, and other offerings. Between the pulled pork sandwich, chicken parmesan in a garlic bread roll, and tuna melt, the Butcher’s Son ensures that vegans do not miss real meat. Everything on the menu is free of animal products — the house-made cheeses are cashew-based and other common ingredients are almonds, gluten, coconut, and soy (their menu comes with a large warning sign for allergies).

The shop’s cheeses are one of the standouts. The cheeses they make, from buffalo mozzarella to pepper jack, have an incredible texture that even melts like dairy cheese — a far cry from most grocery store-bought vegan cheeses. They also carry Violife’s cheddar cheese, which is free of common allergens like gluten, soy, and nuts.

The updated menu includes vegan fish, which wasn’t previously offered — smoked whitefish and catfish, to be exact, which both come in sandwich form like their blackened Cajun catfish. Fish can be added to salads, too. Brunch is still happening, including the whimsical house-made vegan doughnuts served inside a waffle. In addition, an omelet bar will be added in the upcoming weeks.

The space is now split in half, with the restaurant on the right and the market on the left. There’s also more outdoor seating, with a parklet space in the front and a few dedicated picnic tables in the back. The backyard garden space, shared with other local businesses, is a great place to enjoy a little tranquility during a lunch break or brunch. (The shared courtyard is dubbed the “rose garden,” not to be confused with the actual Berkeley Rose Garden.)

On opening day of the Butcher’s Son 2.0, the takeout area offered all sorts of goodies, including cheesecake, Timeless Coffee beans, and “Twix” bars. In the upcoming weeks, they’ll also expand their grab-and-go section.

Meanwhile, the marketplace sells ingredients for those who want to replicate some of Butcher’s Son dishes and use products from local businesses. Bagels come from gluten-free Odd Bagels; breads from Mariposa Bakery and Young Kobras; locally made tempeh from Rhizocali; the Butcher’s Son’s salad dressings; the house-made meat substitutes and cheeses; and jars of spices from Oaktown Spice Shop. “We want people to be able to make their own [dishes] at home using the same ingredients we use on our menu,” Stobing said.

The Butcher's Son
Prev
Next