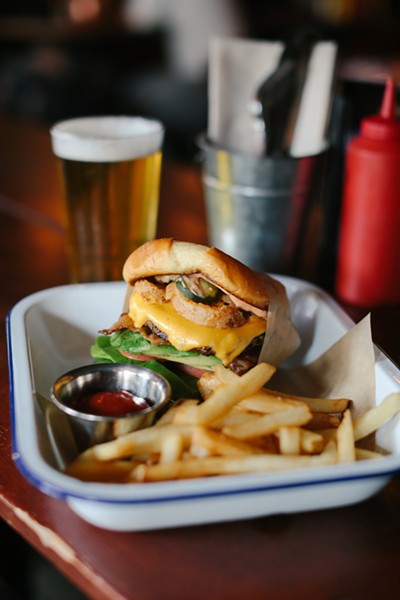 Oakland has a new dedicated sports bar, and the owners really went all out. The Athletic Club Oakland has 37 plasma TV screens and three projectors, and the owners clearly invested a bunch of money into the state-of-the-art sound system.

The bar and restaurant opened last Monday, just in time for Game 1 of the NBA Western Conference Finals. The line was out the door that day to enter the new establishment and catch the Warriors beat the Rockets.

The place still smells new, and that’s because workers were still hammering and getting the spot ready for opening. Previously Izzy’s Steak & Chop House, which shuttered earlier this year, the space at 59 Grand Ave. has been redone to create a casual and cozy environment.

Owners Miles Palliser and Ezra Berman actually met at a sports bar some 13 years ago, when Palliser worked as a bartender at Kezar Pub in San Francisco. They talked about opening their own sports bar for years and opened the San Francisco Athletic Club in 2014.

The bar tops are made from reclaimed basketball court in Palo Alto, and the back of the bar is made from reclaimed bleachers. There’s a trophy case in the middle of the room, shuffleboard, three pool tables, and metal cages that people can fill with baseballs. Customers can buy a baseball for $10, write a nice message on it, and drop it in the cages. Proceeds will go toward a local nonprofit; in San Francisco, they have donated about $5,000 to the Boys & Girls Club there.

One unique feature is buying beers by the case for a 15 percent discount, and the wait staff will bring the 24 beers in an ice-filled vintage cooler for parties of six or more, “kind of like bringing the tailgate inside,” Palliser said. Booths can be reserved ahead of time with a minimum food and beverage charge.

The “Skybox” level, previously office space, has been converted to a nice upstairs lounge area with dedicated screens that overlook the entire restaurant and bar. They serve sports bar food — think hotdogs, fries, grilled chicken-and-bacon sandwiches, a veggie burger, nachos, and the like, with wine on tap, beer on tap and in bottles, and cocktails with names such as “The Town.” (The bar menu was developed by Matty McGee from Flora and Era Art Bar and Lounge). The menu is currently limited but should expand soon with “boozy slushies” and other food options, similar to the San Francisco menu.

Palliser said that he hopes the sports bar will be welcoming and comfortable for everyone. That includes having clean bathrooms and hooks under the bar top to hang coats and purses — it’s all in the details.

For now, the Athletic Club opens at 4 p.m. daily, with hopes to add brunch this summer. For special sports events, they’ll also open earlier. They added that they won’t add a cover charge for any events, unless they have to pay for Pay-Per-View.

The Athletic Club
Prev
Next