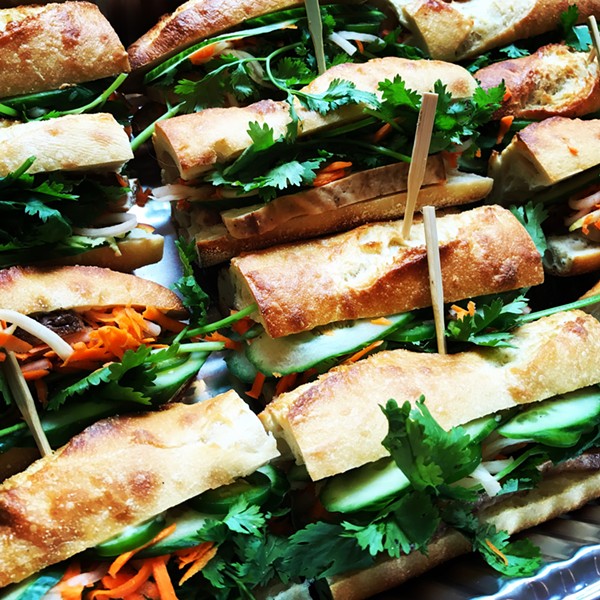 Bread & Butter comes from chef Alicia Smiley, a classically trained chef who worked at critically acclaimed San Francisco restaurants such as Boulevard and Bix before launching her own plant-based catering company, well.fed. If all goes according to plan, this will be her first brick-and-mortar restaurant, which she hopes to open on Oct. 1. (Smiley said she can’t reveal the exact location yet, because it’s still being secured.)

For Smiley, the 800-square-foot, 16-seat space with some outdoor seating is an ideal fit. She expects to retire her catering company after opening Bread & Butter. “I’ve never wanted a large restaurant,” she said, explaining why she’s declined other opportunities in the past. “This will be small and intimate, and that’s more the feeling I like: feeding people personally.”

Bread & Butter will serve desserts, breakfast pastries, toasts, focaccia loaded with toppings, salads, and “really nurturing, quality entrées,” Smiley said, all in an industrial-chic setting full of greenery. Though Smiley is passionate about plant-based cooking, she might offer some egg options as well. “It’ll be at least 99 percent vegan,” she said.

One of her plant-based specialties is seeded breadsticks made out of a slowly fermented dough, which sits for a few days before being rolled in seeds and vegan Parmesan. She also makes what she calls “hippie bread,” a sandwich loaf sweetened with agave that forms the base for thick-sliced avocado toasts.

With the aim of inclusivity, Smiley also plans to offer a daily “community meal,” an entrée served with a side of bread that she won’t take any profit from. In the morning, it might be oatmeal with fruit and nuts. For lunch, it might be a simple curry with vegetables over rice. Smiley wants to keep it around $5 with a donation jar also available for folks who can’t pay the full amount.

“It’s really important to me,” she said. “I want it to be accessible to everybody. I don’t want anyone to feel priced out of nutrition.”

She’s also excited to showcase a wealth of locally made vegan products, such as those from the Butcher’s Son in Berkeley. The standard butter of Bread & Butter, though, will be Miyoko’s vegan European-style cultured butter, which is made from a mix of oils and cashews. Smiley decided to include “butter” in her restaurant name partially with this vegan alternative in mind.

“I love to challenge people’s ideas. Butter doesn’t just mean dairy butter. There’s also almond butter, peanut butter, coconut butter,” she said. “Also, I like the double meaning, that it’s my daily bread and butter. I like the idea of the daily sustenance you need to live your life.”